An Open Letter from a Tamil to the Media Swamis 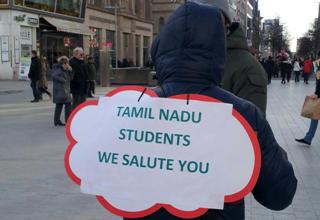 The media is awash with a plethora of views on the recent developments in Tamil Nadu – the students' upheaval, the DMK's pullout from the UPA and the state Assembly passing a resolution seeking a referendum on Tamil Eelam.

However, the 'erudite' edit and op-ed page writers of English papers and 'informed' talk show specialists chattering on national news television channels have just one thing to say: Tamilians are on the wrong.

Be it caustic or sarcastic, the remarks suggest or bluntly say that the people and politicians of Tamil Nadu cannot influence foreign policy or that the development in the state is tantamount to secessionist politics.

Such irresponsible and ill-informed remarks only indicate that the self-styled experts care two hoots about the sentiments of the people at the grassroots or, for the matter, at level of Tamil society.

That the latest churning – on the streets, the political party conclaves and Assembly – was triggered by the people's aspirations is something the 'experts' do not want to acknowledge. Whether they are informed enough to fathom it is also not known.

It is in this context it becomes clear that the English media has not yet found a single 'expert' to put forward the sentiments of the people of Tamil Nadu vis-a-vis the Sri Lankan imbroglio in its right perspective.

Is it because those who own and run the English media organisations are not Tamilians? Or is it because there is no Tamilian worthy of writing on the issue?

Or is it because the English media is in cahoots with the decision makers at the highest levels – be they politicians, bureaucrats or from the diplomatic corps – and hence does not want to find any merit to the arguments put forth against certain government decisions? Yes, people of Tamil Nadu ask such questions, though no one wants to answer them.

Even without naming the media organisations and the 'experts', one can prove that the commentaries and analysis have been consistently anti-Tamils and the authors seemingly have a pathological hatred for Tamils.

The ‘specialists’ are cherry picked - they either live outside Tamil Nadu with no understanding of the local social dynamics or they belong to the elite group in the state that demands superiority on the basis of birth.

But what the media does not realise is that the commentaries and views cannot change the opinion of the Tamil people in any way.

All that it has done is to create anger and disrespect for the English media, which is seen more as ignorant. That those newspapers are read or channels watched in Tamil territory is no indication of the acceptability of the English media among the people (excluding that elite class that I mentioned earlier) as a dependable disseminator of facts.

Yet, if the shows go on and the newspapers continued to roll out of gargantuan printing machines, it is because the Tamilians can take criticism and believe in democracy, not like some newspapers and channels that try to define democracy in their own way.

Even when a politician, who cannot win an election to a panchayat ward on his own strength, threatens Tamilians with his plan to form his own army to counter the protestors in the state, they do not ask him as to why he gets worked up when they demand action against the Sri Lankan president. Does he have any personal link with such mass killers? Tamilians never ask.

For, they know that their strength lies in the collective aspiration of the people: To get justice for the Tamil people of Sri Lanka.

But the chattering talk show specialists and rambling writers feel that the Tamil people have no right to have an aspiration that they do not share. And with media organisations prodding them to express their flawed views, they go berserk, be it on print or TV.

But, no media house, however powerful it is in terms of financial and other powers, can change the basic desire of people.

Even after the English media ignored the many Tamil groups that were organising different forms of protests on the Sri Lankan Tamil issue for many years without giving any coverage for their activities and treating them with utter contempt, the message they wanted to send across to the people reached them effectively.

It was those sustained campaigns on various issues relating to Sri Lanka that led to the students upheaval, which spread throughout the state, making the two major Dravidian parties in the state to sit up and take note.

Despite the outsiders and elite insiders sitting together on television channels and predicting the failure of the students' agitation, it triumphed.

The decision of the DMK to pull out of the UPA and the AIADMK government’s resolution in the Assembly in favour of a separate Tamil Eelam were landmark decisions made only after the students' unity had sent shivers down the spine of the political class.

Even the Congressmen have woken up, rather late, to the reality of the people's mood and are telling their party to boycott CHOGM.

So, the blabber of the chattering and rambling experts have lost their relevance in the socio-political landscape of Tamil Nadu, though they linger around pronouncing unsolicited verdicts, questioning the patriotism of the Tamil people.

In democracy, questioning a government's action or decision is not anti-national. But the English media gives self-appointed guardians of national interest unfettered freedom to run down anyone whom they perceive as inferior or who do not share their views.

What happened to the watchdog bodies that should be monitoring the media's prejudices and excesses? Well, the heads of such bodies go around seeking pardon for convicts.

Does that imply that Tamilians do not come into the radar of most of the powerful people – those from the judiciary, bureaucracy, diplomacy, central government and national media in particular?

Should Tamilians just nod in agreement to whatever the north Indians have to dictate to them? Including how the Tamilians should look at people who speak Tamil?

It exposed the people to the real travails of their brethren back in their homeland. There cannot be a Tamilian who has not heard a first-hand story of discrimination in Sri Lanka, where it is a well-known fact that Buddhist monks have brought shame to Gautama Buddha through their violence – one of them killed Solomon Bandaranaike in cold blood after getting access to his palace without being frisked just because he was in the saffron robes.

When one such monk was just pushed around, the media went to town as though it was a case of massacre.

Tamilians knew that Kenneth Lane in Egmore is a place where you can pick on at least a dozen Sinhalese people any time. But no one has ever done any harm to them.

When some emotional youth wants to express his token protest to the Sinhalese for their inhuman treatment of the Tamils back home, the English media sees it as genocide.

When a real genocide happened it kept quiet. When a demand was made to charge those responsible for the genocide, it calls its experts to discuss and decide that there is no need for that.

When students of Tamil Nadu hit the streets to press for the demand on genocide charges, it lets random self-centered people make denigrating statements.

When the students force political parties to take a firm stand on the genocide question, it says India should not be guided by Tamil Nadu.

Whom should India be guided by then? Not by its own citizens? Only by a few citizens who appear on TV screens and write for English newspapers?

It is time rest of India does some introspection. Are not the Tamilians Indians too? If so, why are their aspirations being mocked at on TV shows and newspaper editorials?

(The writer is a journalist who wishes to remain anonymous)