From Guyana, memorable echoes of Tamil 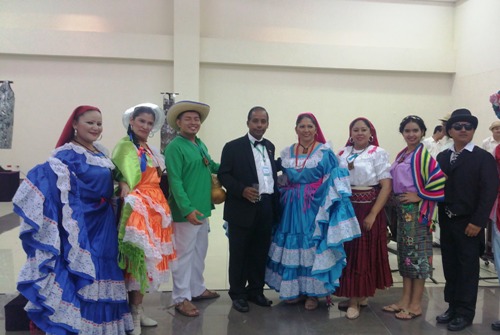 As a member and Secretary of the Parliamentarians for Global Action (PGA), Malaysian Chapter, I had the privilege of attending the recently concluded 37th PGA meeting hosted by the Parliament of El Salvador at their capital San Salvador. Parliamentarians from 140 countries are members of this august assembly.

The theme of this year’s meeting was ‘The Role of Parliamentarians in Support of Peace and Security’ with an overriding objective of promoting universality and implementation of the Arms Trade Treaty (ATT) and separately, the Biological and Toxin Weapons Convention (BWC).


I have been a prime mover of the Arms Trade Treaty, which Malaysia has signed and I have been pressing Malaysia to sign up as a member of the International Criminal Court to benefit our people.

After a fruitful meeting at El Salvador, I was of the view that I should not return home after undertaking a painful 48 hours of journey without connecting with at least a part of my culture and ethnic brethren.

I had heard that the majority of people living in the nearby country of Guyana were Indians. Further, after the General Elections a politician from a Tamil descendant family had been elected as its Prime Minister.

It was enough motivation for me to visit Guyana and get a firsthand experience of the rich culture, its people and the natural bounty.

On landing at Georgetown, the capital, it was exciting to learn that Guyana is the third smallest country on mainland South America. The legacy of British rule is reflected in the country's diverse population, which includes Indian, African, Amerindian, and multiracial groups.

Guyana also has the distinction of being the only South American nation in which English is the official language. Guyana, a member of the British Commonwealth, got its independence from the United Kingdom on May 26, 1966 and became a republic on February 23, 1970.

The largest ethnic group in the country is the Indo-Guyanese (also known as East Indians), the descendants of indentured laborers from India, who make up 43.5 per cent of the population, according to the 2002 census.

They are followed by the Afro-Guyanese, the descendants of slaves from Africa, who constitute 30.2 per cent. Guyanese of mixed heritage make up 16.7 per cent, while the indigenous peoples (Amerindians) make up 9.1 per cent.

The Tamils from Tamil Nadu started arriving here from 1838 onwards.

Agriculture and mining are Guyana's most important economic activities, with sugar, bauxite, rice, and gold accounting for 70–75 per cent of export earnings. Other exports include timber, diamonds, garments, molasses, rum, and pharmaceuticals. There is a vast scope for developing the highly unexplored tourism industry.

Guyana’s Prime Minister, Hon. Moses Veerasamy Nagamootoo, a veteran journalist, and freedom fighter, had assumed office in May after a very long stint as the leader of the Opposition.

The PM has been in politics for a very long time having joined the freedom movement way back in 1964 at a tender age of 14 years.

We visited the PM’s humble office, which was a beautiful wooden building. Rev Father Britto SJ and Berk who hail from India and are serving in the local Church accompanied me. The meeting was not only warm, but very cordial.

The PM was equally excited by our presence and spoke on local and international issues. He inquired about my involvement in the PGA and I told him the significance of becoming a member of the International Criminal Court (ICC) and to sign and ratify the Arms Trade Treaty (ATT).


He was keen to start the process of discussion and eventual membership of the ICC and ATT. This gave me great satisfaction as these two issues are very closely connected to making the world more humane, just and peaceful.

I have now communicated this discussion to the PGA board, which will facilitate and work with the PM and his Government on these and other important issues undertaken by the PGA.

The PM acknowledged his ancestral connection with Tamil Nadu. He has written a book where he mentions the early settlement of Tamils as fishermen in Guyana. The PM also confirmed that his ancestral tombs had Tamil writings on it.

It was painful to see that Tamil language is hardly spoken in Guyana today and almost every Tamil has a mixed heritage now. Most of them have converted to Christianity, which has brought them closer to western culture.

I urged the PM to initiate a Tamil diaspora meeting and event in Guyana, as there are a sizeable number of Tamils in this part of the world especially in the West Indies like Trinidad and Tobago, Jamaica etc. He was open to consider this idea and expressed the wish to visit India to explore his roots in Tamil Nadu.

He said that the External Affairs Minister of Sri Lanka has invited him to visit Jaffna to see the progress made by the new government. He empathized with the innocent Tamil victims of the civil war and hoped justice would be done to them.

I left Guyana with very pleasant memories and with hopes that Guyana and Malaysia would come closer to help each other.

YB M. Kula Segaran, an ethnic Tamil, is a Member of the Malaysian Parliament, and represents Ipoh Barat