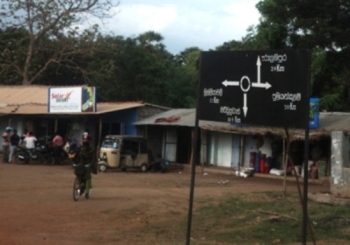 The much-awaited report of the Office of the United Nations High Commissioner for Human Rights   Investigations on Sri Lanka (OISL) released in Geneva on 16 September has identified war crimes and crimes against humanity committed in Sri Lanka between 2002 and 2011 by both sides to the conflict.

The report makes 39 specific recommendations to the Sri Lanka government to implement.  One of them is to enact legislation establishing an ad hoc “hybrid special court, integrating international judges, prosecutors, lawyers and investigators, mandated to try war crimes and crimes against humanity, including sexual crimes and crimes committed against children with its own independent investigative and prosecuting organ, defence office, and witness and victims protection programme.”

The USA, prime mover for an international investigation on Sri Lanka in the last three consecutive sessions of the UNHRC in Geneva, has taken a U turn this year and is content with a “domestic mechanism.”

Within hours of the release of the report, The Tamil Nadu Assembly passed a unanimous resolution urging the Narendra Modi government to insist on an international investigation against Sri Lankan war crimes.

Welcoming the resolution, M Karunanidhi, leader of the DMK, said India should move a resolution for an independent and credible international probe into war crimes in Sri Lanka while S Ramadoss, leader of the Pattali Makkal Katchi wanted the Sri Lankan armed forces to be tried by an international court.  Thol Thirumavalavan, leader of the Viduthalai Chiruthai Katchi, said the hybrid courts would not render justice to the war victims.  The UNHRC should take steps as per earlier resolutions.

The OISL report has laid bare the horrific level of violations and abuses that occurred in Sri Lanka, including indiscriminate shelling, extra-judicial killings, enforced disappearances, harrowing accounts of torture and sexual violence, recruitment of children and other grave crimes.

Patterns of abductions leading to forced recruitment of adults by the LTTE, which intensified towards the end of the conflict, were also documented. In the last few months of the conflict, the LTTE increasingly recruited children below the age of 15 which would amount to war crimes if established in a court of law, the report says.

One of the shocking findings of the investigation was the extent to which sexual violence was committed against detainees, often extremely brutally, by the Sri Lankan security forces.  Sexual torture had taken place in a wide range of detention locations, both during and after the conflict.  Not a single perpetrator of sexual violence is known to have been convicted.

Claiming torture and other forms of cruel, inhuman or degrading treatment was wide spread, the report notes that some of the commonly used centers had rooms set up with torture equipment.

Repeated failure of successive domestic inquiries to bring justice has led to scepticism, anger and mistrust on the part of the victims, particularly since many of the structures responsible for the violations and crimes still remain in place, says the report.  The Sri Lanka government says in response, “This report represents a human rights investigation and not a criminal investigation, and will ensure that its contents as well as recommendations receive due attention of the relevant authorities.”

A free and fair international investigation will bring out too many skeletons out of the closet.  The LTTE, a formidable militant organisation dedicated to the liberation of Sri Lanka Tamils from Sinhala hegemony, was declared a terrorist organisation first by India, which other nations, including the European Union and the USA followed suit.

Until 2005, the LTTE remained invincible and successive regimes in Colombo tried to come to terms with the militant organisation.  In the 2005 Presidential election, Mahinda Rajapaksa, who till then had an impeccable human rights record, entered the race as a peace candidate with the support of the LTTE against Ranil Wickremesinghe of the United National Party, the present Prime Minister.

On winning the election, Rajapaksa sent emissaries to New Delhi to help him carry forward his peace offensive.  He was rebuffed.  Then he sought back channel talks with civil society in Tamil Nadu to reach an acceptable solution to the ethnic problem.

Foreign Secretary Shivshankar Menon shot it down.  Instead, Rajapaksa was offered all help, military, material and intelligence, and the offer to mobilize international support to defeat the LTTE.  The US President George Bush, champion of fighting global terrorism, backed India.

The Congress was voted to power in 2004.  It had a single-point programme of annihilating the LTTE, as far as its Sri Lanka policy was concerned, unmindful of its glorious past of supporting liberation struggles worldwide.

The key players who helped achieve this goal were MK Narayanan, former IB chief who failed to stop the assassination of Rajiv Gandhi even after getting advance information of the plot and suppressed the only full videograph of the actual assassination from the Special Investigation headed by D Karthikeyan, Shivshankar Menon, TKA Nair, Vijay Nambiar at the UN headquarters who kept Secretary-General Ban Ki-moon misinformed about the ethnic cleansing going on in Sri Lanka, and his brother Lt.-Gen (Retd) Satish Nambiar, deputed as military adviser to Rajapaksa.

That all of them hail from Kerala is a mere coincidence.  Bunker-buster bombs used to destroy the LTTE’s subterranean hideouts and firebombs used in the LTTE-held areas in the North-East were found to be of US origin.  China, Israel and Pakistan also joined India in the ultimate decapitating of the LTTE.  Any wonder the USA has changed tack in Geneva this year?

Although the OISL avoided the word ‘genocide,’ what happened at Mullivaikaal at the closing stages of the Eelam war where about 300,000 Tamils were huddled together and more than 40,000 of them were killed was nothing but genocide.  According to the UN, “any of the following acts committed with intention to destroy, in whole or in part, a national, ethnical, racial, or religious group as such; killing members of the group, causing serious bodily or mental harm to members of the group, deliberately inflicting on the group conditions of life calculated to bring about its physical destruction in whole or in part, imposing measures intended to prevent births within the group, and forcibly transferring children of the group to another group,” constitute genocide.

By this yardstick the treatment meted out to the Tamils in Sri Lanka is nothing but genocide.  It was not a mere civil war but a war against its own people.  It is true the LTTE pursuing a separatist movement in the Northern and the Eastern Provinces was killing countless innocent people but the government forces had ensured that it was wiped out completely.

Historically, the Tamil and the Sinhalese regions had been distinctively separate and autonomous.  It was the British colonial rule that brought the two regions as a single nation called Ceylon.

India’s Sri Lanka policy has undergone a “radical reset” after the BJP was voted to power.  The Bodu Bala Sena, radical Buddhist organisation, had proposed a Buddhist-Hindu Peace Zone in South Asia and the BJP was not averse to it.  Venerable Gnanasara Thero, general secretary of the BBS, disclosed that his organisation was holding talks with the RSS at the highest level.

According to the Policy Framework of the BBS, Sri Lanka should be declared a Sinhala-Buddhist nation.  Thero said the minorities could preserve their identity only under Buddhist suzerainty.

The position India takes in Geneva to the Tamils’ plea for international investigation will expose the BJP’s behind-the-scene shenanigans in Sri Lanka.  The OISL report is a tide in the affairs of Sri Lankan Tamils.  Taken at the flood, it leads them on to fortune, as Shakespeare advised Brutus.  “Omitted, all the voyage of their life is bound in shallows and in miseries.”