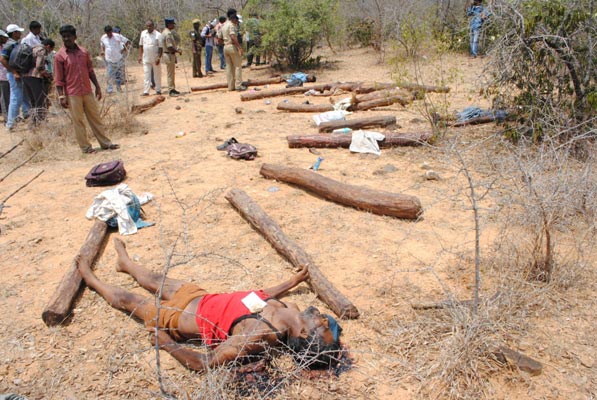 ‘Encounter’ in police lexicon is a euphemism for killing unarmed civilians in staged gun battle. It was perfected in the forests of Srikakulam in the composite State of Andhra Pradesh in 1969 to prevent ultra-Left movement that originated in the summer of 1967 at Naxalbari in the district of Darjeeling in West Bengal from taking roots in the State.

Driven out of Naxalbari, the movement spread to Srikakulam, the northern-most district of AP. Kasu Bramananda Reddy, Chief Minister, and Jalagam Vengal Rao, Home Minister, in consultation with the chief of police, decided to liquidate anyone found propagating Naxalism.

Hundreds of young people, men and women, mostly tribal, including a 11-year-old boy, were shot dead. Each operation was called “encounter with the police.” No magisterial inquiry was held on these killings.

Since then, encounter killing has become standard operating procedure with police throughout the country. The killing of 25 unarmed civilians in two separate ‘encounters’ in erstwhile Andhra Pradesh, five in the Telangana region and 20 in the Seshachalam forest on the foot of Tirumala Hills, abode of Lord Venkateswara, on 7 April, has shocked the conscience of the nation.

The five killed in Telangana were said to be members of a terror outfit called Tehreek Ghalba e-Islam allegedly plotting to assassinate Narendra Modi. Some reports went to the extent of hailing the police for foiling attempt on the Prime Minister.

A culture of impunity pervades the police which is responsible for such targeted violence as in the Batla House incident in Delhi or Ishrat Jehan killing in Gujarat. The five unarmed under-trials were taken in a police van handcuffed to their seats and escorted by 17 armed guards from Warangal central prison to a court in Hyderabad for a hearing wherein judgment was to be pronounced soon.

Vikaruddin Ahmed, one of the five victims, is alleged to have tried to snatch a weapon from the guards. The guards in turn shot all the five dead inside the van itself to protect their lives, says the official version.

It is too farfetched and frivolous for belief. While the police have every right to protect themselves in the course of the discharge of their duties, they are not authorised to indulge in extra-judicial killings.

The Supreme Court has called such killings “state-sponsored terrorism.” Coming as it does in the wake of a Tees Hazari court in Delhi acquitting all the 16 surviving Provincial Armed Constabulary men of Uttar Pradesh police involved in the cold blooded shooting of 42 Muslim youths of Hashimpura locality in Meerut for want of an eye witness to identify them, the police escorts from Warangal involved in the killing of the five alleged terrorists have nothing to fear. Dead men tell no tales.

The Seshachalam massacre is a different kettle of fish. Felling and export of red sanders - pterocarpus santalinus is its botanical name and known as lal chandan in Hindi - is endemic in Andhra Pradesh.

Historically the wood has been valued in China since the Qing Dynasty period and is in great demand in Japan also for its rarity and multiple uses. Clandestine export of this precious wood is a billion dollar business in which politicians, forest officials and the police have a share.

Those killed are only coolies engaged by contractors to cut trees at night under the cover of darkness. They are not smugglers. Young tribal men from Jawadhu Hills in Tiruvannamalai district of Tamil Nadu are lured by brokers with offer of fancy wages and pressed into extracting red sanders from the forests in Chittoor, Kadapa and Nellore districts of Andhra.

If any of them get caught by the authorities in Andhra Pradesh, the brokers disown them and they end up in jails. Their families are too poor and illiterate to engage lawyers to get them released on bail.

More than 1,200 such woodcutters from Tamil Nadu are languishing in jails in AP for want of legal aid: 545 in Chittoor, 291 in Kadapa, 162 in Nellore and the others in Anandapur and Kurnool. The TDP government of Chandrababu Naidu found keeping them in jail no answer to the problem.

A few days ago, it authorised M Kantha Rao, DIG, head of the Red Sanders Anti-Smuggling Task Force (RSATF), to open fire on those engaged in felling red sanders. His men were equipped with weapons of offence like AK47 and Self Loading Rifles.

RSASTF men were said to have spotted a gang of 100 woodcutters from Tamil Nadu on the sacred hills of Tirumala on the night of 6/7 April. When challenged, 20 of them threw stones at them. The Task Force responded by shooting the 20 dead in predawn darkness.

Marksmanship of the average policeman in India is such that he cannot hit an elephant on its broad side from 10 metres with his shotgun. Kantha Rao’s men deserve President’s police medal for the accuracy they have shown in identifying the 20 stone-throwing woodcutters out of 100 in the dead of night without any night vision equipment.

RSASTF is silent on what happened to the other 80 in the gang. The absence of any stones at the scene of this epic encounter made the RSASTF embellish their story with some colourful details in the First Information Report No 43/2015 filed at Chandragiri police station which surfaced five days after the incident.

The victims, according to the FIR, had formed themselves into an unlawful assembly and pointed three guns at the police and attacked with arrows sans bows. The combing police staff opened fire on the opponent group “in the right of private defence and to safeguard their lives.”

According to experts, RSASTF resorted to “burst-firing” without warning which explains the internal organs of the victims were blown out. The bullet injuries on face, head and chest of the victims contradict the police version that they randomly fired on the woodcutters.

AP Director-General of Police JV Ramudu has said “Kantha Rao and his team have done a commendable job.” The RSASTF head justified the action saying he was given a mandate to protect precious forest wealth and that he would continue to do his duty “to the best of his abilities.”

The Andhra Pradesh Police Manual states categorically, “Police are expected to work within the framework of law and are not to take law into their own hands on the plea that the existing law is not sufficient.” (Rule 964-1-A).

Enough evidence has emerged that the killing of the 20 was pre-planned and deliberate. The area where the killing took place has no red sanders. The logs displayed neatly between the dead bodies of the woodcutters had markings painted on them indicating they were brought from government depots.

The Madras High Court, meanwhile, directed that the bodies of the victims be preserved till further orders while the AP High Court pulled up the police for not registering a case of murder against Kantha Rao’s team.

Red sanders was placed on the banned list by the Convention on International Trade in Endangered Species (CITES) in 1995. The International Union for Conservation of Nature seconded it. Unmindful of the threat of extinction of the species, the AP government has approached the Union forest ministry to lift the ban on red sanders.

According CITES, there should be 50 per cent reduction in the species in the last three generations to declare it endangered. Also the extent of occurrence should be in less than 5,000 sq km and at least 20 per cent of the plant should have been felled. The number of mature trees should come down to 250.

In the opinion of Bojjala Gopalakrishna, States minister for environment and forests, lifting the ban on felling and export of red sanders would curb smuggling besides generating revenue.

The tree grows on shale sub-soils at an altitude of 2,000 to 2,500 feet. Planting of red sanders could be taken up on a commercial scale in the southern parts of the Eastern Ghats in Chittoor, Kadappa and Nellore districts.

High quality red sanders fetches up to Rs. 1.5 crore per tonne in the international market. The Chandrababu Naidu government is waiting with bated breath for a positive response from the Centre even as civil society is crying for justice to the victims.

﻿Delhi to become first state to have 1,500 electric buses: Gahlot