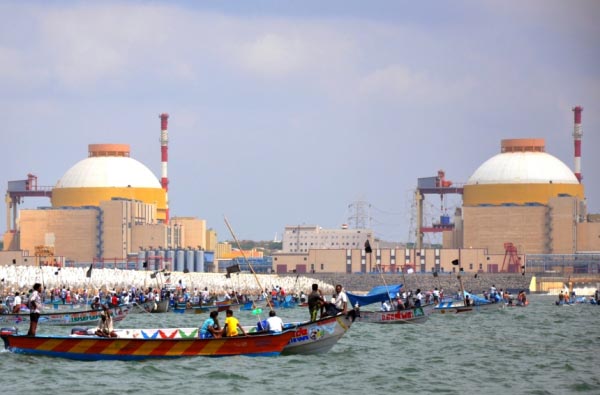 All is not well with the Koodankulam Nuclear Power Project (KKNPP) in southern Tamil Nadu. The first 1,000 MW unit of what is described as the “world class third generation plant” was reported to have attained criticality in July 2013.

It has however been shut down for the last two weeks as the turbine of Unit 1 has conked out requiring replacement which would take several months. The Atomic Energy Regulatory Board (AERB) had tested every component and their functioning before issuing all clear certification for commercial operation. How come they did not detect any fault in the turbine?

Earlier in October the turbine sustained severe damage as some components came loose and broke its blades. This episode brings into question the quality of the components and construction of the plant, and the rigour of the quality verification exercise carried out by AERB.

The statement said they were concerned at the total lack of accountability of the Department of Atomic Energy, Nuclear Power Corporation of India Limited and AERB with respect to KKNPP and were worried about the safety ramifications of persisting with commissioning of Unit 1 without a thorough and independent review of the plant, its components and the process of setting it up.

The 2014 Nuclear Materials Security Index prepared by the Washington-based Nuclear Threat Initiative has ranked India 23rd out of 25 countries. The main reason for India’s low ranking is the absence of an independent nuclear regulatory mechanism. The AERB established in 1983 is not an autonomous body; it is under the Department of Atomic Energy.

The Comptroller and Auditor-General in its Performance Audit on Activities of AERB, tabled in Parliament in August 2012, said the legal status of the regulator continued to be a subordinate of the Union government and recommended that AERB be made an autonomous body.

“For this purpose, it should be created in law and should be able to exercise necessary authority in the setting of regulations, verification of compliance with the regulations and enforcement of the same in cases of non-compliance.”

During its three decades of existence, AERB has not even formulated a nuclear radiation safety policy in spite of a specific mandate in the 1983 order of its constitution. The Public Accounts Committee of Parliament endorsed the recommendation of CAG, saying, the DAE should take necessary steps urgently “so as to ensure that the nuclear regulator becomes an independent and credible body at par with similar regulators in other countries.”

The Parliamentary Standing Committee on Science and Technology, Environment and Forests found the Nuclear Safety Regulatory Authority Bill introduced by the UPA government in the Lok Sabha in 2011 grossly inadequate to make AERB autonomous. The Bill has lapsed. The BJP government should give top priority to bring forward a new Bill to strengthen AERB and make it truly autonomous. If only India had a genuinely independent regulatory body, KKNPP would not have found itself in its present predicament.

The manner in which Koodankulam Units 1 and 2 have been constructed represents everything that is wrong with India’s nuclear establishment, the eminent citizens’ statement said.

Equipment for the nuclear reactor and related infrastructure arrived long before they were erected and had to spend years exposed to corrosive sea air. Instrumentation and other cables that had to be laid before the construction of the containment dome arrived well after the dome was completed. As a result engineers had to demolish portions of the dome to insert several kilometers of cabling.

There have been many cable-related accidents and deaths at the plant. This is not only unprecedented in the history of nuclear power plants but also worrisome. It compromises the integrity of the containment dome and highlights the casual and unplanned manner in which an extremely delicate and highly risky facility such as a nuclear reactor has been constructed.

Many components and critical equipment that had gone into the plant were obtained from corruption-tainted Russian companies. The procurement director of Zio Podolsk, Sergei Shutov, was arrested and prosecuted by the Federal Security Service (successor to the KGB) for producing a set of sub-standard equipment for the VVER-1,000 nuclear power plants in China (Tianwan), Iran (Busher) and Koodankulam.

Alexander Murach, director of another Russian supplier company, Informtekh, was convicted for fraud and sentenced to three years imprisonment for selling counterfeit measuring equipment for the nuclear plant’s turbines.

When the People’s Movement Against Nuclear Energy asked the NPCIL under the RTI Act for a list of equipment and components supplied by Zio Podolsk, it replied, on 20 February 2013, “No information regarding any investigation against Zio Podolsk is available to NPCIL.” When the same question was put to AERB, it answered evasively, “Selection of company for supplying any equipment to NPCIL is not under the purview of AERB.”

Although the agreement between India and the erstwhile Soviet Union for the KKNPP was signed in 1988, the first unit was scheduled to be synchronised only in December 2007 and the second unit in December 2008. SK Aggarwal, then project director, however, asserted, “The project officials have targeted to complete the works for synchronisation of both the units in March and September 2007 respectively.”

Ever since, officials of NPCIL, with the help of a pliant and uncharacteristically meek media, have been putting out cock-and-bull stories about KKNPP and taking the people for a ride. Even former Prime Minister Manmohan Singh was not spared. He was misled into announcing in Moscow on 15 December 2011 that Unit 1 would be “commissioned in two weeks.”

Again he was fed with misinformation to declare at the BRICS conference in Durban in March 2013 that the project would certainly be commissioned by the end of the following month, April. According to a former chairman of the AERB who does not want to be named, Unit 1 of KKNPP has got into a major control instrumentation problem and power cannot be generated.

Having come to this conclusion, the nuclear establishment is playing a charade as if they are sorting out all problems and will produce power in stages that could take a few weeks to months. What had happened in Koodankulam in July last year was “just a formal counterfeit commissioning,” in utter disregard of Supreme Court orders.

Everything was done in utter secrecy. At the time of “attaining criticality” itself KKNPP authorities admitted the fission did not produce sufficient heat to boil water to generate steam for running the turbine. They have also admitted to using diesel intermittently.

In the three-month period between November 2013 and February 2014, the plant had purchased 1.2 lakh litres of diesel. NPCIL data reveals that it has purchased diesel worth more than Rs. 28 crore for KKNPP since July last.

Asked in a RTI application about diesel purchases for KKNPP, NPCIL replied: “The purchase of diesel is for operation of some of the plant’s equipment like auxiliary boiler. The quantity of diesel consumed for the operation of the equipment will ultimately divulge the design details and would entail breach of commercial confidence, trade secrets or intellectual property and would harm the competitive position of the third party.”

It would appear that the power produced so far at the Koodankulam ‘nuclear’ plant is nothing but oil-fired thermal power. It is time NPCIL came clean on the Koodankulam project and became more transparent.