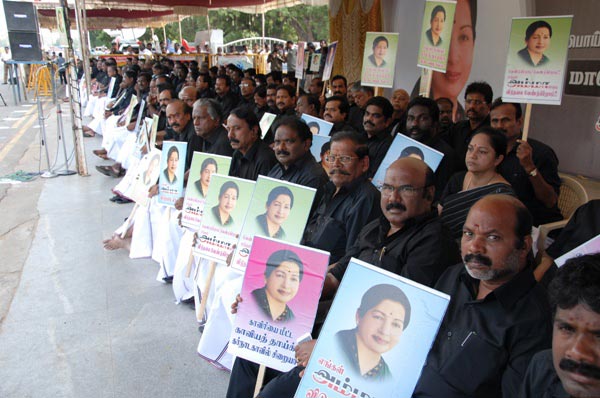 If political and economic freedoms have been siblings in the history of liberty, it is incestuous couplings of wealth and power that poses the deadliest threat to democracy,” wrote Al Gore, former US Vice-President, in his book “Assault on Reason.”

He said if wealth could be easily exchanged for power, the concentration of either could double the corrupting potential of both. Quoting from Gore’s book, John Michael Cunha, the Bangalore special court judge who had convicted and sentenced three-time Chief Minister of Tamil Nadu Jayaram Jayalalithaa to 4-year imprisonment and a fine of Rs. 100 crore in the disproportionate assets case, observed that heady mix of power and wealth was the bottom line of this case.

Huge accumulation of wealth by the accused in collaboration with Sasikala Natarajan, live-in companion, foster son VN Sudhakaran and J Ilavarasi, niece of Sasikala, all staying under the same roof over a short span of five years, was a telling example of how power had led to concentration of unlawful wealth posing veritable danger to democratic structure.

It was proved in evidence that at the beginning of the check period Jayalalithaa was in possession of total assets worth Rs. 2.01 crore, including that of Jaya Publications and Sasi Enterprises. By the end of April 1996, it had risen to Rs. 53.60 crore as determined on the basis of the actual cost incurred for the acquisition of these assets.

She was able to buy the 900-acre Kodanad plantation for Rs. 7.5 crore against today’s guideline value of Rs. 3 crore an acre. In Wallajabad, near Chennai, 100 acres of land was acquired where the guideline value for an acre is Rs. 40 lakh.

Examining these acquisitions, Cunha was shocked to find that a sub-registrar was summoned to Jayalalithaa’s Poes Garden residence in Chennai and made to register six documents without even entering the names of the purchasers and those properties were grossly undervalued. As Chief Minister, Jayalalithaa drew a token salary of just Re. 1 a month, a total of Rs. 60 in the five years. “The magnitude of the assets acquired by the accused should be viewed in that background,” the judgment said.

The Supreme Court in the case of Niranjan Hemachal Sashittal vs. the State of Maharashtra, (2013 (4) SCC 642), had ruled that “corruption is not to be judged by degree, for corruption mothers disorder, destroys societal will to progress, accelerates undeserved ambitions, kills the conscience, jettisons the glory of institutions, paralyses the economic health of a country, corrodes the sense of civility and mars the marrows of governance.”

The Prevention of Corruption Act provides for stringent punishment for proved offences. Section 13 (2) of the Act lays down that “any public servant who commits criminal misconduct shall be punishable with imprisonment for a term which shall not be less than one year, which may extend to seven years, and shall also be liable to fine.”

Cunha said that when the legislature intended to eradicate corruption by providing for deterrent punishment, it was the duty of the court to effectuate the purpose of the Act. What aggravated the offence of Jayalalithaa was her occupying the position of Chief Minister. It has often been observed, “just as those at high places behave, so others below.”

If persons holding higher positions indulge in corruption, not only those below get encouraged to indulge in corruption, but also the persons holding higher positions will not be in a position to exact honesty from them or to take action against delinquent officials. Any leniency or misplaced sympathy would prove disastrous to the entire societal life.

The argument that the case was foisted on Jayalalithaa at the instance of her political rivals, 18 years have elapsed from the initiation of the proceedings and that she had been voted to power in 2001 and 2006 did not cut much ice with Cunha. He blamed the accused for taking advantage of procedural trammels of our legal system in keeping the penal consequences at bay for the last 18 years.

Taking into consideration all the facts and circumstances, Cunha said, “I am of the view that this case calls for stringent punishment.” The law provides for a maximum imprisonment of seven years. The ends of justice would be met if the accused was sentenced to more than half the prescribed term, Cunha observed, and ordered attachment of all the immovable properties acquired illegally.

The huge quantity of gold and diamond ornaments seized from her residence and produced before the court, after setting apart 7,040 grams of gold with proportionate diamond jewellery, should be sold to the Reserve Bank of India or the State Bank of India by public auction and the proceeds thereof could be adjusted towards the fine, he ruled.

Judge Cunha has risked his life and created a milestone in the realm of justice in India by removing a sitting Chief Minister at the helm of her popularity and incarcerated her in the high security Parappana Agrahara prison in Bangalore.

But the emotional outburst of AIADMK sympathisers, unbecoming public display of grief by her erstwhile Cabinet colleagues, unruly behavior of her party workers, shouting and the slanging match by the army of her defence lawyers both inside and outside the court, and the conduct of prison officials in Bangalore have not brought credit to the rule of law.

From the time the judgment was pronounced on 27 September, Tamil Nadu has been kept on the boil by the AIADMK functionaries with the help of hired crowds. It has been a strange spectacle to see the ruling party workers going on the rampage stoning and setting fire to State road corporation buses and destroying public property.

Private schools and colleges, mostly owned by politicians, hold students hostage by closing down their institutions to protest the judgment. R Visalakshi, president of the TN Private Schools Association, justifying the closure, said, “It is our duty to express grief over Jayalalithaa’s conviction.”

A group of self-appointed clergy comprising ‘Bishop’ Prakash, ‘Pastor’ Gnanaprakasam and ‘Rev’ Milton, at a joint protest meeting outside the Parappna Agrahara prison prayed aloud, “Oh God, knowing it is a politically motivated case, do a miracle and set Jayalalitha free so that she can continue as Chief Minister. We plead in the name Jesus Christ, Amen,” making a mockery of Christianity.

Barring a miracle, Jayalalithaa cannot resume as Chief Minister in the foreseeable future or contest election for the next 10 years. A Supreme Court Bench headed by Justice KT Thomas had made it clear that when a conviction was on corruption charge against a public servant, the appellate court or the revisional court should not suspend the order of conviction during pendency of the appeal even if the sentence of imprisonment was suspended.

“It would be a sublime public policy that the convicted public servant is kept under disability of the conviction in spite of keeping the sentence of imprisonment in abeyance till the disposal of the appeal or revision.