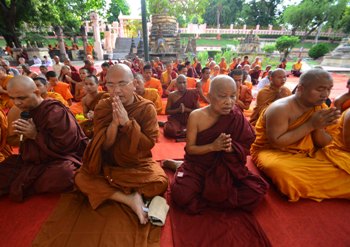 Suddenly, a group of monks, with heads clean shaven and wearing saffron & red robes, emerge out of nowhere on a dark street in Colombo.

Armed with machettes, stones and other weapons, and their faces deformed by the messages of hatred that they hurl, they head towards the Grandpass Mosque and start stoning it.

As windows shatter, the devotees inside the mosque are caught by surprise and try to escape. But some of them are captured by the Buddhist monks, who then beat them savagely.

These images, shown on the local television, may date from August 2013, but the attacks on the Muslim minority in Sri Lanka have only increased. According to Colombo Police, nearly 20 mosques were attacked last year.

Buddhist extremism? The Buddhist religion seems to have acquired quite another facet in Sri Lanka and some other countries of South and Southeast Asia.

In Myanmar, the Rohingya Muslims have been victims of a fairly widespread and long-lasting ethnic cleansing by the Buddhists, criticised by Human Rights Watch and others. In southern Thailand also, the Muslim insurgency since 2004 has led some Buddhists to take to the arms.

In Sri Lanka, six years after the end of the civil war in which the government forces inflicted a heavy defeat on the separatist Tamil Tiger movement, it is now Muslims and Christians, who are the new victims of violence and harassment. In the Muslim quarters of Colombo, fear reigns.

Mohamad, an old man who runs a textile boutique along with his daughter on the outskirts of Colombo, was one of the victims of the attacks.

"My boutique was ravaged at the beginning of the year by monks and other persons. They came in large numbers and I did not see them come in a group. They pushed me behind the boutique and vandalised it entirely," he says, wringing his hands. He looks around warily and whispers: "I begged them to spare me but they hit me with sticks."

The Muslims, mainly from India or traders from the Arab nations, have been living in Sri Lanka for nearly a millennium.

They have mixed with the local population and mainly speak Tamil and live on the eastern board of the country. Today, they make up about eight percent of the 21 million inhabitants of Sri Lanka.

Yet, soon after the end of the civil war in the north and as economic redevelopment began, the ills of the society - inflation, corruption and rising cost of living - need a scapegoat to carry the blame.

Preservation of the Sinhalese Buddhist culture is the stated principal objective of the Bodu Bala Sena (BBS), an extremist Buddhist organisation created in July 2012 by monks.

The method of BBS is radical - to demonise Muslims by propagating rumours and falsehoods about them. "The Muslims are stealing our jobs and monopolising the economy in order to enrich themselves and thence dominate us and the country," says a young member of the BBS during a meeting organised by the group last August in a Colombo suburb.

The young monk, dressed in a saffron robe, appears to be a victim of a true brainwashing by the organisation. He multiplies the insults against Muslims before adding, "Christianity and Islam are indulging in mass conversions amongst the poorest persons by enticing them with money and food."

Thanks to the support of influential personalities, the BBS has some victories to its account. It obtained a prohibition of commercialisation of certified hallal meat.

Recently, the secretary general of the organisation, Galaboda Aththe Gnanasara, declared that "Only the monks can save the Sinhala race."

He added that the monks were ready for the battle, if needed. "Our country is a Sinhalese country and we are the unofficial police here to ensure that our culture and traditions are preserved properly."

For Amit, a Buddhist Sinhalese taxi driver, however, "these extremists are neither Buddhists nor monks. They only wear robes in order to scare people and very rare are the Buddhists with the courage to criticise a monk."

Buddhist extremism in Sri Lanka appears to be more a conservative political movement based on the preservation of the Sinhalese race.

The development of such extremism is also a boon for the government and many of its influential members directly support the BBS.

"This is a political strategy aimed at dividing the population by spreading the image of an Islam and a Christianity which threaten the Sinhalese culture," explains Joseph, a Christian Sri Lankan of Tamil origin who fled the civil war.

A number of journalists and politicians fear a resurgence of aggression, which could indeed lead to more serious conflicts between the communities or the worst-case scenario, another civil war.

Nevertheless, President Rajapaksa and his party, the Sri Lanka Freedom Party, easily managed to consolidate their political influence during the conflict with the LTTE, allowing the president to gain a comfortable majority in the elections that followed soon after the end of the civil war.

Other political analysts estimate that extremist members of the ruling party would like to see Sri Lankan society fractured once again along racial and religious lines with the objective of capturing a consolidated majority vote by frightening them with the 'dark ambitions of the minority communities'.

After 30 years of an extremely bloody and vicious civil war, the country still does not seem to have resolved the problem of integrating its minorities.

The priority of the government is to attract investors. From time to time, small groups of the Buddhist majority Sri Lankan opposition get together to denounce these invocations to racial hatred.

They carry out peaceful protest marches and candle-lit vigils, reciting the teachings of the Buddha: "Hatred can never be stopped by hate. It is Kindness that leads to reconciliation."