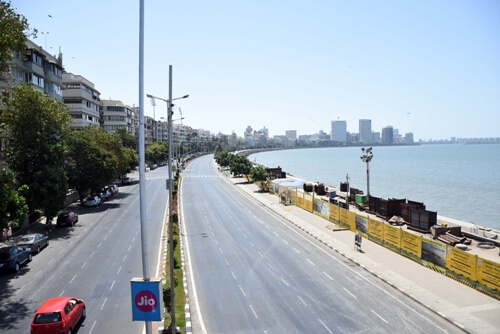 Mumbai and Pune - which figure among the red list of 11 cities in the country - also rank among the earliest and worst-hit by the Covid-19 pandemic, officials said here.

Though the Centre's assessment came after analysing the alleged lockdown violations in the 11 cities, the problem of Mumbai and Pune is compounded further by their sheer huge population figures.

Also, in Mumbai, Dharavi - Asia's biggest slum and the world's most congested area - has significantly added to the Covid-19 figures.

Moreover, Dharavi is largely a slum pocket compared with the rest of Mumbai which has glittering districts standing cheek by jowl with shabby slums.

Dharavi has touched 168 total Covid-19 cases, including 30 added on Monday, and 11 deaths till date.

In view of the blatant lockdown violations despite at least 11 lanes in the area being strictly isolated, Mumbai Police Commissioner Parambir Singh personally led a posse of 500 policemen on a march in Dharavi on Monday to reinforce norms and health safety rules.

Pune, however, follows a distant second with 594 positive cases and 49 deaths so far.

As far as the Mumbai Metropolitan Region is concerned, it has recorded 3,607 positive cases (out of 4,666) and 155 fatalities (out of 232). MMR comprises regions of Mumbai, Mumbai Suburban District, Thane, Palghar and Raigad districts.

Interestingly, the state has largely avoided the Corona scourge being spread by those who attended the Tablighi Jamaat event in Delhi with Maharashtra recorded around 50 such cases only - negligible compared to the massive total of 4,666 Covid-19 cases here.-IANS