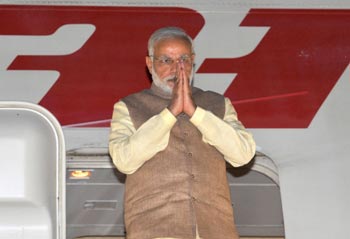 Making a strong pitch for reform of the UN Security Council, the G4 countries of India, Brazil, Germany and Japan on Saturday said that the international body needs to be reflective of the present geopolitical world order and not of the past century.

Modi, addressing the summit, said the global institutions, especially the UNSC, continue to reflect the wisdom of the century left behind, "not the century we live in".

"We live in a fundamentally different world from when the UN was born, faced with complex, and undefined challenges."

"The subject for reforms in UNSC has been the focus of global attention for decades. Unfortunately without progress so far," he said, stressing that the Security Council "must include the world's largest democracies, major locomotives of the global economy, and voices from all the major continents".

He said the commencement of text-based negotiations of the UNSC earlier this month "is an important first step but it must be carried to its conclusion in the 70th UN General Assembly".

Speaking next, Rousseff, in her brief remarks, said that the G4 is celebrating 10 years since its formation and added that the UN General Assembly today has 193 members while the 15-member Security Council, with five permanent members, is "insufficient representation" of the changed world order.

She said that collective peace in the world "is under threat", the result of efforts for bringing in change have not been very substantial, and "the UNSC remains the main pending issue".

"We need a council that will reflect the proper representation of world powers.. and is effective," she said, adding that Brazil gives its "firm commitment" to G4 efforts.

Merkel said it was 10 years since the four nations began the effort and are committed to the idea and the need to work towards reform of the UN.

Merkel said the world has changed since the formation of the UNSC 70 years ago with state and non-state actors, terrorists, and "I have never seen as many refugees", there are natural disasters.

"It makes it incumbent on the UN to reform, of the UNSC to better reflect the distribution of powers. We need to be prudent and talk to the others to change the format of the UNSC," she said.

"Not just the four of us, others too have voiced similar views," she said, and added that the group should take along others who share similar views.

Abe said the first meeting of the G4 in year was a "historic golden opportunity".

"Thanks to the efforts of Modi, and Rousseff and Merkel we are getting together, we must respond to voices of the majority of nations" seeking reform of the UNSC.

Abe said since the 2004 meeting of the G4, the situation in the world has changed, "there is a mounting momentum for change".

Earlier this month, the UN General Assembly adopted a negotiating document for long-pending reforms of the UNSC and the US, one of the Security Council's permanent members, said it is committed to India's inclusion as a permanent member.

India is making a strong bid for a permanent seat in an expanded Security Council, which currently has five permanent members -- China, France, Russia, Britain and US. Ten non-permanent members are elected for two-year terms by the General Assembly.

On Friday, in his address to the United Nations Sustainable Development summit, Modi made a strong pitch for reforms in the Security Council.

"We must reform the United Nations including its Security Council so that it carries greater credibility and legitimacy and will be more representative and effective in achieving our goals," he said.

India is the single largest contributor to the UN Peacekeeping operations and has been seeking an enhanced role in the UN's decision-making process. - IANS