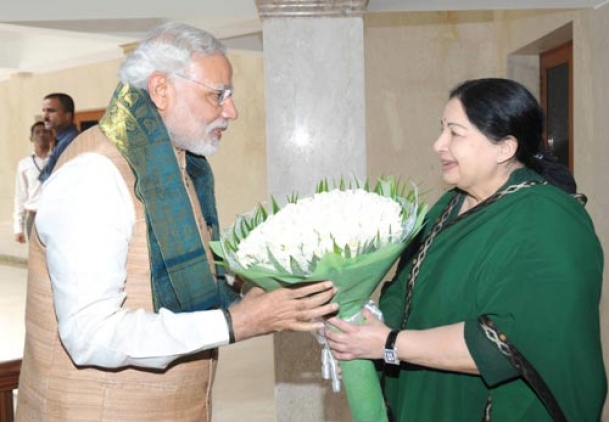 In a memorandum submitted to Modi when he called on Jayalalithaa at her residence here, the chief minister also sought a consensus on the Goods and Services Tax (GST) Bill.


She wanted Modi to form a Cauvery Management Board and the Cauvery Water Regulation Committee and prevent Karnataka from building dams across the river.

Modi met Jayalalithaa -- who hosted lunch for him -- for some 50 minutes after launching the National Handloom Day and India Handloom brand.

In her memorandum, Jayalalithaa said Katchatheevu was an island of 285 acres off Rameswaram in the narrow Palk Strait that divides Tamil Nadu and Sri Lanka and was once a part of Ramanathapuram district.

"It was originally under the ownership of the Raja of Ramanathapuram for which there is sufficient documentary proof. The Indian fishermen enjoyed traditional fishing rights in and around the island of Katchatheevu," she said.

After agreements in 1974 and 1976, Katchatheevu was ceded to Sri Lanka. The fishermen of Tamil Nadu have since been deprived of their fishing rights around the islet, she said.

Jayalalithaa said Katchatheevu was ceded to Sri Lanka illegally because the Supreme Court had ruled in 1960 that any territory owned by India can be given away only through a constitutional amendment.

"India should, hence, take active steps to abrogate the 1974 and 1976 agreements and retrieve Katchatheevu and restore the traditional fishing rights of the fishermen of Tamil Nadu," the memorandum said.

Referring to the problems of Sri Lankan Tamils, Jayalalithaa said their distinct identity and cultural presence was the guiding principle behind the India-Sri Lanka accord of 1987.

That accord, which led to the deployment of Indian troops in Sri Lanka, triggered the 13th amendment to the Sri Lankan constitution.

"The process of securing the right to self determination, through democratic decentralization by the 13th amendment ... should be the springboard for Sri Lankan Tamils to eventually realise the aspiration of Tamil Eelam," the memorandum noted.

"I strongly urge the (Indian) government to take all possible steps to ensure that the process of democratic decentralization, which is integral to the survival of the Tamils in Sri Lanka, is expedited," she said.

On the contentious GST bill, Jayalalithaa asked Modi to arrive at a broad consensus on issues like the compensation period and methodology, revenue neutral rates and floor rates with bands.

She also voiced her opposition to the GST Council as it impinged on the legislative sovereignty of parliament and state legislatures.

She urged Modi not to grant techno-economic clearance and environmental clearance to Karnataka's two reservoir schemes at Mekedatu till the formation of a Cauvery Management Board.

The chief minister sought the deployment of central security forces at the Mulla Periyar dam in Kerala, which is maintained and used by Tamil Nadu. - IANS