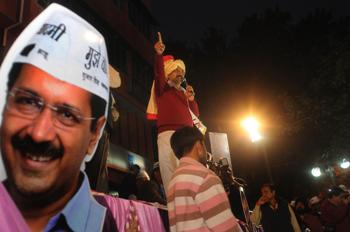 The Delhi assembly poll campaign has been one of the most boisterous and keenly fought with political parties resorting to new and innovative methods of campaigning with magic shows, street-corner plays, flash mobs and music mehfils to share their vision and promises.

"Singing songs while walking for campaigning helps us in connecting with the masses because it directly strikes a chord," Nandan Mishra, an Aam Aadmi Party (AAP) volunteer, told IANS.

Mishra, an IIT-Kanpur alumnus and former bank employee, heads the "Play For Change" campaign under which a group of artistes carry musical instruments and distribute pamphlets, outlining the party's policies, among the crowds.

"We play songs like 'Vande Matram' and 'Har Karam Apna Karenge' and while doing this we are on the move. This helps us in maintaining an eye-to-eye contact with the people. It is more of an emotional connect we form with them," he said, adding the party doesn't believe in preaching.

While AAP is attempting to strike a musical chord with the people, the Bharatiya Janata Party (BJP) is taking the traditional route with 'nukkad natak', or street-corner plays, and magic shows.

"We have been very active on the field since Jan 29 and have been organising 7-8 shows daily across the city. On the one hand, we are reaching out to the illiterate
people via magic shows and on the other we are talking about the good work done by Prime Minister Narendra Modi through street plays," coordinator Lokesh Sharma told IANS.

However, the Congress doesn't believe in a pompous campaign drill, relying instead on the background and comprehensive surveys to chalk out a suitable plan for individual candidates.

"Apart from the rallies and day-to-day meetings with the people, our candidates hire a promotion agency that goes out on the field and tries to learn about the voters' woes and submits a report. Based on this, the candidate formulates his action plan," a Congress spokesperson, who refused to be identified, told IANS.

"We also install LED screen at some unauthorised colonies which project the area candidates' mission and vision for their constituencies," he added.

Going a step forward AAP, whose major chunk of support comes from the working class, is also trying to establish a connect with the "elite".

"Flash mobs are a great way to connect with people in malls and posh localities like south and central Delhi," Anand Raj Singh, who organises flash mobs for AAP, told IANS.

"We dance on energetic and patriotic numbers like 'Ummedon Wali Dhoop', 'Jai Ho' and others and then we give a small speech elaborating on the blueprint of the party's policies," said Anand Raj Singh, who has been organising flash mobs since Dec 25.

For voters, such campaign strategies remain in their minds and help them make an informed decision.

"Rallies have become a ground for politicians to attack each other in public. But flash mobs and street plays focus on the plaguing issues while also outlining their answer to such problems. This is why such measures connect with us (voters)," said Aakash Sarin, a businessman from east Delhi. - IANS