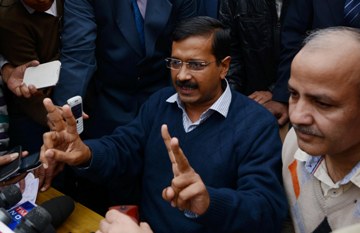 The Editors Guild of India Friday condemned the repeated attacks on the media by Aam Aadmi Party leader Arvind Kejriwal "that violate the norms of decent democratic debate".

A statement issued by the guild said "accusation against the media as being bought by a particular political party and candidate and his threat, even if it be an empty one, to send media persons to prison after an enquiry reflect an intolerant mind-set that resents any critical scrutiny".

"It is the democratic right of the free media to raise any issue and to subject any public person or party to scrutiny, and it is ridiculous to label criticism of a party or of a political leader as 'paid news'."

It went on to say that "most parties have grown to take critical scrutiny for granted and have shown the maturity to counter and get their points of view across in a reasonable manner".

"One hopes the intolerance that is reflected in Arvind Kejriwal's recent attacks on the media does not represent the new style of politics promised by the Aam Aadmi Party and its leaders." - IANS