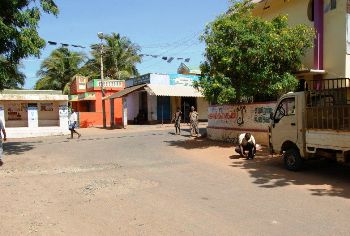 A two-member fact finding team that visited Kudankulam recently to investigate allegations of bomb attacks by supporters of Kudankulam Nuclear Power Plant (KKNPP) has come out with shocking revelations.

According to the report submitted by senior journalist Sam Rajappa and human rights activist Antony Samy, four persons on two motorbikes had hurled three country bombs in different places at Idinthakarai village on the night of 24 August.

The first explosion took place just outside the parish priest’s bungalow. Two more explosions followed in quick succession on the nearby road.

Though no one was injured, the report observed that “for the first time one could detect a sense of fear, particularly among women and children, in their long and determined struggle against the nuclear plant.”

According to the report, “Kapoor, a subcontractor of the Koodankulam plant, and his brother Socrates, sons of Siluvai Antony of the same village now residing at Parameswarapuram village after the family was excommunicated by the Idinthakarai community for their anti-people and criminal activities, and Lawrence, another brother of Kapoor, accompanied by Sandeep, were seen riding on two motorcycles and throwing the country bombs by not only Mrs. Mary Sebastian, but also Mrs. Amali Nasren and Lilly Pushpam, wife of Mr. Clement, who too were on their way to the church compound at that time of the night.”

The report further noted: “The three women who are eye-witnesses to the four men throwing country bombs approached the Koodankulam police station around midnight on 24 August itself with a written complaint but the sub-inspector on duty refused to register their complaint, pleading he needed instruction from his superiors.

“The women wanted to stay put in the police station till their complaint was registered, but they were not allowed.

“By 4 a.m., the same police station filed an FIR against 15 named, including SP Udayakumar and other leaders of the PMANE, and 35 unnamed persons, holding them responsible for the bomb explosions.

“Two van loads of police men were posted to guard the residence of Kapoor at Parameswarapuram, the real culprit of the bomb attacks, round-the-clock, making a mockery of the law and order situation in and around Koodankulam.”

The report said, “A new development in the coastal villages surrounding Koodankulam is the nexus between the Koodankulam nuclear power plant authorities, the district administration and the police, and VV Minerals of Vaikuntarajan.” – TWL Bureau

Sam Rajappa, one of the members of the fact finding team is Consulting Editor of The Weekend Leader - Editor