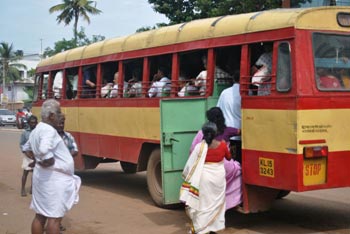 The words ‘public transport’ have taken on a new seriousness, ever since the gang rape of a student on a private bus in Delhi on December 16, 2012. But it is not just Delhi that has witnessed sexual assaults on women in public transport.

Take, for instance, Kerala. For decades no woman or girl here has ever considered a trip by bus or train safe. In fact, ‘groping’ is so commonplace that the stereotype of the ‘groper-in-the-bus’ is part of the comedian’s stock-in-trade in the state.

According to the State Crime Records Bureau, 3,756 molestation cases were registered in 2011.

In terms of “eve teasing”, there were 573 such incidents that year. Around 98 per cent of women respondents in the state capital, Thiruvananth- apuram, and 99 per cent in Kozhikode, saw sexual harassment as the main safety issue, according to a recent study conducted by Sakhi Women Resource Centre, a Thiruvananthapuram-based organisation.

It also found that 100 per cent women and young girls contacted had experienced sexual harassment, whether in a train or a bus in Kochi.

In private buses, which outnumber public buses in Kochi, the seats in front of the bus are reserved for women. But as the bus gets crowded men also stand near these spaces. Sexual harassers have a free run in precisely such situations, with some women even reporting blatant assaults like male hands making their way deep inside their garments.

There was also a lot of verbal harassment, especially after dark. Men pass lewd comments or take part in conversations conducted in ‘obscene coded language’, leaving the few women passengers present on the bus feeling extremely humiliated and vulnerable.

Even the crew on the bus cannot be expected to conduct themselves in a decent manner. It is very common to find conductors brushing against women while selling tickets. Female students, especially those who travel at concessional rates, are treated badly.

Not only do buses not stop to pick them up, once inside they are subjected to rude comments and are often not allowed to use a seat, or told that they can sit on the lap of a male passenger. Such treatment is routine, no matter what they wear or how they conduct themselves.

Many have been forced to adopt strategies like growing their nails or carrying pins and umbrellas, to stave off assaults. Their best option, of course, is to travel in buses meant only for women, but these are few and far between.

Disturbing testimonies of this kind led Sakhi to focus on improving the helplines instituted by the state in all its 14 districts. Helplines were seen as useful in getting help to the spot. The number 1091, the designated women’s helpline run by the Kerala Police, has emerged as a very important resource in many cities.

The problem was that very few women knew about the existence of such a facility. Sakhi, therefore, decided to find out how many cases came to the helpline, the nature of the cases, the response towards them, as well as the follow-up procedures and actions taken.

The goal was to arrive at an analysis of the efficacy of this approach, which would in turn help the administration to understand the pros and cons of such an intervention and to address the gaps.

The drive was conducted in Thrissur, where the state’s helpline was first introduced in 2005, and, thereafter, in Thiruvananthapuram, Kozhikode and Kasargode.

The primary feedback itself was that the helplines were hardly effective. In Thrissur, the 1091 toll free number works from BSNL mobile phones but it is impossible to connect from other phones.

Six women police constables and a male driver work in shifts, from 8 am to 6 pm and 6 pm to 8 am. No extra funds have been allotted for out-of-pocket expense and currently the officers themselves pool in money to meet their out-of-pocket expenses such as buying food or train/bus tickets for poor women who approach the helpline with their cases.

Although the Thrissur helpline gets an average of 30 calls per month - with the maximum number of them taking place after 10 pm - there have hardly been any women callers over the past one year.

Most calls came in from other helplines like police patrol vehicles, or the child helpline or police aid posts, especially at bus stands. None of the calls were recorded. The efficacy of the system was thus judged to be nil. The other three cities fared no better.

But since this study was conducted under the aegis of the state Home Department, police personnel at the very high echelons of the force suggested many improvements. For one, they stressed the need to publicise the helpline number a great deal more.

Second, they recommended that funds be made available to increase the use of computers and the internet for better communication. They also argued for more staff, with additional women sub-inspectors appointed in all police stations to handle such issues.

There was a need for new, closed vehicles - Sumo or Qualis – that would provide comfort and privacy to the women seeking help, they observed. Another imperative highlighted was the need for intensively training police personnel on handling these calls, a process that would necessarily include sessions on counselling.

Almost everyone consulted agreed that the helpline number should be toll free and have access to connections from all BSNL/VSNL and private land/mobile services, with another connection catering to follow up work. There was also a strong advocacy for in camera proceedings in courts and fast track courts to deal with these cases.

Sakhi members believe that the Kerala Protection of Privacy and Rights of Women Act 2012 that was recently enacted is a step in the right direction although they know well that laws are inadequate to curtail such incidents.

As Rosakutty, Chairperson, Kerala State Women’s Commission, observes, “These incidents are born out of a deep-rooted contempt and disrespect for women. No law can change this.”

Clearly, awareness campaigns and educational programmes have to be part of any intervention that seeks to transform public attitudes and end public apathy.

Rosakutty puts it this way, “Society, in general, needs to be more pro-active. We need to bolster the retaliatory spirit in our girls, so that they can defend themselves and their rights.” For that, she adds, they need to have a sound knowledge of their legal rights and be ensured of public support wherever they are.

Today, however, that is certainly not the case. Women are forced to bear all the humiliation and attack that come their way without speaking out for fear that assaulters will retaliate even more violently. Similarly, bystanders are mute because they know well that in the current climate of impunity, violence could be directed at them, if they interfere.

It is to end this culture of impunity that the campaign against sexual harassment in public transport is so important. Sakhi is one of the organisations that have taken up the challenge.

Through posters, stickers, street theatre and television talk shows, it aims to build the confidence of women subjected to sexual harassment so that they can defend themselves and seek justice, even while effective and timely messages are conveyed to the public on the critical importance of this issue.- Women's Feature Service