Woodpecker or mynah? Check out your bird-type on email

The study, unveiled Thursday, says increased use of email in business has also resulted in development of "idiosyncratic patterns of emailing behaviour that can either delight or enrage".

The popular categories include the "Compulsive Woodpecker", who can't resist reading emails at all hours of the day and night and the "Hibernating Poorwill", who reads emails occasionally so that senders can never rely on them.

The "Caterwauling Peacock" emails to all and sundry, claiming that people need to know what actually is grandstanding and the "Backcovering Emu" sends emails in order to be able to prove, at a later date, that information was passed on.

The "Echoing Mynah acknowledges all emails with "thanks", then "my pleasure" and "then thanks again".

The "Boorish Parrot" sends abusive or inappropriate emails and fails to understand why others get upset by them and the midnight emailer who fails to appreciate other's need for time out is the "Night Owl".

The "Robin" shows perfect email manners and does not allow emails to take over their lives.

Karen Renaud, senior lecturer in the School of Computing Science at the University of Glasgow, says though email has become a vital business communication tool, many people still have gripes about email.

"Some people find themselves checking emails all the time, even during evenings, weekends and holidays, others complain about how other people behave when using email. When we analysed all the findings we realised we could categorise email behaviour and match them to the characteristics of some well-known birds," Renaud said. - IANS 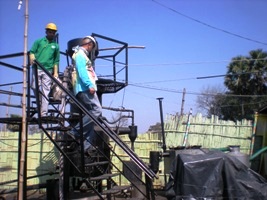 Indian professionals are returning home to start ventures that are run with a heart. James Jose profiles a few of them, figuring out what makes them tick as successful social entrepreneurs

The latest weapon employed by Dalits to beat age-old caste discrimination is capitalism, says Subhash Gatade, reporting on the modern Dalit aspiration to become job-givers and not job-seekers

Rafting in the Ganga, jumping from a cliff into the flowing river, scaling the mountains and rappelling – all this is happening in Rishikesh which is turning into a cool holiday destination

Clearing oil spills on sea will be easier when the nanosponge developed by scientists from Rice and Penn Universities hits the market. It absorbs 100 times its weight in oil and can be reused

On this World Sight Day, Elizabeth Kurian shares the stories of Daniel, Venkatesh and Maniki, who got their sight back thanks to the organizations working among the visually impaired