Chavez was caught between the two-track approach 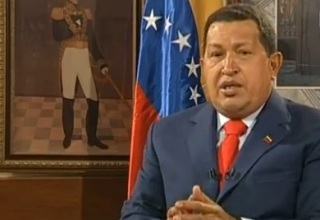 One of the greatest contributions Hugo Chavez Frias made to contemporary history was to activate participatory democracy.

His concept, what he called the Bolivarian Revolution, was to combine structures of the state and parallel communal councils, alongside the Bolivarian social missions that improve the lives of the great mass of Venezuelans.

A key issue for those desiring profound social transformations, or revolutions, is whether to collaborate with state institutions.

Commandant Hugo Chavez’ notion of “top down” and “bottom up” political structures was essential for his vision of creating 21st century socialism. That required left forces to rethink their understanding of socialism and revolution.

The party that he led, PSUV (United Socialist Party of Venezuela), created just five years ago, has seven million members, around half the number of Venezuelans 18 years and older.

The PSUV allows divergent tendencies, ranging from social democrats, nationalists, environmentalists, socialists, Trotskyite, and communists. Some anarchists also participate. This popular notion of democracy is something that the traditional Communist and Trotskyite parties have always rejected.

Half the state budget goes to social investment. The state also sells oil to friendly “third world” nations at well below market value. In addition, tens of millions of Latin Americans and even two million poor US residents receive free heating.

Cuba gets 100,000 barrels of oil daily (more than half its consumption) in exchange for tens of thousands of physicians-nurses, teachers, sports trainers, many types of skilled professionals, and military and intelligence advisors.

This is something that Henrique Capriles—the presidential campaign opponent to the transitional president, Vice President Nicolas Maduro—would stop.

In 2004, they launched ALBA (Bolivarian Alliance for the Peoples of Our America), which seeks social, political and economic integration.

Other member nations are: Antigua and Barbuda, Bolivia, Dominica, Ecuador, Nicaragua, Saint Vincent and Grenadines. Suriname and Saint Lucia are guest countries. Honduras’ President Manuel Zelaya joined in 2008. This was a key reason why the right-wing, led by generals loyal to the US, overthrew him in a coup and the illegal government withdrew from ALBA.

The progressive alliance has its own currency, the Sucre. Many projects for social welfare and national development are partially financed by Venezuelan oil. That places this nation as the most generous in the world with its natural resources.

The Bolivarian process began not as a socialist revolution, but as an anti-neo-liberal movement that became increasingly radicalized after the US-backed coup, in 2002, against the then rather social democratic nationalist Chavez.

His goal then became to inspire a gradual revolution not based on armed struggle, but to eventually overcome the bourgeois state by building a strong parallel communal council.

When the national bourgeoisie and its Western imperial allies propagandize that Chavez was a tyrant and dictator, they were projecting their own roles in history not his.

Chavez was, in fact, their opposite. He may have been a Don Quixote revolutionary but he was what the masses of poor people have long desired, and that makes him a true democrat.

During Chavez’ 14 year-long presidency, he conducted 15 national elections and referendums, winning all but one referendum.

In his fourth presidential election last year, he took 55% of the vote with many political parties in opposition. His party won 20 of 23 governorships.

A unique feature of Chavez’ character was to learn from the people, who guided him to become a great teacher. He drew so much from their overwhelming active opposition to the military coup against him that he could take the majority of people with him toward a humanitarian socialism.

No revolutionary process, violent or peaceful, is without contradictions. Building parallel power structures is wrought with them.

There are the risks of the budding people’s power entities being co-opted by the entrenched state bureaucracies; risks of paternalism; clashes between centralism and self-management. But there is great progress, including self-management in many job centers taken over by the workers.

Yet Chavez was caught in between the two-track approach. Born into a poor family, he understood the need for true democracy. Then rising in the ranks of the military and becoming the top state leader, he knew the necessity of performing as a diplomat. He felt forced to make unpleasant and even contradictory choices.

For instance, he came to challenge and even injure the Colombian guerrilla movement, FARC (Revolutionary Armed Forces of Colombia). He believed, in the end, that it could not gain victory and had to transform into a political force. FARC had tried that and it resulted in thousands of murdered members. FARC feels at risk again of being mowed down by the US-friendly government of Colombia.

Recently, Chavez had a number of Colombian guerrilla leaders, and a radical journalist with Swedish citizenship, arrested.

They were handed over to the right-wing regime of President Juan Manuel Santos. This act is against the new Venezuelan constitution that Chavez introduced, and opposes all notion of solidarity. It was an act of real politic.

Another moral error was in politically embracing the brutal, reactionary Sinhalese government of Sri Lanka, thus leaving his natural allies, the Tamil minority, to continue to suffer murder, torture, rape, discrimination by law: genocide. He, like Cuba and the rest of ALBA, felt compelled to play the geo-political game.

Another dilemma is whether the gradual, non-violent process to create socialism—a good and egalitarian life for all, which requires the elimination of the capitalist economic system—is formidable enough to win over the violent power embedded in capitalism and its imperialist arm.

Because Chavez was a great teacher, he was a real threat to the United States, leader of global capitalism and imperialism. Several top US politicians and evangelical preachers called for his assassination.

Venezuela’s government is investigating the possibility that US agents infiltrated his body with a cancer virus, something the terrorist state has done on numerous occasions.

Conducting a successful peaceful revolution that replaces the dominant economy and its empire is dubious. Nevertheless, I sincerely hope that Chavez’ approach will prevail. If not, then the only alternative will become crystal clear to the working and poor peoples.

I paraphrase what Andre Vltchek wrote upon the death of this man of the people. When we lose an indispensable person, nothing may change on the surface: we are still walking, eating, sleeping, working, even fighting. It is the gaping hole, though, that dominates our hearts and souls.