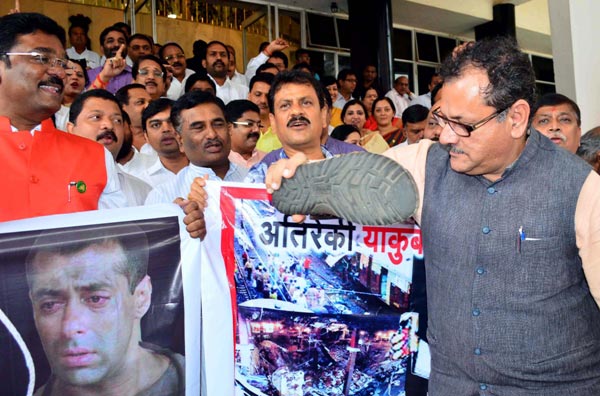 The hanging to death of Yakub Abdul Razak Memon, the lone death row convict in the 12 March 1993 Mumbai serial blasts case, on 30 July morning, holds a mirror to Indian democracy, political parties, and the justice system.

Death sentence of the 10 terrorists who planted the explosives was commuted to life imprisonment. The man who helped our intelligence agencies to unravel the involvement of Pakistan and its ISI, whose involvement in the crime at the most is peripheral, was sent to the gallows.


The bomb blasts were a heinous terrorist attack in which 257 people were killed and more than 700 maimed. Its perpetrators deserve the highest punishment available in the statute books.

The crime and the punishment meted out should be understood in its historical context. On 6 December 1992, the ancient Babri Masjid in Ayodhya was demolished, an act of terrorism sans explosives.

The ‘victory’ rallies held by the BJP and the Shiv Sena on the streets of Mumbai metamorphosed into full-fledged anti-Muslim riots and the mob-terror lasted till January 1993, taking a heavy toll of more than 1,000 lives.

The Maharashtra government led by Sudhakarrao Naik of the Congress and the city police did precious little to contain the riots.

One of the terms of reference of the Srikrishna Commission appointed by the government to inquire into the riots of December-January was to explore whether the 12 March serial blasts had anything to do with the riots.

The Commission’s report says: “Tiger Memon, the key figure in the serial bomb blasts case, and his family, had suffered extensively during the riots and therefore can be said to have had deep rooted motive for revenge…

“There was a large amorphous body of angry, frustrated and desperate Muslims keen to seek revenge for the perceived injustice done to and atrocities perpetrated on them or to other members of their community and it is this sense of revenge which spawned the conspiracy of the serial blasts.”

Claiming there was a common link between the riots and bomb blasts, Justice Srikrishna concluded, “the former appears to have been a causative factor of the latter.”

This official document confirms that Tiger Memon was the key figure in the serial bomb blasts case and not his brother Yakub, a successful Mumbai businessman.

Bur Tiger Memon is safely ensconced in Karachi under the watchful eyes of the ISI and protective arms of the Pakistani authorities. Since he is beyond the reach of the Indian law-enforcement authorities, Yakub Memon was made the fall guy and prosecuted as the key conspirator and sentenced to death by a TADA court.

TADA itself has been withdrawn in 1995 but its ill effects on the freedom of citizens live on. Other than unwittingly funding the dastardly act of his brother Tiger Memon, kingpin of the conspiracy, and arranging a car out of brotherly bond that was used to plant the bombs, Yakub’s only crime was that of association with the guilty.

He maintained all along that he had no foreknowledge of the conspiracy or any involvement in the bomb blasts. He fully cooperated with the multiple investigating agencies and provided vital information about the involvement of the ISI.

The prosecution claim of arresting him from the New Delhi railway station was found to be false. In reality, he was detained in Kathmandu on 28 July 1994, flown to Delhi in a government aircraft on 5 August and dropped in the railway station to be picked up by the police.

The police took full credit for this prized ‘catch,’ whereas Yakub returned on his own volition to make a clean breast of the extent of his actual involvement.

The belated disclosure of B Raman, deputy chief of RAW who organised the return of all but two members of the Memon family to India, reveals that there was an understanding that Yakub will be given a fair treatment.

In this entire sordid episode, Yakub filed only one mercy petition, on 29 July, which was dismissed by President Mukherjee the same night on the advice of Home Minister Rajnath Singh.

A mercy petition filed by Suleiman Memon to spare his brother’s life in 2014 was also rejected by the President. That did not prevent Yakub from filing his own mercy petition and challenge its dismissal in the Supreme Court.

His final plea was a mere 14 days’ time before he was sent to the gallows, which he was entitled to under the Maharashtra jail manual, so that he could “make his peace with God and settle his earthly affairs before leaving this world.”

This plea was put up before the hurriedly assembled Bench comprising Justices Deepak Misra, Prafulla C Pant and Amitava Roy which, earlier in the day, dismissed his petition. Like in review petitions going before the same Bench getting the same result, Justice Misra and team did the obvious. A new Bench would have brought fresh thinking.

The BJP government of Maharashtra had obtained Yakub’s death warrant on 30 April itself and scheduled his execution for 30 July, 53rd birth day of the condemned prisoner. That the death warrant was obtained in undue haste is self-evident.

The procedure to obtain a death warrant is laid out in the Code of Criminal Procedure in Form No 42 which states the name of the person to be executed, the offence for which he was sentenced and the time, date, and place of execution should be spelt out.

The proceedings should take place only after the prisoner has exhausted all legal remedies. The Maharashtra government did not even give notice of the death warrant proceedings to Yakub or his lawyers.

The State should have cancelled the 30 April death warrant on coming to know that Yakub’s curative petition was pending in the Supreme Court.

The Justice Misra Bench of the Supreme Court created history by holding a special hearing beginning 3.17 am on the night of 29 July. Without waiting for its verdict, which was pronounced at 4.50 am, in distant Nagpur, jailors woke up Yakub at 4 am to prepare him for the gallows.

As if on cue, the Bench dismissed Yakub’s plea saying he had enjoyed ample opportunities before the apex court and that any concession to him in the last minute would be a “travesty of justice.”

Repeated filing of mercy petitions frustrates the principle of finality, said Arun Jaitley, Union Finance Minister. Yakub had filed only one mercy petition. His brother, Suleiman, had filed a mercy plea last year which was rejected by President Mukherjee in May 2014. That does not take away the right of Yakub to file a mercy petition of his own.

While not a single person has been has been convicted or executed for the two causative crimes, there was a hue and cry for the blood of Yakub. It had the appearance of a justice that was retributive and vengeful.

The quality of mercy would not have been strained if President Mukherjee, exercising his powers under Article 72 of the Constitution, pardoned Yakub and set him free.

That would have been a fitting tribute to the humane legacy of former President APJ Abdul Kalam, whose mortal remains were laid to rest in Rameswaram on the day of Yakub’s hanging in Nagpur.