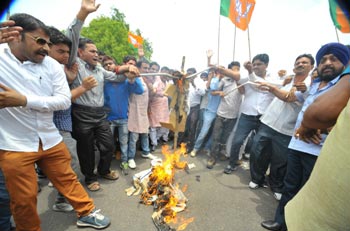 The experience of the Emergency - 19 months of undemocratic rule in India, without civil liberties - is now a distant memory. For the young, it is a paragraph in history books. Those who do not remember history, it has been said, are condemned to repeat it.

The trauma of June 26, 1975, followed months of economic discontent, and political turmoil. Two bad agricultural years, and the phenomenal rise in world oil prices after OPEC was formed, sent inflation in India up to an unprecedented 15 percent in 1974.

Rising prices in food and essential commodities meant distress for rural and urban labour and hardship for fixed income families. To counter inflation, the government stopped all new construction works, froze wages and salaries in the public sector, and imposed compulsory savings on income tax payers.

These measures, though they brought prices down in a few months, were highly unpopular. A countrywide strike of railway workers was put down with some severity.

The political opposition, earlier impotent against prime minister Indira Gandhi's popularity and large majority in parliament, seized on this opportunity to mobilize public support against the government, whom they charged with pervasive corruption.

The working of parliament was disrupted with frequent rallies in Delhi demanding its dissolution and fresh elections. In Gujarat, the Nav Nirman movement against the then Congress (I) government led to sporadic violence.

Then Jayaprakash Narayan, or JP as he was called, the former socialist leader who had quit politics for Gandhian social work, came out of retirement, calling on students and youth to join him in a peaceful revolution for the moral regeneration of politics.

JP's political aims were unclear, beyond removing Indira Gandhi from power. His movement evoked great enthusiasm in Bihar and Uttar Pradesh, and then spread to other states in the north and west.

At this critical juncture, on June 12, 1975, an order of the Allahabad High Court on an election petition unseated Indira Gandhi and barred her from elections for six years. The Supreme Court stayed the order, pending appeal, allowing her to continue as PM but without voting powers.

Tension mounted in Delhi with daily rallies outside the PM's house and counter-demonstrations by her supporters led by her son, Sanjay Gandhi. At a major rally in Ramlila Grounds, JP called on the army and police to disregard orders to suppress demonstrations.

Indira Gandhi could have stepped down as PM in favour of another Congress leader, who could later dissolve parliament. The High Court order, based on technical infringement of electoral law, would very likely have been overturned by the Supreme Court. She would almost certainly have won another election with ease.

But the PM saw herself as the victim of a right-wing conspiracy; she would not risk even a temporary loss of power. Her advisers on the extreme left even told her that her life might be in danger, like those of Salvador Allende in Chile and Sheikh Mujibur Rahman in Bangladesh.

A way out for the beleaguered prime minister was found by the then West Bengal chief minister Siddhartha Shankar Ray, an eminent lawyer. This was to misuse a constitutional provision meant for dealing with armed insurgencies.

After two or three days of secret preparation, with the help of a few trusted officials, an ordinance proclaiming a National Emergency was taken by Indira Gandhi to President Fakhruddin Ali Ahmed for approval, late on the night of June 25.

It was issued early on the morning of the June 26. The cabinet knew nothing till it was convened later, and then dutifully approved of the ordinance.

In dawn raids, leaders and activists of all political formations in the opposition, from the RSS and Jan Sangh to Socialists, Congress (O), JP and his supporters - in all 60,000 people all over India - were taken in for preventive detention. Newspapers were shut down on the 26th and 27th. All India Radio had no reports beyond the promulgation of the ordinance. There was panic in the country.

In the course of the Emergency, more than 100,000 people were imprisoned without trial. Access to the courts was denied to detainees, the government arguing that all fundamental rights had been suspended during the Emergency, and even the writ of habeas corpus was not available to detenus'.

Three High Courts disagreed with the government. But on appeal, a Supreme Court Bench, with some of India's leading jurists, upheld the government view. Only Justice H.R. Khanna dissented.

Pre-censorship was imposed on all newspapers and journals. Owners and editors were intimidated; only the Statesman and the Indian Express continued to voice some dissent. The BBC office was closed and Mark Tully expelled.

Kuldip Nayar was in jail for some months. Romesh Thapar, earlier close to Indira Gandhi, suspended his publication of Seminar journal as a protest against censorship. Public opinion in the Western democracies was critical of Emergency rule in India. Only the British Labour Party gave some support to Indira Gandhi.

One's most lasting memory of those days is of the fear that gripped the entire middle class, of arrest and detention, if any dissent was voiced in public. Politicians made no protests in or out of legislatures. Ordinary people would not talk freely, except among close friends. One understood what it had been like living under dictatorships in Europe.

On the morning of June 27, when the public was still in the dark, the prime minister spoke to secretaries assembled in South Block. She said her actions had been necessary because of a grave threat to the government, mentioning JP's Ramlila Ground speech. She said she had no intention of changing the existing governmental system, and called for the civil service to make governance more effective.

In a few days, in an effort to make the Emergency popular, a 20-point programme of social reform was hastily put together: it ranged from the abolition of bonded labour to free exercise books in schools.

This was then incorporated in the Five Year Plan. Sanjay Gandhi wanted to give priority to two elements: renewed emphasis on population control and urban slum clearance. These were then implemented in ways that they became 'excesses' of the Emergency.

Early in the Emergency, it was clear that cabinet ministers now exercised only nominal authority and that too in routine matters. All important decisions were taken by the PM herself, with Sanjay as her chief adviser, and a small group of junior ministers executed these orders. Some positions in key ministries could be filled only after interviews with Sanjay.

Some civil servants were prepared to praise the Emergency, accept the new dispensation and further their careers. The vast majority simply kept their own counsel and continued to work as usual. A few known critics were moved out of positions of authority. No one resigned.

The constitutional five-year life of parliament was twice extended by emergency legislation, to avoid new elections. This gave time to Sanjay Gandhi to extend his influence through younger leaders in the state Congress parties.

This group revived an old idea of replacing India's parliamentary democracy with an executive presidency, and pressed for convening a new Constituent Assembly. At the end of 1976 it seemed that India's liberal democracy would never revive.

Then in mid-January 1977 came the wholly unexpected announcement that Indira Gandhi - whether impelled by a desire to regain her democratic legitimacy, or misled by intelligence reports of her continuing popularity - had decided to dissolve parliament and hold new elections.

Political leaders and party workers were released and allowed to campaign freely. Press censorship was relaxed. In the elections of mid-March 1977, the country gave its verdict on the Emergency. Congress (I) lost across India to the Janata Party formed by united opposition leaders after their release.

Bobby Deol: It's a challenging time to be an actor

Sushant Case: Who is Shruti Modi?