All eyes on Sirisena, as he takes the hot seat 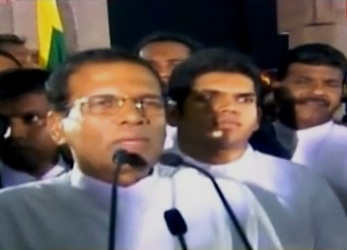 The result of the 8 January presidential election in Sri Lanka signifies revival of democracy in the troubled island nation. Former President Mahinda Rajapaksa’s second term in office was scheduled to end only in January 2016.

He thought of winning fraudulently a third term by introducing the 18th Amendment to the Constitution which removed the two-term limit on the office of President and armed himself with sky high powers to stay in power indefinitely and advanced the election by two years.

The people of Sri Lanka willed otherwise. The contest was, in Rajapaksa’s own words, between a known devil and an unknown angel. His human rights record is such that Lord Venkateswara of Tirupathi, whose blessings he invoked with a hefty offering in its hundi, declined to intervene. Neither did the tantric Vajra Yantra in his grasp believed to help vanquish rivals nor Salman Khan’s presence at his campaign brought him his coveted third term.

Maithripala Sirisena, the common candidate of the Opposition who was elected as the 6th Executive President of Sri Lanka, is not exactly an unknown angel. He is as much a Sinhala Buddhist supremacist as Rajapaksa and was the acting Defence Minister during the crucial final days of the Fourth Eelam War in which the entire leadership of the LTTE, including Velupillai Pirapaharan, and between 40,000 and 70,000 innocent Tamil civilians were butchered.

He was a close associate and cabinet colleague of Rajapaksa in the last 10 years and willingly participated in all excesses of the outgoing regime. Ending the 26-year-long civil war and decimation of the LTTE dominated the election campaigns of both Rajapaksa and Sirisena in the Sinhala areas.

In a bid to take credit for his share of war crimes, Sirisena said at the hustings, “I was a person who was targeted by the LTTE on more than five occasions. The LTTE cadres who tried to kill me destroyed themselves without causing me any harm…I have acted as the Minister of Defence five times during the height of the war. I will not permit the resurgence of the LTTE. We will build the country with all our hearts and minds.”

What tilted the balance in favour of Sirisena was the 740,251 votes lead he received in the Tamil and Muslim majority constituencies in the Northern and the Eastern Provinces.

The dissatisfaction of the Tamils against the Rajapaksa regime is well known. But the Sri Lanka Muslim Congress, the largest Muslim political party in the country, was a constituent of Rajapaksa’s ruling United People’s Freedom Alliance. Rauf Hakeem, leader of the SLMC and Minister of Justice, resigned from the government on 28 December and pledged his party’s support to Sirisena.

Having subdued and subjugated the Tamils, the Rajapaksa regime unleashed a reign of terror against the Muslims and the Christians in an attempt to turn Sri Lanka into a Sinhala Buddhist State.

Three UN experts on freedom of religion, minority issues and summary executions, in a press conference in Colombo on 2 July 2014, urged Rajapaksa to adopt urgent measures to stop promotion of racial and faith-based hatred and violence against the minorities. It fell on deaf ears. According to the UN experts, more than 350 violent attacks against Muslims and 150 against Christians had taken place in the preceding 12 months.

The choice for the Tamils in the presidential election was between tweedledum and tweedledee. Rajapaksa was able to strike a deal with the LTTE in 2005 to keep the Tamils indoors to prevent them from exercising their ballot and got elected President for the first time with a slender margin mainly on the votes of the Sinhalese who constitute 70 per cent of the population.

He had a cakewalk in 2010 in the aftermath of vanquishing the invincible LTTE. He planned to keep the Tamils indoors again by resorting to terror tactics this time. At the dawn of polling day, 8 January, bombs exploded in the Northern Province towns of Point Pedro and Vavuniya to frighten the people from coming out to vote.

SY Quraishi, former Chief Election Commissioner of India who was deputed to monitor the election in the Northern Province, said “the blasts provoked the people to come out and vote in large numbers. They took the intimidation as a challenge.” Calling for an independent Election Commission with adequate powers, Quraishi pointed out the Sri Lankan Election Commission was a department of the government.

For Rajapaksa, 8-9 January 2015 turned out to be Indira Gandhi’s June 1975 moment. As counting progressed through the night and the difference in votes between the two candidates got wider and wider, Rajapaksa wanted to declare an Emergency and annul the election result.

He summoned the Attorney-General and asked him to prepare the declaration. Meanwhile, he called the Chief of the Army Staff, Lt-Gen Daya Ratnayake, to deploy troops in the middle of the night. Ratnayake realised the former Army chief Sarath Fonseka and hero of the Eelam war victory was on the side of Sirisena and it would be risky to commit troops to save Rajapaksa’s political future. Both declined to do anything illegal.

Finding no scope for any jiggery-pokery or skullduggery, Rajapaksa decided to play the gentleman statesman. Conceding defeat even before the result was declared officially, he invited Opposition leader Ranil Wickremesinghe, handed over power, and vacated Temple Trees, his official residence, before daybreak on 9 January.

President-elect Sirisena did not want to be sworn in by Chief Justice Mohan Peiris, appointed by Rajapaksa by locking the doors of the Supreme Court to prevent the de jure Chief Justice Shirani Bandaranaike from entering the court premises.

Bandaranaike still claims to be the 43rd Chief Justice of Sri Lanka. Justice K Sri Pawan, senior-most Judge of the Supreme Court, administered the oath of office as President to Sirisena and United National Party leader Wickremesinghe was sworn in as the Prime Minister. The coming together of the UNP, Sri Lanka’s oldest political party, and Sirisena’s Sri Lanka Freedom Party on a common platform augurs well for the island nation.

With the exit of Rajapaksa from the seat of power, one can expect the rabid anti-India hysteria in Sri Lanka to abate. Foreign policy is not the forte of the new President. However, there is no dearth of foreign policy experts in his team.

Demonstrations by chauvinist Sinhala fringe elements in front of the Indian High Commission shouting slogans against Prime Minister Narendra Modi and Tamil Nadu Chief Minister Jayalalithaa have disappeared for the time being. Modi was the first foreign head of government to congratulate Sirisena on his impressive election victory and invite him to visit India which the latter accepted with alacrity.

The distinct pro-China and pro-Pakistan tilt of the Rajapaksa regime is likely to be replaced by a pro-USA/Western tilt. But what matters most to India for peaceful coexistence is how Sirisena treats the minorities, particularly the Tamils of Sri Lanka.

The presence of Marxist-oriented Janatha Vimukti Perumana and Jathika Hela Urumaya, an ultra-nationalist Sinhala Buddhist outfit, among the supporters of the common candidate of the opposition parties, is bound to cramp the style of Sirisina in dealing with the Tamil problem.

Tamils in Sri Lanka have been subjected to military suppression ever since 1961. The LTTE was born as a response and reaction to resist military oppression. Even five and a half years after the brutal annihilation of the LTTE, the traditional homeland of the Tamils in the Northern and the Eastern Provinces continue to be occupied by the exclusive Sinhala military.

While the five preceding Executive Presidents were elected to the high office on Sinhala majority votes, Sirisena is the first President to be elected on the strength of the votes of all ethnic groups. In a democracy, all groups of equal. How he responds to this mandate will be watched closely by New Delhi and the rest of the world.