A Capital folly in the making 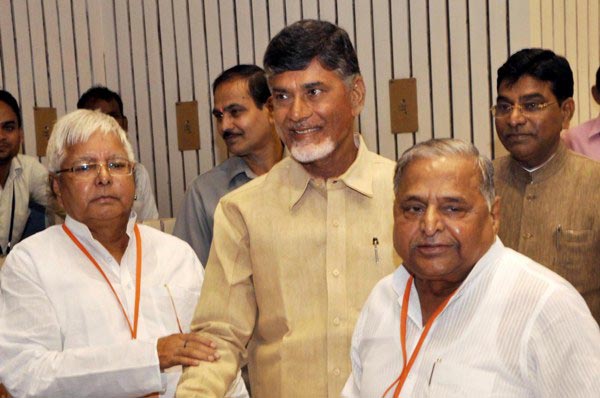 Chandrababu Naidu, Chief Minister of Andhra Pradesh, is obsessed with the idea of building a “world class city” as capital of the bifurcated state and has chosen the Vijayawada-Guntur-Tenali-Mangalagiri belt, generally known as the VGTM area, to locate it.

Chandrababu proposes to acquire 52,000 to 100,000 acres of this prime agricultural land for his dream city. Without waiting for the Centre to grant special status for Andhra Pradesh, he has decided to go ahead with the AP Capital Region Development Bill in the winter session of the Assembly beginning on 18 December.

Under this legislation, the Authority can acquire any movable or unmovable property by purchase, exchange, gift, lease, mortgage, negotiated settlement or by any other means permissible by law. The villages marked for the capital region have a vibrant agricultural economy of Rs. 1,000 crore a year with complete linkages from farm to market and large sections of people – land owners, share-croppers, tenant farmers, agricultural workers – deriving livelihoods.

While there is no rationale for acquiring such huge area of most diverse and prosperous agriculture land, it has unleashed a very disturbing game of real estate speculation and land sale deeds.

Singapore has been chosen as model for the new capital of Andhra Pradesh rich in agriculture. A Memorandum of Understanding has already been signed with the Singapore government for planning and development of the capital region with the approval of the External Affairs Ministry. And Japanese firms have agreed to partner construction of the mega city.

Chandrababu has asked for one lakh crore rupees from the Centre for the project. Singapore is a vertical city. The water table in the VGTM area is generally high. The Geological Survey of India has carried out a seismic micro-zonation in this area and has highlighted the problems of vulnerable soil types which may lead to severe problems of foundations and soil bearing capacities. This explains why there is hardly any high rise building in this area.

Everyone in the VGTM area is talking about land-pooling but none has any clear idea about the terms on which land will be acquired and what benefits will accrue. Ruling Telugu Desam leaders have been telling the farmers that land-pooling plan is final. If any farmer does not agree to pooling, his land will either be acquired compulsorily or declared as ‘green belt’ after which he will not be able to develop the land or sell it.

There has been a sudden boom in land price. Last month alone witnessed 3,500 acres of land in the region changing hands. There is no legal basis for land-pooling so far. The Land Acquisition Act, 2013, is the only law available to the government. This Act can be used only for public purpose. Commercial land development or city development is not considered public purpose. Even for public purpose, acquisition of irrigated, multi-crop land is prohibited except under exceptional circumstances where there is no alternative.

A fact-finding committee on the AP capital issue set up by the National Alliance of People’s Movements and headed by MG Devasahayam, former Administrator-cum-Estate Officer of Chandigarh Capital Project, after an extensive tour of the VGTM area and interacting with the affected people, found the AP government has not even done the most basic requirement of preparing a feasibility report.

He said that experience of Chandigarh showed that it took 60 years for the population to touch a million. Farmers who are being enticed with 1,000 square yard plots of developed land should realise that the development of urban area and growth in population will take decades and the land rates being projected by the government for the developed plots at several crore is unlikely to be realised.

He pointed out that Chandigarh, the most acclaimed capital area, was built on just 9,000 acres of land in Phase I and 6,000 acres were added in Phase II and took more than 50 years for implementation.

With nearby cities of Vijayawada having an extent of 15,500 acres and Guntur having 13,000 acres, there is no reason for the new capital area of AP to have more than 2,000 acres, said Devasayaham. He urged the government to proceed in a manner that serves the interests of the local people, including residents who are not land owners, and not the real estate mafia and big business.

The Expert Committee appointed by the Union Home Ministry to study alternatives for a new capital for AP under the chairmanship of KC Sivaramakrishnan was not at all in favour of locating it in the VGTM area on the sole principle of its geographical centrality.

Tamil Nadu, Kerala, Maharashtra and West Bengal have their capitals in one end of the states and are none the worse for it. When the State of Andhra was carved out of the erstwhile Madras Province first in 1953, Kurnool in the Rayalaseema region was chosen as capital based on a pre-Independence Sri Bagh agreement of 1937 between the leaders of the three regions of the state keeping in mind the need to balance political power and development across the regions. The High Court was to be located in Guntur and Andhra University in Visakhapatnam.

The Sivaramakrishnan committee is not in favour of a green field capital city for Andhra Pradesh at this stage. Reiterating that it is the AP government’s responsibility to decide on where to locate its capital, the committee said if the Chandrababu wants to pursue the green field option, it must carry out a careful search for locations where suitably large parcels of government land was available.

In regard to expanding existing cities, before taking up any work, a proper assessment of infrastructure needs and possible environmental impact should be carried out. In regard to the Chief Minister’s office and the secretariat, given the critical urgency of the matter, the committee recommended for considerations one of the sites in Nuzvidu, Gannavaram or Musunuru.

An IT park is lying unoccupied at Gannavaram. It could be considered as a temporary measure to locate the CM’s office and secretariat. Only those departments which are crucial to carry on the urgent tasks of the government in the interim should be located there.

Much of Andhra Pradesh is hot and humid, more so the VGTM region. Ad hoc and hurried location of government offices may prove to be inappropriate and wasteful. Different parts of AP are endowed with different types of natural resources whose development is essential.

In keeping with the objective of decentralised development of the state, the committee has identified three regions where capital functions and other institutions can be distributed. They are the Vizag region, Rayalaseema arc and the Kalahasti-Nadikudi spine.

The committee recommended that various government offices dealing with industry, manufacture, ports, shipping, IT and petrochemicals may be located in the Vizag region. The High Court could also be located in Vizag which has the Damadoram Sanjivayya National Law School in the same pattern as other national law school universities.

The legal fraternity practices in all these bodies and frequently appears in the High Court as well. In the Rayalaseema arc stretching from Kurnool to Chittoor via Anantapur and Tirupathi, including Kadapa, the committee suggested the location of various capital functions and institutions.

The government should decide as soon as possible the locations of the different directorates and other offices so that they can make a beginning to shift to these locations in these growth zones as well as districts as appropriate. Hyderabad, the temporary capital, is 200 km from the closest border of Andhra. This is administratively untenable in the medium term.