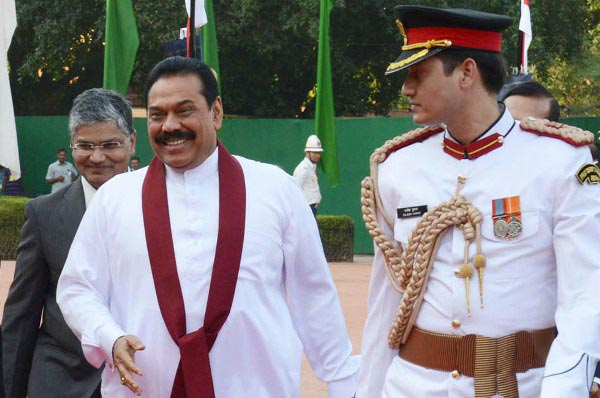 The two main political parties in Sri Lanka, the United National Party and a section of the Sri Lanka Freedom Party, have come together for the first time in the history of Sri Lanka to challenge the family rule of President Mahinda Rajapaksa who is seeking a third term against the constitutional limitation of two terms by amending the Constitution for the 18th time and obtaining a favourable ruling by the Supreme Court Chief Justice Mohan Pieris.

Under Article 129 of the Sri Lankan Constitution, an issue referred to the Supreme Court by the President must be one of public importance. In the present case the reference related to the eligibility of the incumbent President to seek a third term. It concerns him alone and there was no public importance involved.

The court should not have given any opinion on a matter affecting his personal affairs. Besides, an opinion given without a hearing has no legal validity. Nevertheless, Rajapaksa has entered the electoral fray for a third term as President for which polling is scheduled for 8 January.

He is of the opinion that having been a two time victor at presidential election and having garnered the popular support of the people as a political leader at successive elections, such mandate holder should not be fettered with the sanction of a bar for a third time in accordance with the vision of that time of adopting the 1978 Constitution.

The imposition of such a disqualification is anathema to popular sovereignty as the 18th Amendment holds. Mohan Pieris, brought in through the back door as Chief Justice by Rajapaksa, gave the opinion his mentor desired and the restraint came unmoored. All this was entirely predictable and widely anticipated.

Leading lights of the SLFP which is heading the ruling United People’s Freedom Alliance, including general secretary Maithiripala Sirisena, who was also holding the post of Minister of Health in the Rajapaksa Cabinet, demurred.

Guided by patriotism, he offered himself as an alternative candidate for the office of President at great risk to his life with the promise of abolishing executive presidency in 100 days, if elected. Rajapaksa won his first and second term on the promise of abolishing executive presidency introduced by JR Jayawardane of the UNP in 1978. Both times he reneged.

Each President in the last 36 years had proved to be worse than the previous one in all walks of governance. The UNP accepted Sirisena as the common candidate of all forces of freedom and democracy determined to save the nation from the forces of nepotism and family dictatorship, on the clear understanding the Opposition leader and the UNP’s presidential candidate, Ranil Wickremesinghe, would become the Prime Minister.

In this unprecedented election, the UNP and the SLFP are giving the voter a single choice for the office President and Prime Minister while the SLFP rump is flogging Rajapaksa for yet another term. The rallying slogan of opposition platform is abolition of the executive presidential system and restoring parliamentary system of democracy which had been in vogue till 1978. In the event of the opposition scheme succeeding, Sirisena, after abolition of executive presidency as promised, could be accommodated as non-executive President like in India.

The strategy adopted by patriotic people to overthrow the Rajapaksa regime was to divide the government and unify the opposition. Smaller parties have already accepted the scheme. Srisena is fully aware of the risks involved in challenging all-powerful Rajapaksa. He has shown remarkable bravery and courage.

Rajapaksa has made a veiled threat of blackmailing his ministerial colleagues planning to cross over by saying he is having ‘files’ on them. Mahinda Ratnawera, Disaster Management Minister, by asking people why they should vote for Rajapaksa and the UPFA back to power, said in all seriousness that the existing ministers have “plundered enough” and the advent of a new government would mean another clutch of ministers who would start plundering all over again, has turned out to be a disastrous ally of the President.

With such buffoonery, Rajapaksa does not need any enemies to challenge him. The coming election is the last chance to stem the rot Sri Lanka finds itself in. Having won the 35-year-long civil war against the formidable LTTE, Rajapaksa became the darling of the Sinhala masses who constitute roughly three-fourths of the population in Sri Lanka.

He has been smug in the belief that as long as he had the support of the Sinhalese, no forces in the country could unseat him. Sirisena is as much a Sinhala supremacist as Rajapaksa but he lacks the latter’s dictatorial tendencies and inclination to put family first before the country.

He is a democrat by instinct and has a clean record of administration, notwithstanding Ratnawera’s claim the UPFA ministers have plundered enough. Moreover, Sirisena has a record of not losing a single election in his long political career. A staunch SLFP loyalist, Sirisena has the full support and backing of Chandrika Bandaranaike Kumaratunga, former President and daughter of the SLFP founder-leader SWRD Bandaranaike.
The marginalised communities in Sri Lanka like the Tamils, Hindus, Muslims and Christians, constituting about 25 per cent of the population, had lost all protection when the 1948 Soulbury Constitution was replaced by the 1972 Constitution.

At that time itself a study prepared for the Minority Rights Group by Walter Schwarz warned prophetically, “If Sri Lanka is not to experience communal violence or terrorism, there will have to be more readiness for compromise and modernisation than has yet been shown. It would be a pity if Sri Lanka leadership waited for bombs to explode and for the prisons to fill up again before conceding that the Tamils need reassurance that they have a place in the future of the Island.”

The 1978 Constitution is only a continuation of this trend. Rajapaksa has made it crystal clear that Sri Lanka is the land of Sinhala Buddhists and that the minorities could coexist peacefully only as second class citizens. The Eelam Tamils, single largest minority group, have always looked up to New Delhi for guidance and succour.

CV Wigneswaran, Chief Minister of the Tamil-majority Northern Province, said the Rajapaksa regime had played a game of “deceit” with New Delhi. This was largely due to the readiness of the UPA government to be deceived by Colombo. There was great expectation in the Tamil homeland in Sri Lanka comprising the Northern and the Eastern Provinces when Narendra Modi became India’s Prime Minister. But the old order continues mainly because Modi has not yet applied his mind to Sri Lanka issues.

Although Rajapaksa won his first term as President with the indirect support of the Eelam Tamils, they are in no mood to repeat their mistake this time. It was to soften their attitude that Rajapaksa enacted the drama of ‘pardoning’ and sending back five fishermen from Tamil Nadu sentenced to death by a kangaroo court for alleged smuggling of narcotics.

It was Rajapaksa’s diplomatic coup and not India’s as claimed by the media here because he succeeded in prevailing on New Delhi to withdraw the fishermen’s appeal in the High Court which would have quashed their conviction because the prosecution lacked evidence whereas defence lawyers had concrete evidence gathered from GPS data that the fishermen’s boat was nowhere near Delft Island at the time of seizure as claimed by Colombo.

Now the innocent fishermen carry the taint of pardoned convicts. His next ‘goodwill’ gesture to woo Tamil voters is to release the 85 Tamil Nadu fishing trawlers illegally seized by the Sri Lankan Navy in the last four months. Rajapaksa claimed that he released the fishermen because of the non-formulated “foreign policy adopted by Narendra Modi.”

The time has come for the BJP government to insist the new Sri Lankan regime adopt a quasi-federal Constitution like India and devolve power to the provincial governments. India owes this minimal responsibility to the Eelam Tamils.