A new challenging motorsport in rain 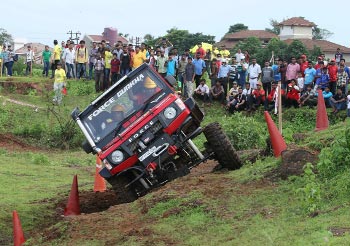 Formula 1 racing has a huge television audience in India, dwarfing other forms of motorsports which hardly get a look-in unless sponsored.

In India, motorsports is confined to a small band of enthusiasts and its niche bracket of Formula racing on purpose-built tarmac circuits and rallying on muddy gravel roads.

The latest addition to the country's motorsports events is the Force Gurkha Rainforest Challenge (RFC), the inaugural event held in the hinterland of Goa from Aug 9-14.

The RFC is an off-road experience for 4X4 vehicle drivers. They drive through forests where the drivers have to fight monsoon rains, manoeuvre through changing paths, mud, steep slippery slopes, deep ruts, gullies, flooded rivers and landslides on their modified 4X4 All-Terrain Vehicles (ATV).

The lashing rains alter paths and the competitors also have to deal with unpredictable erosion, fallen trees and other unimaginable hurdles. It is a test of a driver's mental and physical skills, understanding with the navigating co-driver and motor skills.

Started by Luis J.A. Wee in his native Malaysia way back in 1997, it has caught on in Italy, Russia, Sri Lanka, Vietnam, Tunisia, China and Australia. The six-day event was brought to India by Cougar Motorsport and its founder and director Ashish Gupta, who took upon himself a monumental challenge.

From planning the event, working out the economics, logistics, getting the permits leading to an excellent show, Gupta worked it all from scratch.

The competition is divided into several Special Stages (SS), 25 in the case of the India edition, where the drivers have to conquer everything that is in their path. Points are awarded on how well and fast the SS are completed and points are deducted for violation of rules. Eventually, the competitor with the most number of points wins.

But there are certain challenges which the organisers have to face, the most important one being the environmental issues. As the competition is held in the natural habitat of forests, the RFC tends to disrupt, destroy or wither trees, boulders, rivulets and the like.

Though an environmental charter was instituted before the event with stringent guidelines to safeguard the flora and fauna, it is impossible to do the SS without hurting the nature in some form or the other.

Another big challenge comes in the form of economics. To start with, motor racing is not a poor man's sport. In RFC, the competitors need to own 4X4 vehicles which don't come cheap. The entry fee for Indian contestants isn't inexpensive either at Rs.75,000 and $2,500 for foreigners.

Then comes the modification of vehicles to suit the terrain. Those monstrous tyres, heavy suspensions, racing axles and shockers are quite expensive.

Maintenance also means more cash. All teams which participated in RFC India had their support teams and vehicles to address breakdowns, which are on the higher side for a six-day event the cost of which is easily imaginable.

However, the sport is appealing and should soon have a fan following to make it watchable on TV for its sheer breath-taking adventure.

For example, the action attracted big crowds at Dona Paulo in the first two days as locals began pouring in after hearing the loud, dauntingly large 4X4s revving up the engines and burning their tyres.

The flip side of it is that most of the action happens away from civilisation in the forests where it is not easy for the spectators to drive in.

But the action sounds very alluring and a TV broadcast can entice the uninitiated. After all, motorsport is as exciting on TV as it is live.

The current contract for RFC India is for three years and if Cougar Motorsport can find ways to promote it and if it is accessible to the lay watcher it will have a bright future. It has to be financially viable, too. - IANS