Why no Modi-fication on Kachchativu? 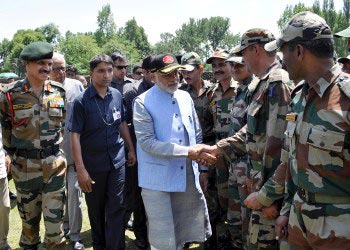 The reiteration of the Ministry of External Affairs in an affidavit before the Madras High Court that India had no sovereign right over Kachchativu (also spelt as Katchatheevu), an uninhabited barren islet in the Palk Strait, and that the maritime boundary between India and Sri Lanka was a settled issue, has prompted Jayalalithaa, Chief Minister of Tamil Nadu, to write to Prime Minister Narendra Modi, urging him to direct the concerned officials to file an appropriately revised affidavit reflecting the BJP stand spelt out during the recent Lok Sabha election campaign.

Kachchativu, she said, is an integral part of India and it cannot be ceded without a constitutional amendment. Fisherman Care, a Chennai-based welfare organisation of fishermen, had moved the High Court seeking a directive to the Centre to clarify the then External Affairs Minister’s statement in Parliament on 22 August last on Tamil Nadu fishermen crossing the International Maritime Boundary Line (IMBL) and being attacked by the Sri Lankan Navy.

The Indira Gandhi government ceded Kachchativu to Sri Lanka by an agreement on 26 June, 1974, and the maritime boundary between the two countries was redrawn and agreed upon by another agreement dated 23 March, 1976.

Tamil Nadu never acquiesced to either of the two agreements and has been demanding the retrieval of Kachchativu ever since. Jayalalithaa, and the former Tamil Nadu Chief Minister M Karunanidhi of the DMK, had challenged the ceding of Kachchativu without following the constitutional proviso in the Supreme Court.

The affidavit filed in the Madras High Court on 1 July by the MEA is only a carbon copy of the affidavit filed earlier by the UPA government in the Supreme Court. Obviously, the External Affairs Ministry officials have not applied their minds to the issue after Sushma Swaraj has taken charge.
There were great expectations among the fishermen community in Tamil Nadu when Modi took over as Prime Minister and Swaraj as External Affairs Minister that they would put an end to the almost daily attacks and abduction of fishermen and destruction of their trawlers by the Sri Lankan Navy.

The UPA government of Manmohan Singh had allowed these attacks to escalate in the last decade. There was a brief respite in the early months of this year when Sri Lanka feared that Jayalalithaa could well emerge as the Prime Minister by forming a government of regional parties and directed its Navy to refrain from attacking trawlers from Tamil Nadu crossing the IMBL.

During his election campaign Modi promised to wipe the tears of fishermen constantly exposed to attacks in the high seas by foreign navies. The BJP organised a conference called “Kadal Thamarai” (Sea Lotus) in Rameswaram on 31 January in which Swaraj gave an assurance that if the BJP was voted to power it would form a separate Ministry of Fisheries to look after the interests of the most neglected fisher community throughout the country.

Mahinda Rajapaksa, President of Sri Lanka, who was a guest at the 26 May swearing-in ceremony of the Modi government, waited for five days to study the contours of the Ministry of Fisheries promised by Swaraj to emerge and finding there was no sign of it, gave the green signal to his Navy to resume its customary attacks on fishermen from Tamil Nadu.

On 1 June, the Navy struck, capturing 33 fishermen from Rameswaram and seven trawlers. On 7 June, the attack was stepped up to take 50 fishermen and their trawlers into custody. The Sri Lankan Navy has been emboldened by the MEA affidavit.

When Kachchativu was ceded to Sri Lanka in 1974, Prime Minister Indira Gandhi ensured that fishermen from Tamil Nadu and their interests were protected. Article 5 of the Agreement says: “Indian fishermen and pilgrims (to the annual St. Antony’s Festival) will enjoy access to visit Kachchativu as hitherto, and will not be required by Sri Lanka to obtain travel documents or visas for these purposes.”

Seenikuppan Padayachi, a Tamil Nadu fisherman, had built a church in Kachchativu, and named it after St. Antony’s, considered the patron of fishermen, a century ago. Article 6 says: “The vessels (trawlers) of India and Sri Lanka will enjoy in each other’s waters such rights as they have traditionally enjoyed therein.”

This agreement has neither been annulled nor superseded. The 1976 agreement has nothing to do with Kachchativu or the Palk Strait in which it is located.

The preamble of the 1976 document says it is an agreement between India and Sri Lanka on the maritime boundary between the two countries in the Gulf of Mannar and the Bay of Bengal and related matters.

Exclusion of the Palk Strait and Kachchativu from the 1976 agreement is significant. Articles 5 and 6 of the 1974 agreement had protected the rights of Indian fishermen. Regarding the drawing of the IMBL, Thomas Abraham, Indian High Commissioner in Sri Lanka in the 1970s, says, “New Delhi deliberately deviated from the median line in order to see that Kachchativu fell outside the Indian side.”

Nevertheless, until the Supreme Court gives its verdict, the 1974 agreement is binding on the two countries and fishermen from India are perfectly within their rights to fish in the waters of Kachchativu. Any attack on them by the Sri Lankan Navy is tantamount to attack on India. If the BJP government also allows Sri Lanka to flout the 1974 agreement with impunity, it will be a sad day for Tamil Nadu fishermen.

The Sri Lankan authorities have been honouring Article 5 of the 1974 agreement but not Article 6. New Delhi should insist Colombo honours the 1974 agreement in toto or scrap it altogether. It cannot allow Sri Lanka to implement it selectively. Colombo’s interpretation that “such rights as they have traditionally enjoyed therein” do not include fishing is nonsense.

“The vessels of India” did not use the waters of Kachchativu for picnic or yachting. The “traditional rights” Indian fishermen enjoyed were only fishing rights. Besides, they used the islet to dry their nets and take shelter in times of storms. Unfortunately, the clever Sri Lankan bureaucrats have succeeded in convincing their Indian counterparts that the 1976 agreement on maritime boundary has superseded the 1974 agreement and Indians have no rights whatsoever over Kachchativu and its waters.

The letter too is silent on Kachchativu. The Indian fishermen’s rights built into the agreement signed by Indira Gandhi and Sirimavo Bandaranaike on 26 June, 1974, cannot be bartered away by the exchange of letters by officials of the two countries. Yet the Indian Navy and Coast Guards have been instructed by New Delhi to treat fishermen from Tamil Nadu found in Kachchativu waters as transgressors.

It may be recalled that Atal Behari Vajpayee, who was in Bombay when Parliament took up the debate on Kachchativu, telephonically instructed his party colleague in Chennai, Jana Krishnamurthy, who subsequently became the BJP president, to file a petition in the Madras High Court challenging the cession.

Since ‘committed’ judiciary and bureaucracy were the flavour of those days, Indira Gandhi had no difficulty in getting the petition dismissed.

If the Modi government wants documents to establish India’s sovereignty over Kachchativu, it must be mentioned that copies of lease deeds executed by the Raja of Ramnad between 1880 and 1922, and revenue records relating to Kachchativu, still available with Raja Sethupati of Ramnad, were placed on the table of the Lok Sabha by Muhammad Sheriff, who represented the Ramanathapuram constituency, on 1 April, 1968.

Judicial decisions of the Madras High Court also establish beyond doubt that Kachchativu belonged to the Raja of Ramnad. If there were hopes among fishermen that achche din aane wale hain with the advent of the Modi government, they are fading fast.