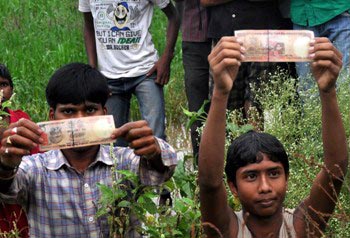 “The BJP is committed to initiate the process of tracking down and bringing back black money stashed in foreign banks and offshore accounts,” said the party’s 2014 election manifesto, and promised to bring back the money which rightly belongs to the country on a priority basis.

It also promised to “minimise the scope of corruption to ensure minimisation of the generation of black money.” One month in office is too short a time to redeem its promise on black money which no government, including that of Vajpayee, could achieve in the last 65 years.

What the Narendra Modi government has done in the past one month on the black money front does not inspire confidence. More than 40 commissions and committees had been established in the past to tackle the black money; none succeeded in bringing back the money.

The setting up of the Special Investigation Team as per the Supreme Court mandate is unlikely to produce results different from the earlier ones.

If Modi is sincere about repatriating black money stashed in Swiss banks, his government could have promulgated an ordinance to nationalise black money held by Indian citizens in tax havens abroad and bring the money back into India’s financial system.

Such an ordinance would be in consonance with the Swiss Federal Act on the Restitution of Illicit Assets Act of 1 October, 2010. Simultaneously, the government should take steps to minimise generation of black money.

To begin with, it could put an end to Participatory Notes, an instrument authored by BJP finance minister Yashwant Sinha in the Vajpayee government but perfected by P Chidambaram, Congress finance minister, to enable politically exposed persons to generate and launder ill-gotten money anonymously.

Participatory Notes (PN) are leveraged instruments involving Indian equity, debt or derivatives issued by Foreign Institutional Investors to individuals and institutions who wish to invest in Indian stock market without registering themselves with the market regulator, the Securities and Exchange Board of India.

While an Indian citizen has to provide address proof, photo ID proof, PAN details etcetera to open an ordinary savings account in a local bank, foreign investors can hide their identity by making use of PN to route their investments, often running into hundreds of crore. The main attraction of PN is the anonymity it provides.

What worries the SEBI is the source of the huge amount of foreign money that flows into the country through this route. More often than not black money generated in the country is sent out by hawala operators and re-routed by PN targeting the Indian stock markets for their “pump and dump” moves.

Terrorists too are known to park their funds in PN which almost all top Foreign Institutional Investors (FIIs) like Merrill Lynch, Morgan Stanley, and Credit Lyonnais issue.

MK Narayan, then National Security Adviser, told the 43rd Munich Conference on Security Police on 11 February, 2007, “Instances of terrorist outfits manipulating the stock markets to raise funds for their operations have been reported. Stock exchanges in Chennai and Mumbai have, on occasion, reported that fictitious or notional companies were engaging in stock market operation. Some of these companies were later traced to terrorist outfits.”

It shows the UPA government was well aware that terrorists were also using PN to park funds in India because it gave them anonymity, but did not want to give up the goose that laid the golden eggs.

PN worth lakhs of crore rupees were being actively traded in the Indian stock markets. The Reserve Bank of India had cautioned that black money was going out of the country and being brought back as legitimate funds by PN. Yet Chidambaran stubbornly refused to withdraw PN.

However, if investments are routed through Mauritius, they would be exempt from capital gains tax in India. In effect, there are no taxes on Mauritius-based FIIs investing in India. In September 2006, SEBI imposed a fine of Rs. 1 crore on Goldman Sachs (Mauritius) for its failure to report the issuance of PN to Magnus Capital Corporation based in Mauritius.

On 5 May, 2008, the Securities Appellate Tribunal not only set aside SEBI’s order against Goldman Sachs (Mauritius) as it considered the market regulator was not justified in asking FIIs to report issuance of PN, but also ordered SEBI to pay Rs. 1 lakh to Magnus.

After the UPA came to power, Mauritius, the tiny Indian Ocean island nation populated mostly by people of Indian origin, had emerged as the largest investor in India, accounting for almost half of the country’s FDI.

The tax losses to India as a result of the DTAT are estimated at thousands of crores of rupees. In June 2013, a SEBI committee on “Rationalisation of Investment Routes and Monitoring of Foreign Portfolio Investments” recommended steps to reduce risks stemming from PN trading. Nothing came of it. The Prevention of Money Laundering Act should be suitably amended to include details of every Indian holding shares directly or indirectly in Mauritius-registered companies.

When the State distributes scarce natural resources to select cronies at the expense of the many, as the UPA government had been doing in the last 10 years like distribution of 2G spectrum or coal blocks, it inevitably leads to accumulation of black money in the hands of a few. The UPA was immune to criticism. The Opposition was content with disturbing proceedings in Parliament. The 15th Lok Sabha has gone down in history as the most disrupted House since independence.

Subramanian Swamy who exposed the 2G spectrum scam wrote to then Prime Minister Manmohan Singh giving details of the 2G money trail. It was simply ignored. Since Swamy is now one of the leaders of the BJP, Modi can utilise his services in tracking and if possible retrieving the bulk of the spectrum slush fund stashed abroad.

Knocking at the doors of Swiss banks to bring back black money is a chimera. What happened to hawala operator Hassan Ali Khan’s Swiss bank deposits aggregating $8.04 billion, discovered by the Enforcement Directorate in 2007, should be a lesson to the Modi government.

The Manmohan Singh government sent a Letter Rogatory to the Swiss government complaining that Khan had not filed his tax returns in India - which is not an offence under the Swiss law - and the complaint was dismissed.

The ED took two years to serve a show cause notice on Khan demanding that he repatriate the money to India with interest, giving him ample time to empty his Swiss accounts. In this age of internet banking money can be transferred by a click of the mouse. Ali emptied his Swiss accounts of the billions in no time.

Even if the SIT finds out details of the money stashed in tax havens by the politically exposed persons, all it can do is to file the First Information Report. For prosecution, it will have to depend on the existing legal system which is notoriously friendly to the rich and the powerful.

To give an example, the trial of a wealth case against a politically powerful person has been dragging on for more than 17 years. The Supreme Court has allowed the accused to choose the judge and the prosecutor and stayed the hearing time and again at the will and pleasure of the accused after directing the trial court to dispose of the case speedily. The accused is not happy with the judge hearing the case now and wants him replaced. The people are waiting and watching with bated breath what is going to happen to the case next.