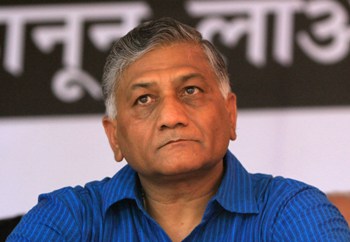 The Supreme Court has finally come around to hearing the petition of Lt-Gen Ravi Dastane, one of the senior-most Lieutenant-Generals in the Indian Army, in the second week of July. It was to have been heard on 2 May but the Defence Ministry under AK Antony got it deferred to September which would have rendered his case infructuous and facilitated the implementation of the ‘line of succession’ drawn up by the UPA government without let or hindrance.

As a Lieutenant-General, Dastane would reach the age of superannuation on August 31. His case hinges on the actions taken by Gen Bikram Singh who took over as the CoAS from Gen VK Singh on 1 June, 2012.

A cabal of bureaucrats in the MoD having links with the arms lobby and drug traffickers is hell bent on ensuring the status quo ante and running down VK Singh, now a member of Narendra Modi’s Council of Ministers.

Dastane’s writ petition has nothing to do with VK Singh or his alleged prejudice against Lt-Gen Dalbir Singh Suhag, designated as the Chief of the Army Staff by the outgoing government of Manmohan Singh although the post will fall vacant only on 31 July when Bikram Singh demits office.

The undue haste shown by the UPA government in naming the Army chief designate three months ahead of time contrasts with its keeping the post of the Chief of the Navy Staff vacant for 40 days and tells its own story.

Even after the BJP government assumed office on 26 May, the Defence Ministry bureaucracy has not shed its loyalty to the UPA and Minister Arun Jaitley is too busy with his finance portfolio to devote much needed attention the defence portfolio deserves.

Dastane’s writ clearly points out that the MoD had put up only two names to the Appointments Committee of the Cabinet to fill the vacancy of two Army Commanders in the summer of 2012. According to the rules, four names should have been submitted which would have automatically included Dastane’s as well.

Suhag was then under Discipline and Vigilance ban and therefore not eligible to be promoted. Had Dastane got his rightful promotion as Army Commander then, he would have been the one in line to succeed Bikram Singh as the CoAS based on the principle of seniority and unblemished service record.

The Discipline and Vigilance (DV) ban imposed on Lt-Gen Dalbir Singh Suhag, Commander of 3 Corps, was based on the advice and recommendation of the Judge Advocate General branch of the Army and the Vigilance branch of the Army Headquarters respectively for failing to take appropriate action in the Dimapur fake encounter case and the Jorhat dacoity case.

The Court of Inquiry by the Army found the Intelligence Unit working directly under the 3 Corps Commander was responsible for the extra-judicial killings in Dimapur. The recovery of most of the loot from the officers of the unit by the police in the botched up Jorhat dacoity was proof of its involvement.

Suhag was found shielding the culprits against whom there were several other allegations also, including dabbling in narcotics smuggling, by misusing the Armed Forces Special Powers Act. The DV ban order of 19 May, 2012, was signed by Gen VK Singh in his capacity as the CoAS just as the Government of India Orders are issued in the name of the President.

The Army chief cannot impose DV ban on any officer on his whims and fancy. The procedure for it is clearly laid down in the Army rules book. Bikram Singh kept the post of Army Commander vacant for a fortnight, unheard of in the annals of the Indian Army, just to accommodate Suhag, which he achieved by illegally lifting the ban on the tainted officer without even waiting for a reply to the show cause notice.

His initial appointment was in the rank of ‘Acting’ Army Commander with effect from 1 June, 2012. In the process, Dastane, next in seniority, missed out on being promoted as Army Commander for no fault of his. The Court of Inquiry and subsequent Court Martial which indicted all the accused in the two cases fully justified the DV ban imposed on Suhag by the JAG, legal wing, and the Vigilance branch of the Army Hq.

The growing demand for the repeal of the AFSPA could be attributed to instances like the Dimapur fake encounter. The families of the deceased had been terrorised by the Army into silence for two years.

Eventually, Major Takula Ravi Kiran of 3 CIU wrote to the Brigadier General Staff of 3 Corps under Suhag giving lucid details of the cold-blooded triple murder that took place behind the Officers’ Mess of the unit on 13 March, 2010.

Phijam Naobi, RK Roshan and Thounaojam Prem were abducted by the Army from the Char Mile area of Dimapur in Nagaland, tortured and shot dead by the Intelligence Unit headed by Col Shreekumar. Despite the FIR and evidence on record, Suhag refused to act.

On 17 March, 2010, Dimapur police was informed by Assam police that three bullet-riddled bodies were found by the Bokajan police station of Karbi Anglong district. On physical verification, the bodies were found to be that of the three abducted by the IU unit on 10 March.

The same unit was responsible for the Jorhat dacoity also, eventually leading to the DV ban on Suhag. The Court Martial that followed found all 15 officers of the unit guilty. The punishment meted out to these offending personnel was extremely mild, resulting in the Guwahati High Court stepping in and asking for all the records of the Court Martial. The logic was clear: if dacoity was established, how could those found guilty be let off with mild rebukes whereas, under the Indian Penal Code, similar crimes attracted a minimum of five years rigorous imprisonment?

The Intelligence Bureau, meanwhile, has come across the narcotics lobby intensifying its bid to penetrate senior ranks in the military for nefarious activities. There has been a steady flow of narcotics from the Golden Triangle of Laos, Vietnam and Myanmar into Manipur and Nagaland for distribution to markets throughout the country.

The Ministry of Defence completely ignored the participation of rogue military elements in this lucrative trade. More than 20 tonnes of heroin is reportedly smuggled through the Myanmar border annually with the help of the military. A kilogram of heroin available for about Rs. 70 in Myanmar fetches up to Rs. 5 lakh in India.

According to informed sources, corruption, including through involvement in drug trafficking in the forces, had been ignored for too long. An inquiry into some of these high ranking ‘black sheep’ in the Army who send their children to expensive foreign universities and financing them through hawala channels would reveal the extent of corruption, pointed out a well informed source. A few of these students had acquired even landed property in the advanced countries they are supposed to be studying in.

Former Army chief VK Singh came a cropper trying to cleanse the forces of its involvement in narcotics smuggling as it was resisted by MoD bureaucrats who had gone to the extent of drafting the controversial affidavit filed in the Supreme Court to discredit the former Army chief, stating the DV ban order served on Suhag was “illegal, unjust and against the principles of natural justice,” and that it was the handiwork of VK Singh.

If an Army unit “kills innocent people, commits dacoity and the head of the organisation tries to protect them, should he not be blamed? Should criminals go free?” asks VK Singh, more in sorrow than in anger.

Its legitimacy is being questioned. Defence Minister Jaitley is said to have ordered an inquiry into how this objectionable affidavit came to be filed in the Supreme Court which pits one minister against another in the Modi government. The people of India hold the Army in high esteem. VK Singh is known for his honesty and integrity. One cannot imagine him coexisting in a government which confirms Suhag as the Chief of the Army Staff.