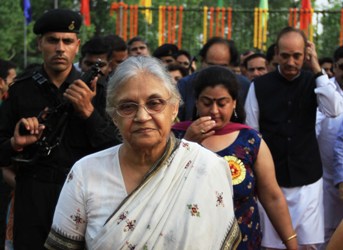 Had the worthies occupying the fabulous Raj Bhavans in the country been men and women of eminence as envisaged by the founding fathers of our Constitution, we would have been spared the spectacle of Governors clinging on to the safe and cosy havens even after the President has withdrawn his pleasure and the message communicated to the unwanted Governors by the Union home ministry.

The Indian National Congress, which had been in power continuously for 30 years since independence, had set a bad precedent by reducing the office of Governor as a product of the spoils system, and therefore the Governors have no business to continue in office once the political bosses who appointed them have been voted out.

Political etiquette and decency demand the Governors resign like the Attorney-General and the Solicitor-General whenever there is a change of government. When the issue of removal of Governor was discussed in the Constituent Assembly, Shibban Lal Saksena, KT Shah and Loknath Mishra wanted it to be codified in the Constitution.

BR Ambedkar, chairman of the drafting committee, said in reply, “this power of removal is given to the President in general terms. What Prof Shah wants is that certain grounds should be stated in the Constitution itself for the removal of the Governor.

“It seems to me that when you have given the general power, you also give the power to the President to remove a Governor for corruption, for bribery, for violation of the Constitution or for any other reason which the President no doubt feels legitimate ground for the removal of the Governor.

“It seems, therefore, quite unnecessary to burden the Constitution with all these limitations stated in express terms when it is perfectly possible for the President to act upon the very same ground under the formula that the Governor shall hold office during his pleasure. I, therefore, think that it is unnecessary to categorise the conditions under which the President may undertake the removal of the Governor.”

The intention of the founding fathers was to adopt the Doctrine of Pleasure instead of the impeachment or inquiry route for the removal of Governors. Article 153 of the Constitution provides that there shall be a Governor for each State of the Union.

Article 154 vests the executive power of the State in the Governor. Article 155 provides that the Governor of a State shall be appointed by the President by a warrant under his hand and seal. And Article 156 (1) of the Constitution states clearly: “The Governor shall hold office during the pleasure of the President.”

The Governor shall hold office for a term of five years and continue to hold office until his successor enters upon his office. The Pleasure Doctrine has its origin in English law with reference to the tenure of public servants under the Crown. A public servant under the British Crown had no tenure but held his position at the absolute discretion of the Crown.

The Latin expression “durante bene placito (during pleasure) in effect means that the tenure of office of a civil servant, unless covered by statute, can be terminated at any time without assigning any cause. In other words, civil servants are liable to dismissal without notice and there is no right of action for wrongful dismissal.

Founding fathers expected persons of caliber, experience and distinction to be chosen as Governors, not to enable them to earn their livelihood or find a roof over their heads, but to serve the people. When they accept the office they know that they will be holding it only during the pleasure of the President.

Unfortunately, the Congress has treated the office of Governor as a sinecure for their superannuated or unelectable politicians and retired bureaucrats who served the party interests rather than that of the nation well when in office. Sadly, other political parties too have been treading the same path. How some of these worthies behaved while safely ensconced in Raj Bhavans is a sad chapter in the post-independence history of the nation.

Instances of the party in power misusing the office of Governor to promote its political interests are too many to enumerate. On Independence Day Anno Domini 1983 Prime Minister Indira Gandhi got Thakur Ram Lal, defeated Chief Minister of Himachal Pradesh, rehabilitated as the Governor of Andhra Pradesh where the Congress lost power for the first time in 1980 to the fledgling Telegu Desam Party led by NT Rama Rao.

Taking advantage of an open heart surgery Rama Rao had undergone in August 1984, Ram Lal declared Rao had lost his majority in the Assembly. With a bleeding heart, Rama Rao reached the Raj Bhavan accompanied by 153 MLAs supporting him in a House of 293. Ram Lal dismissed the Ram Rao government and installed a puppet TDP defector as Chief Minister who simply could not muster majority support even after assuming power.

Sheila Dikshit, who lost the Delhi election last year, was hurriedly posted as Governor of Kerala by the Congress-led UPA government hours before the Election Commission notified the Lok Sabha election in March. She was facing criminal corruption charges in Delhi and the gubernatorial post has given her immunity from court appearance.

She is leading the pack of Governors who had lost the pleasure of the President and threatened to move the Supreme Court to stay put in the Thiruvananthapuram Raj Bhavan. One of the Governors who had lost the President’s pleasure has the unique distinction of suppressing vital clues in the Rajiv Gandhi assassination case for which a CBI case is pending against him since the 1990s. He is wanted to be examined by the CBI in the AgustaWestland VVIP helicopter scam also.

It is ironical that Sheila Dikshit should take shelter under the Supreme Court Constitution Bench judgment of 7 May, 2010, on a PIL filed by a BJP MP, BP Singhal, under Article 32 of the Constitution, following the removal of the Governors of Uttar Pradesh, Gujarat, Haryana and Goa by the President on the advice of the Manmohan Singh government in 2004.

The petitioner contended that the withdrawal of presidential pleasure under Article 156 should not be “arbitrary, capricious, unreasonable or mala fide” and that it should be by a speaking order so as to apprise the Governor and the public the reasons for considering the person unfit to continue in office.

The Pleasure Doctrine was not fully adopted by Section 240 of the Government of India Act, 1935, or by Article 310 (1) of the Constitution. Article 311 lays down the requirements under which the pleasure of the President could be exercised.

The 7 May, 2010 order of the Constitution Bench in the Singhal case says, “As there is no need to assign reasons, any removal (of Governor) as a consequence of the withdrawal of the pleasure will be assumed to be valid and will be open to only a limited judicial review.

If the aggrieved person is able to demonstrate prima facie that his/her removal was either arbitrary, mala fide, capricious or whimsical, the court will call upon the Union government to disclose to the court the material upon which the President had taken the decision to withdraw the pleasure…The court will not interfere merely on the ground that a different view is possible or that the material or reasons are insufficient.”

The ruling leaves enough room for the Modi government to get rid of the unwanted Governors who are clinging on to office even after being informed of the withdrawal of the pleasure of the President.