The real reason why the media is angry with Kejriwal 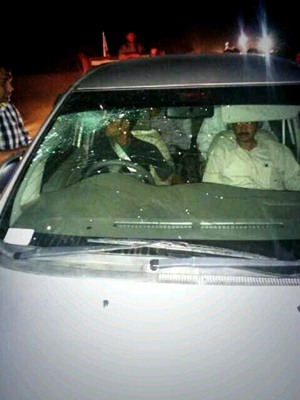 It is amusing how self-righteous the Indian media can get over a so-called threatening admonition from Arvind Kejriwal.

If I was in Kejriwal's shoes, I would be as angry and upset as he is with sections of the fourth estate, some of the electronic media in particular.

In no general election in my over three decades in journalism have I seen such brazen targeting of one politician and one political outfit as I see now in the case of Kejriwal and his Aam Aadmi Party (AAP).

It is very evident that there is a conscious decision to blackout Kejriwal as much as possible but pounce on him if he slips.

So if the AAP rallies outside the BJP headquarters in Delhi - quite unnecessarily, in my view - it was made out as if a terror attack had taken place!

Not only was one-sided blame heaped on the AAP when TVs showed stones and more hurled out of the BJP office, but the physical attack on Kejriwal's car in Gujarat was either blacked out or reported almost in passing.

Would the media have behaved similarly if Modi's car had been attacked?

One can multiply examples. But there is no need to.

What is more important is this: why should Kejriwal be the focus of partisan reporting when he heads a mere 16-month-old fledgling party that is not in power anywhere?

For answer, we need to return to December 2013.

The Indian media, without exception, got it all wrong vis-a-vis the AAP when the Delhi elections were held.

When the AAP galloped to the second spot with 28 seats in a house of 70, it was a stunner. Not only was the BJP denied a victory but Kejriwal proved that the so-called Narendra Modi wave could be derailed.

This rang alarm bells in sections of the establishment that was not comfortable with the income tax officer-turned-activist-turned-politician's zeal to take on entrenched vested interests.

So it was necessary to "prove" that Kejriwal cannot "govern". I will skip the details.

But Kejriwal's exit as chief minister over the Jan Lokpal bill has opened another front. The man with seemingly unlimited energy was now free to tour the country soliciting support for the AAP.

With the Congress in doldrums, it is important to spike the AAP's spread in urban areas in particular. The AAP should not be underestimated a second time.

Since Kejriwal is a good communicator, the one way to limit his appeal is by limiting his exposure in the media when he campaigns almost like a street fighter.

This is why most people saw most of what Kejriwal did in Gujarat on YouTube, not in dominant sections of the Indian media.

Images are powerful. If you use television cameras with skill, then opinions can be manufactured.

When Kejriwal gave his political speeches in Gujarat, television coverage was nil or minimal. But if he drove to Modi's residence, images were aplenty - to "prove" he is into "drama" again.

This is not a new phenomenon.

When Anna Hazare fasted in Delhi, I was intrigued by a television channel's unending references, even on the first day of the protest, to the crowds said to be packing the Ramlila Maidan "choc-a-block".

I knew the channel's cameraman. I phoned him.

His answer remains etched in my memory: "Sir, there are only 30-35,000 people here. Most of the ground is empty. But we have been told to focus our cameras only where people are seated. We aren't supposed to say how many people are here but keep repeating 'choc-a-block".

Huge crowds did throng the Ramlila ground later. But that is another story. Today, this very television channel is part of the anti-Kejriwal brigade!

(M.R. Narayan Swamy is a senior journalist. These are his personal views.) - IANS