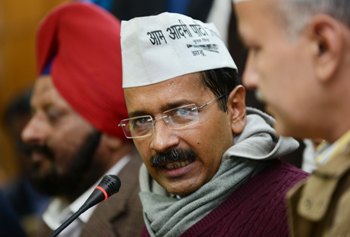 Many Muslims in Delhi are very happy with the arrival of Arvind Kejriwal and his Aam Aadmi Party (AAP) on the political scene. But Muslims, who always had a representation in the Sheila Dikshit cabinet, are disappointed that there is no Muslim in Kejriwal's cabinet.

Muslims themselves are to be blamed for this. Prior to and during the Delhi elections, Kejriwal left no stone unturned to court Muslims and their leaders. But neither Muslim groups nor Muslims supported him the way other segments of the population did.

When he met Maulana Tauqir Raza, the firebrand Muslim leader from Bareilly, he was bitterly criticized by the media and his critics. He however defended his meeting and sought to justify seeking support of the Muslim clerics and other Muslims.

Days before the election, Kejriwal met the amir of a top Muslim group in Delhi. Kejriwal announced later that the Muslim organization was ready to back the AAP. But amazingly, the same day this group announced its support for two Congress candidates. Almost every other Muslim group did the same.

There is no doubt that Muslims are feeling left out due to their leadership's lack of ability to see what was destined to come. Even now there are many so-called Muslim intellectuals who continue to doubt the AAP.

Muslims were reluctant to join the Anna Hazare movement because of its closeness to Saffron parties. After coming out of the Anna fold, Kejriwal has portrayed himself as the champion of Aam Aadmi.

But so far his crusade has been directed mainly against corruption in the government and to some extent poverty. The AAP is yet to clarify its position on issues like secularism, reservation and communal riots.

It is also not clear yet whether the AAP's rise will hit the Bharatiya Janata Party (BJP) or the Congress more.

But there are some among Muslims who have been calling on the community and its leaders to support the AAP before it is too late. A Mumbai-based senior Muslim activist says Kejriwal has been trying his best to open communication with Muslims. This activist contacted Kejriwal two years back in Delhi.

At a meeting in Mumbai, representatives of some Muslim groups bombarded Kejriwal with a host of questions. Kejriwal spoke in his usual frank and free manner. Except for those more concerned with a Congress backlash, others welcomed Kejriwal (who was with Manish Sisodia) as a no-nonsense, single-minded activist who wants to cleanse governance of this country.

A political organization like the AAP can be trusted to bring the people of all faiths together and work for making people accept one another as fellow human beings, and not on caste or religion basis.

There is no doubt that but for the AAP and Kejriwal's charisma, Shazia Ilmi couldn't have got 27,691 votes from R.K. Puram where there are hardly any Muslim voters. She lost by just 300 votes.

Ishrat Ali Ansari of the AAP got more than 15,000 votes from Krishna Nagar from where Harsh Vardhan, BJP's chief ministerial candidate, contested. In this constituency too there are hardly any Muslim voters.

The rise of the AAP seems to be a triumph for secularism and Indianness. Muslim groups that have a huge influence over the Indian Muslim community shouldn't ask him to speak out on contentious issues like riots and communalism. There are common issues for all Indians, and Kejriwal and his AAP are trying to bring the whole nation together.

Ordinary Muslims have the same issues and problems confronting them in their daily lives like ordinary Hindus, Sikhs and Christians.

Poverty, illiteracy, corruption and lack of employment avenues are common concerns. The AAP promises to work on all these issues. Let's give it a chance.

(Syed Ubaidur Rahman is the author of "Understanding the Muslim Leadership in India". The views expressed are personal. He can be reached on [email protected])