Portrayal of Tamil assertion in films 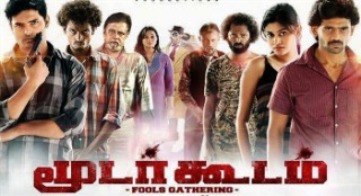 First, let me say that I thoroughly enjoyed watching debutant director Naveen’s Moodar Koodam (Fools Gathering). A low budget movie of a genre that is rarely taken up in Tamil cinema - dark humour - it was good entertainment.

The comic storyline, interspersed with even more comic flashbacks, the lack of an infallible hero and his often senseless romance, a narrative that gives weight to all characters, make the movie a worthwhile watch.

While I appreciate the style of the movie, I have to disagree with some aspects of its content. The director seems to have unnecessarily mixed what could have been a good comedy on its own with a social commentary that is banal.

The semi-pedagogical dialogues on communism and the ills of capitalism seem rather pointless especially at a time when most communists in India don’t know what it is that they are fighting for.

The romanticising of the rural as naively good and the cursing of the urban social elites as being morally corrupt has become a boring theme.

This ranting against English, IT professionals, the upwardly mobile has been hammered through Tamil cinema enough.

After a point, the contempt for knowledge and modernity gets really annoying. And it also makes one wonder whether what is being advocated is a rule similar to the Sharia laws...

But why is it that the Tamilophile is usually a crass, frustrated, lower/lower-middle class male who mostly behaves like a sociopath?

Haven’t we had enough with Katradhu Tamizh where the protagonist, a misogynist, goes around killing, beating and molesting people because they did not conform to his notion of Tamil culture?

Or rather, why can’t a smooth and suave and socially refined man - or for that matter, woman - be a Tamilophile? The latter would be the really radical thing to portray.

Likewise, the scene from the movie, where one of the protagonists harasses a guy for talking to him in English, which is in wide circulation in social media, cannot appeal to the learned.

A positive assertion of identity cannot be based on paranoia and insecurity and berating your own for neglecting their 'roots', real or imagined. But again, to be fair to the director, maybe this is why he called his movie ‘Moodar Koodam’.

A much radical portrayal of Tamil assertion can be seen in a particular scene in the movie Tamizh Padam. A reel Manmohan Singh calls up the protagonist asking him to take-up a police assignment, speaking to him in Hindi throughout.

After hearing out the Indian Prime Minister with an indifferent look on his face, the protagonist replies in Tamil “Sorry PM ji, I don’t know Hindi” and cuts the phone.

The Indian PM is left with a bewildered look on his face. Comedy apart, this scene speaks more for an assertive Tamil nationalism than all the “Tamil kalaachaaram (culture)” jingoism that we have been subject to in other movies.

When you look at it, the protagonist of Tamizh Padam is really 'speaking truth to power' when he tells the highest political authority of India that he (symbolically representing Tamils) can’t speak Hindi, and refuses to engage in further conversation.

This is the real positive assertion of identity - being confident without being xenophobic, refusing to entertain dialogue with the Other who does not recognize you, while at the same time not boring yourself and those around you with didactic rants.

Indeed Tamil Nadu’s identity politics of the future cannot be like Moodar Koodam – a gathering of fools.

Karthick RM is a research scholar at the University of Essex. He writes on issues of identity politics, nationalism, culture and Marxism.