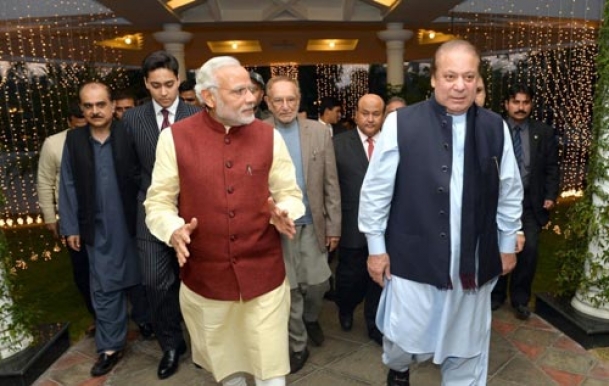 In developments that took most people by surprise, Indian Prime Minister Narendra Modi flew into Lahore on Friday and met his Pakistani counterpart Nawaz Sharif while returning home from Kabul.

After Sharif and Modi hugged at the Allama Iqbal International Airport as he landed in an Indian Air Force plane, the two took a helicopter to Sharif's residence at Raiwind, about 40 km from here, officials here said.


The dramatic visit took place after Modi greeted Sharif on his birthday over telephone from Kabul earlier on Friday and expressed a desire to meet the Pakistani leader, Pakistani media said.

Geo TV reported that the visit "was not that surprising" as the Lahore Air Traffic Control had been told about it on Thursday.

But few in India and Pakistan knew about the programme, which came at a time when bilateral relations have shown definite improvement after months of tensions and border clashes.

Sharif and his brother and Punjab Chief Minister Shahbaz Sharif were among those who received Modi at the airport with bouquets. Also present were Pakistan Finance Minister Ishaq Dar and the Indian envoy, T.C.A. Raghavan.

After pleasantries and a guard of honour by the Pakistani Air Force for Modi, the two prime ministers boarded a helicopter and reached Sharif's ancestral residence at Raiwind for what could be a round of talks -- or more.

Indian and Pakistani officials did not reveal the likely agenda.

Modi and Sharif had met at the Paris Climate Summit on November 30, laying the foundation for a resumption of the stalled bilateral dialogue.

The two foreign secretaries are set to meet in January, also in the Pakistani capital.

It is Modi's first visit to Pakistan and the first trip by an Indian prime minister to the country in 11 years.

Modi's surprise visit came nearly 19 months after Sharif and other South Asian leaders were in New Delhi for Modi's oath taking in May 2014.

Hours before he left for Lahore, Modi addressed the Afghan parliament and blasted Islamabad - but without naming the country - for sponsoring terrorism in Afghanistan.

"Terror and violence cannot be the instrument to shape Afghanistan's future or dictate the choices Afghans make," Modi told Afghan MPs. Modi reached Kabul early on Friday after a two-day visit to Russia.

In an obvious reference to Pakistan, Modi said there were "some who did not want us to be here".

"There were those who saw sinister designs in our presence here. There are others who were uneasy at the strength of our partnership. Some even tried to discourage us."

At the same time, Modi said Pakistan must act like a bridge between South Asia and Afghanistan.

"All of us in the region - India, Pakistan, Iran and others - must unite, in trust and cooperation, behind this common purpose and in recognition of our common destiny." - IANS