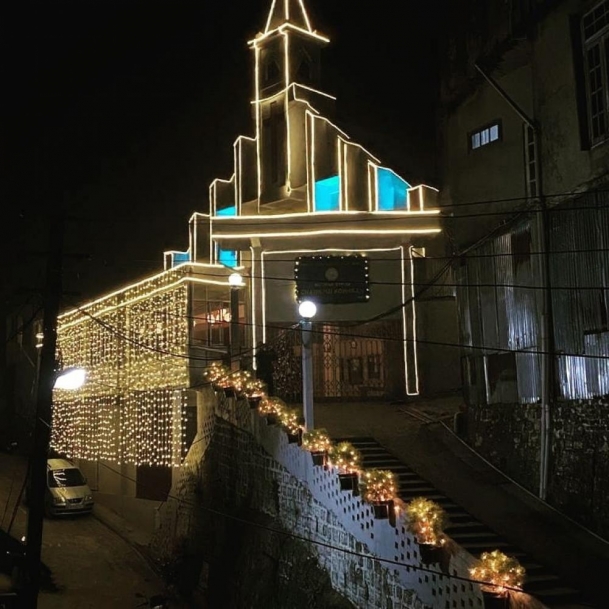 There was something unprecedented about the Christmas celebrations across northeast India on Friday. It was subdued due to the Covid restrictions which forced people to remain indoors.

Since Christmas eve people started celebrating the birth of Christ at their own homes.

The houses and churches were lit up with beautiful lights, flowers and Christians motifs. However, some churches across the eight northeastern states, that have a major percentage of Christian population, wore deserted looks.

Church leaders said that prayers and Christmas Carols would be conducted at family circles. However, a few local cable television channels and various social media channels have telecast the prayers and celebrations at the churches.

Mizoram, Nagaland and Meghalaya looked beautiful as Christmas masses were conducted and the streets were lit up beautifully at midnight.

Over six million Christians live in Mizoram, Nagaland, Meghalaya while there are a significant number of Christians in the other northeastern states of Manipur, Tripura, Assam, Arunachal Pradesh and Sikkim.

All state governments in the northeast have imposed restrictions to avoid public gathering and banned bursting of firecrackers during Christmas and New Year celebrations. Even markets and malls saw limited footfall.

The health authorities and District Magistrates have issued a slew of directives. Police authorities in all the states have made extensive security arrangements to prevent any untoward incidents during the festivities.

The Governors and Chief Ministers conveyed their warm greetings and best wishes to the people of their respective states.

Churches in Mizoram, Nagaland and Meghalaya play a very significant role in the life and culture of the people in these states.

In Mizoram, Christmas is celebrated over several days but this year they have been confined to their homes.

Traditional practices like church carols, community feasts and church programmes are suspended in view of the pandemic. Mizoram Governor P.S. Sreedharan Pillai in his Christmas message expressed his appreciation for the frontline Covid workers.

Pastor Reverend H. Lalrinsanga of the Aizawl Presbyterian Church has appealed to people to pray from at home.

This year Mizoram is witnessing the 150th year of Christmas celebrations after it was first celebrated by the colonial British troops back in 1871.

In Nagaland, the Christmas-eve revelry was missing except for the customary performances and affairs besides illuminations of Churches.

Temperature across the northeast has been hovering around 8 degrees Celsius, making it cold for festivities to take off.

In Meghalaya, despite shops in the state's main commercial hub Police Bazaar wearing a festive look during the past few days with lights and decorations, shopkeepers and vendors have bemoaned that their sales haven't bloomed like previous years. However, they expect to do a good business in the coming days.

The East Khasi Hills District Magistrate has "prohibited the sale, purchase and procurement of foreign-made firecrackers, use of joined firecrackers (series crackers or laris) which cause huge air, noise and solid waste problems, the use of firecrackers generating noise level exceeding normal limits".

Meghalaya Chief Minister Conrad K. Sangma tweeted: "Christmas made more meaningful for the villagers of Rongdingre & Sonsangre in South Garo Hills as they receive Solar Electricity by @GHE_Connect Spreading joy through renewable energy to the remotest villages in Meghalaya ! Let there be light."

Many of the state governments in the northeastern region have announced holidays for several days so that the people can take part in Christmas festivities even in limited circles.

In Tripura, teachers at the Holy Cross College in Agartala said they have been holding Christmas mass in a limited circle since Thursday night.