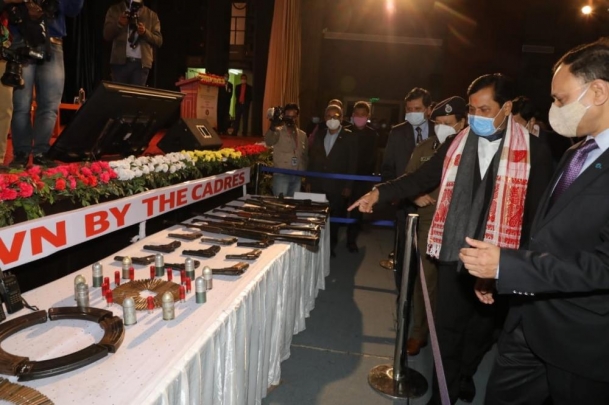 Assam Chief Minister Sarbananda Sonowal on Monday appealed the terrorists to shun the path of violence and join the peace and progress undertaken by the government.

The Chief Minister, while addressing a function where 64 militants of four insurgent outfits surrendered, said the government is giving importance to the surrendered militants and has taken steps so that the youths who have decided to come to the mainstream can take the benefits of the government schemes.

He said that the government has taken adequate steps for rehabilitating the members of the insurgent groups who are coming to the mainstream after laying down arms.

64 terrorists, including 18 United Liberation Front of Asom (Independent) or ULFA (I), 32 United People's Revolutionary Front and 13 Dimasa National Liberation Army and one belonging to the People's Democratic Front of Bodoland deposited 14 AK series rifles, one M-20 semi-automatic rifle, 15 pistols, two 9-mm Carbine many other improvised guns and a large quantities of ammunition.

They surrendered at the famous Srimanta Sankaradeva Kalakshetra in Guwahati, where Chief Secretary Jishnu Baruah and Director General of Police Bhaskar Jyoti Mahanta among other dignitaries were present.

The Chief Minister said that besides the schemes of the Centre, the state government with the help of the scheme called 'Swabalamban' has taken steps to lend dignity to the surrendered militants.

On Monday, ULFA (I) extremists led by self-styled deputy commander-in-chief Drishti Rajkhowa, self-styled C-in-C of People's Democratic Council of Karbi Longri (PDCK) Ong Teron surrendered to the Chief Minister. The 50-years-old Rajkhowa was the second-in-command of ULFA (I) after outfit's chief Paresh Baruah.

The Chief Minister while welcoming the surrendered militants to the mainstream said: "Progress can never be made without peace. Nobody can live peacefully with a heart full of hatred. To take forward the society and family forward, those who took the path of violence must join the mainstream and contribute to the nation building."

He said that those who laid down arms should now commit themselves for promoting brotherhood and friendship and contribute in the ongoing developmental works.

Sonowal also said that paying a rich dividend of the strong leadership of the Prime Minister and the trust and confidence his leadership has infused in the minds of the people, most of the proscribed organisations realising the futility of arms rebellion, have taken the decision to return to the mainstream. - IANS