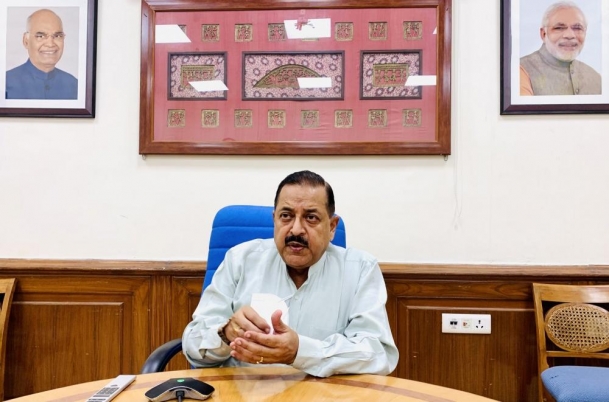 Union DoNER Minister Jitendra Singh said on Saturday that constructing more railway lines and connecting routes between the northeast and other regions are the priorities of the Central government.

Addressing the inaugural function of the two-day North East Festival (NEF), the DoNER (Development of North Eastern Region) Minister said that the region has ample wealth and human resources and the government is trying to exploit these resources and natural reserves for the all round prosperity of the region.

The 8th edition of the North East Festival started on Saturday with a colourful inaugural function in Guwahati.

Addressing the opening session of the festival, Assam Chief Minister Sarbananda Sonowal talked about the encouragement of youth and foster learning to use the resources of the region purposefully and positively.

"Hardworking and united efforts would definitely yield positive and beneficial results for the better and brighter future of northeast India," the Assam Chief Minister said.

Tripura Chief Minister Biplab Kumar Deb said: "The northeast region itself is an asset to the region and its people. Our cuisine can be promoted across the world. The Dhola–Sadiya Bridge (also referred to as the Bhupen Hazarika Setu connecting Assam with Arunachal Pradesh) is a landmark milestone in developing the tourism sector of the region."

Deb said that taming terrorism in the region, the Central government headed by Prime Minister Narendra Modi is taking the erstwhile backward northeastern region to the path of growth and prosperity.

The North East Festival is an attempt to showcase and create awareness about the northeast and to promote entrepreneurship and tourism. One of the major aims of the festival is to attract tourism and investments and create positive vibes during these trying times.

The opening session was also graced by many dignitaries, both in person and virtually, including Foreign Secretary Harsh Vardhan Shringla.

The speakers further highlighted the use of the resources with the advancement of science and technology.

North East Festival's organiser-in-chief Shyamkanu Mahanta said that due to the Covid-19 pandemic, northeast region's first and foremost source of income and livelihood, tourism, has been affected severely and everything has come to a standstill.

"The focus of the festival would be a growth agenda for the northeast region post Covid-19. A new entity, 'NEF Ideation Conclave', would have a series of discussion sessions. The 'North-East Youth Session' would feature prominent personalities of the region, including Zubeen Garg, Anshu Jemsepa, Armstrong Palme, Hima Das, Larsing Ming, Riyan Parag Das, Niti Deb and many others speaking about their journey," he said.

The events of the festival would be telecast for the spectators across the world through digital platforms.

Another session on ‘Make in North East' will see prominent investors in the northeast region, including Numaligarh Refinery Limited, Patanjali and ITC, share their experience of investment in the region.

Some successful startups from the region will also share their story.

Mahanta said that a virtual walk through of North East Festival will be showcased. The evenings will showcase cultural events from across the region.

"North East Festivals over the years have been able to create a positive perception about the region. This time the focus is to highlight the strength of northeast as an investment destination and focus on the region as an ideal tourism destination post Covid-19.

"The virtual North East Festival will aim to create a market linkage for the products of the region and will try to motivate youngsters of the region for entrepreneurship, sports and other activities," Mahanta said. - IANS