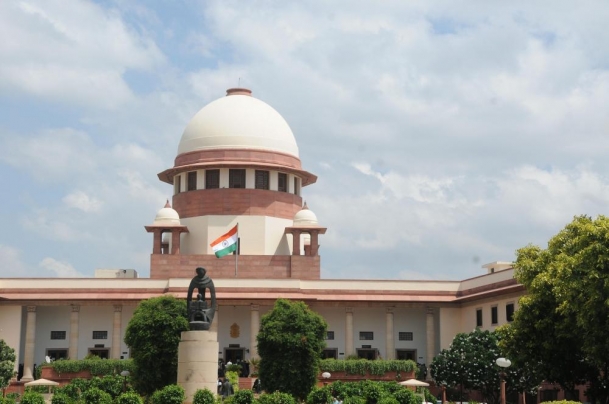 The Supreme Court on Tuesday took strong exception when a shirtless man appeared on screen for a brief period during a videoconference hearing of a case. A similar incident had happened on October 26 as well.

A bench headed by Justice L Nageswara Rao expressed displeasure over the incident and observed that such things were happening even after 7-8 months of court hearings through videoconference amid the coronavirus pandemic.

Justice Rao emphasised that this was not done and asked: "What is this behaviour?"

The Bench, also comprising Justice Hemant Gupta, was hearing a suo motu case connected with the spread of COVID-19 in child protection homes.

Since the beginning of the coronavirus-induced lockdown, the top court has been taking up matters/cases virtually.

Many incidents have occurred wherein lawyers were spotted either lounging on bed or inappropriately dressed during virtual hearings.

On October 26, in a shocker for Supreme Court Judges, a lawyer had appeared on screen shirtless for a few seconds during videoconference hearing of a plea in connection with Sudarshan TV programme "UPSC Jihad".

Justice Indu Malhotra said that the incident was "very inappropriate", while Justice Chandrachud said: "I do not like to be hard on anyone but you are on screen. You have to be careful."

Justice Chandrachud had asked Solicitor General Tushar Mehta and other senior lawyers involved in the case to speak to the lawyer concerned, to ensure the incident was not repeated.

A couple of months ago, a woman lawyer had joined videoconference proceedings while wearing a face pack. In another incident, Justice SK Kaul had to caution a lawyer who appeared in "improper clothes" and was "lounging on the bed" while he went onscreen for the hearing. - IANS