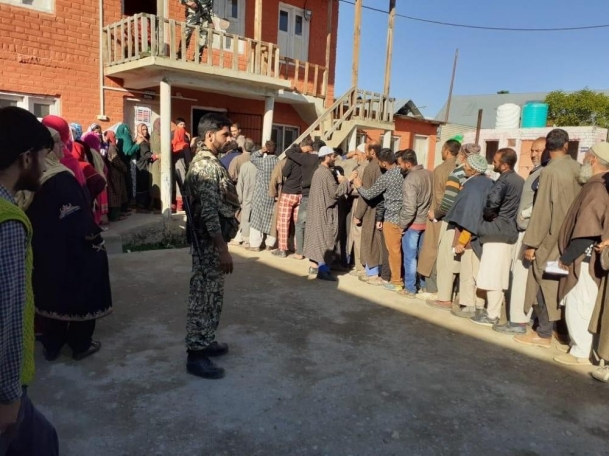 The District Development Council (DDC) polls, the first since the erstwhile state was bifurcated into two union territories last year, recorded around 40 per cent polling in six hours in the first phase on Saturday. The final figures are still awaited.

Cold weather initially affected the turnout and was low as voting began at 7 a.m., officials said. However, as the day progressed and the mercury rose more and more voters were seen outside pollling booths.

According to figures the first phase of DDC elections 2020 recorded voter percentage of 39.7 per cent across different constituencies spread over all the districts of Jammu and Kashmir till 1 p.m.

Raj Mohammad Sarpanch Fakir Gujri on the outskirts of Srinagar said they are voting for development in the area. "We can have a better access with the administration through these elections, which will in turn help us to solve the problems of our area," Mohammad said.

Amid tight security and severe cold as the voting started large crowds though were witnessed in South Kashmir's Krerva. A 95-year-old, Letha Kohli at Faqir Gujri on the outskirts of Srinagar who has voted for many elections in the past said elections will help to bring relief to the people. "Elections will help to end poverty in our area, this will pave way for creation of more roads in our area" Kohli said.

For 43 constituencies going to polls in the first phase a total of 296 candidates are in the fray, 172 from Kashmir and 124 from Jammu.