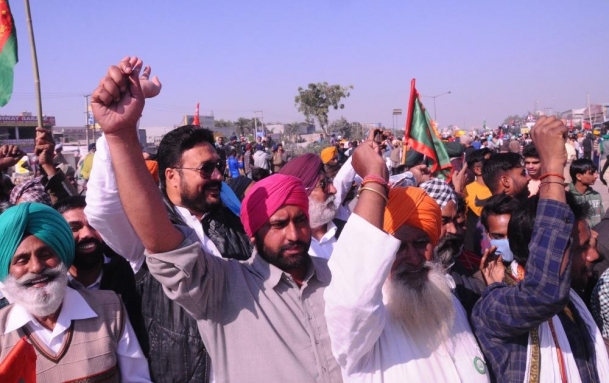 Farmers from Uttar Pradesh have reached the Delhi-UP border at Ghazipur in East Delhi, opening a third front after the Singhu and Tikri demonstration sites bordering Haryana. They tried to get past the heavy barricading by the Delhi Police but were later contained near UP Gate.


Paramilitary force personnel and the Delhi Police have been deployed to restrict the entry of the farmers in Delhi.

In their march towards Delhi, Bharatiya Kisan Union (BKU) supporters and farmers in several districts of western Uttar Pradesh on Friday blocked highways in support of the protesting farmers from Haryana and Punjab.


BKU activists and farmers even blocked the Yamuna Expressway by squatting on the road which led to a massive traffic jam.

Senior police officers including East Delhi DCP Jasmeet Singh were on the spot and supervising the security arrangements. The number of protesting farmers might swell by the evening.

Heavy barricading has also been done at Chilla border in East Delhi, as reports of farmers marching to the Capital came in.

The Delhi Police have already designated the Nirankari grounds in North Delhi's Burari for the farmers to protest, however the farmers who have laid a siege at Singhu and Tikri borders have been reluctant to move to the ground saying their protest might get weakened.

Some of the farmers who went to Burari from Tikri and Singhu border had returned saying it is a strategy to contain them. Many have decided to continue to block the highway. However, a large number of protesters at Singhu border and Tikri border have said that they want to go either to Ramlila ground or Jantar Mantar in Delhi for protesting.

The Delhi Police are keeping a constant vigil on the movement of farmers as they are not allowed to enter Delhi expect the designated Burari ground. - IANS