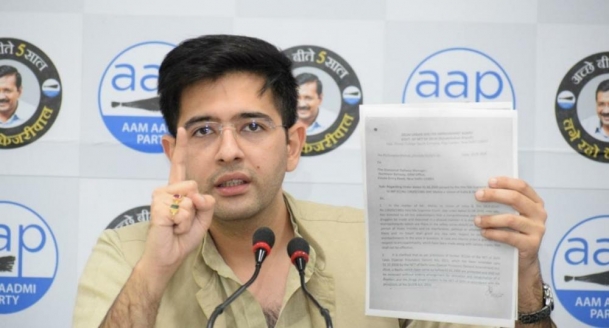 It is now evident that there is competition between the Congress and the AAP to embrace the farmers' agitation. The farmers are now at Delhi's borders and inside the national capital to continue their agitation against the new farm laws.

With the Congress leaders supporting the farmers agitation from Day 1, now the ruling AAP has pitched in its leader Raghav Chaddha to oversee the arrangements in Delhi's Burari for the farmers.

Congress Punjab In-Charge Harish Rawat rejected the allegation that the farmers are being misled. He said that after the new farm laws came into force, it's the farmers who started the agitation, while the Congress has supported their cause in and outside Parliament.

The AAP and the Congress are rivals in Punjab. First the AAP government in Delhi denied Delhi police permission to convert stadiums into temporary jails and now the party has deputed its MLAS to oversee arrangements in Burari.

Raghav Chaddha, AAP MLA said,"Our MLAs, officers and the Delhi government of Arvind Kejriwal are making all the arrangements for the agitating farmers who have got permission to come to this ground".

Even as the Delhi Police on Friday allowed farmers from Punjab, Haryana and elsewhere to hold a peaceful protest against the controversial Agriculture Bills at the Sant Nirankari ground in the capital's Burari area, the farmers refused to leave the Delhi-Haryana Sindhu border fearing that their protest would be "weakened".

Delhi Police made the announcement after using tear gas shells and water cannons on the protesting farmers, and making a baton charge to disperse them as they tried to enter Delhi.

Gurpreet Singh, a farmer associated with Bhartiya Kisan Union Ekta in Punjab, told IANS, "We are holding talks with our representatives as of now to decide whether we will got to Burari ground or not."

Singh said that most of the farmers don't want to go to Burari ground.

"Till the time the government does not accept our three demands, we will sit here," he asserted.  - IANS