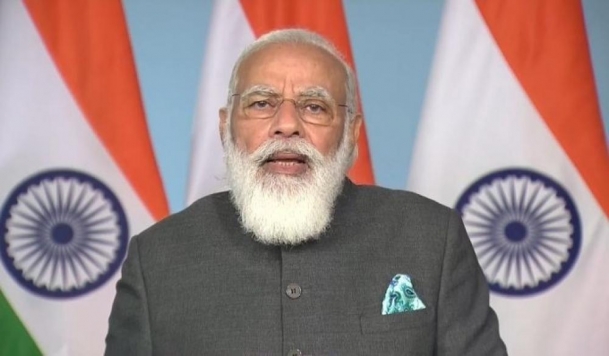 Prime Minister Narendra Modi will be visiting vaccine maker Bharat Biotech's facility here on Saturday as part of his three-city tour to take stock of the Covid-19 vaccine development work in the country.

Modi is scheduled to land at the Hakimpet Air Force Station around 4 p.m. and from there he will reach Bharat Biotech's facility at Genome Valley, where the work is underway on Covaxin, India's first indigenous vaccine for coronavirus being developed by the company in collaboration with the Indian Council of Medical Research.

The Prime Minister will go around the facility to understand the vaccine development process and the preparations by the Bharat Biotech to manufacture the doses in large numbers once the vaccine gets approval from the authorities concerned.

The Bharat Biotech officials will explain to the Prime Minister various aspects of the vaccine development and their rollout plans. The company is currently conducting phase III clinical trials of the vaccine at various centres across the country.

Modi is likely to spend an hour at the vaccine making plant and return to Delhi at 5.10 p.m., official sources said.

Before reaching Hyderabad, the Prime Minister will be visiting the facilities of Zydus Cadila in Ahmedabad where ZyCoV-D is being developed and Serum Institute of India facilities in Pune where AstraZeneca-Oxford vaccine will be manufactured.

There have been speculations that Modi will campaign for the BJP in Greater Hyderabad Municipal Corporation (GHMC) elections, but sources said his programme includes no political activity.

Several national leaders of the BJP, including party chief J.P. Nadda, Union Home Minister Amit Shah and Uttar Pradesh Chief Minister Yogi Adityanath are scheduled to campaign for the BJP over the next couple of days.

The campaign is ending on Sunday for the elections scheduled to be held on December 1. - IANS