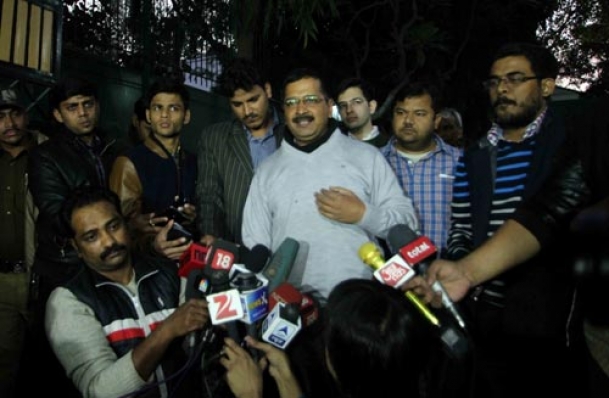 Delhi Chief Minister Arvind Kejriwal on Tuesday accused the CBI of raiding his office in search of a file related to Finance Minister Arun Jaitley. Jaitley rubbished the allegation.

"Rajendra (Kumar) is an excuse, Kejriwal is the target," he said, referring to the chief minister's principal secretary who the CBI alleged was involved in corruption.

But the visibly furious chief minister said the CBI was lying because its officers did search his office.

He said his office didn't maintain files beyond 10-15 days old.

"If they were looking for files of 2007-14 period, what were they looking for in my office?"

They wanted, Kejriwal said, a report of the commission that had probed on his instructions the affairs of the Delhi and District Cricket Association (DDCA), which he alleged was a den of corruption.

Jaitley had been involved for a long time with the DDCA, he said.

"They wanted the file of DDCA... Jaitley figures in it. They came looking for that file," he told reporters outside the residence of Deputy Chief Minister Manish Sisodia where AAP leaders met earlier in the day.

He pointed out that Kumar had held senior positions in the departments of education, IT and VAT.

"If they were looking for proof of corruption, they should be looking for the concerned files in those departments.

"But I do not think the (CBI) action is to check (corrupt) contracts. If he had given out contracts wrongly, those departments should have been raided. The files (related to his alleged corruption) are there."

He also demanded to know why ministers in the previous Congress government and other officers who also signed the supposedly corrupt contracts approved by Kumar were not raided.

Speaking in his characteristic style, Kejriwal said he was firmly opposed to corruption and he would not mind sending his own son to jail if he indulged in corruption.

"Let me tell you Modi ji, you may frighten others with CBI raids. You can't frighten me."

Responding to criticism that he erred by calling Modi "a coward and a psychopath", Kejriwal said he may have used inappropriate language. But he said he would apologise only if Modi did so.

"The prime minister must apologize for his deeds. Then I will apologise for my words." - IANS