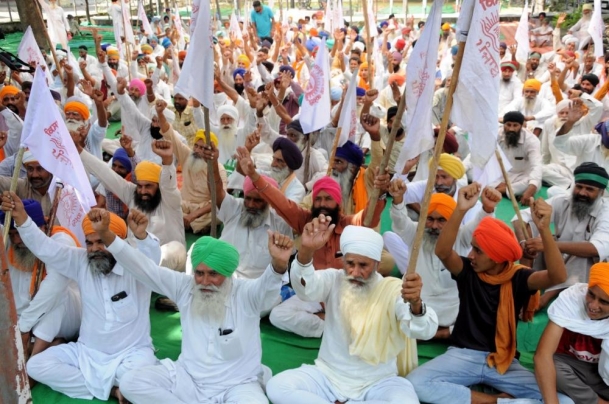 Sarabjit Singh started helping his father in farming since he was 12 years old. Over the decades, he not only diversified the farming activity, but also explored new markets to sell his produce.

At times, Sarabjit and his postgraduate son would drive down to Delhi from his nondescript village in Punjab's Sangrur district, dubbed as the country's grain bowl, to sell vegetables and fruits that they grow along with wheat and paddy.

But this time the 60-year-old farmer, who is just free from selling paddy and sowing the next wheat crop, is daily going from village to village to collect free ration. This is the part of the preparation they are making for laying an indefinite 'siege' of Delhi from November 26.

Singh, incidentally, is not the lone 'warrior' in the social movement.

At least one member from each household in his village is gearing up to seek the axing of the farm laws following the 'Delhi Chalo' slogan and the growing resentment against three agricultural laws passed by Parliament in September.

Farmers believe the free food is important to help sustain the protest movement for long. The dry foodstuff they have been gathering is enough to last three-four months because they know not when their protests will bear fruits.

Singh's Alipur village in Malerkotla tehsil is not an exception.

A movement has been gaining ground at the grassroots across Punjab, which comprises 75 per cent of the farming community, against the 'draconian' laws that the farmers fear they will not be paid even the minimum support price (MSP) fixed by the government and be exploited at the hands of the corporate houses.

However, the Central government has been trying to convince the farmers on plea that the new laws will help farmers increase their income and free them from the middlemen.

Every day tens of thousands of people, largely womenfolk and children riding tractor-trailers, are collecting essentials, largely woolens, wheat flour, rice, lentils and other beans, from village to village in the state.

With traditional folk songs on their lips, a group of men, women and children daily carry out 'prabhat pheris' ahead of the dawn by reminding people on blaring loudspeakers in villages and towns to actively support and participate in the 'Delhi Chalo' campaign.

In the night, the farmers are organising 'mashal' marches.

Also public announcements are being made from religious places in rural areas to join the protest in strength.

"People from all segments are contributing dry rations voluntarily for the 'langars' to be served to protestors who will be sitting in Delhi," said activist Rajinder Gill from Zira village in Ferozepur district.

He said they have also stocked enough diesel to handle any emergency.

"We have been starting our journey towards Delhi tomorrow on our tractor-trailers. Since Delhi is more than 500 km away from here, it will take two-three days to reach Delhi," he said.

Each tractor-trailer will carry foodstuff, beddings, besides utensils to run the temporary open kitchens daily to feed hundreds of protesters and policemen deployed at the protest site, said another activist Sukhbir Singh, adding, "Our volunteers will cook traditional dishes that reflect our rich cuisine and bring protesters together".

And there's also provision to serve the popular sweet 'kheer' along with the meal. For morning and evening tea, they are rationing dry milk powder.

"Our duty is to run the 'langar' thrice in a day for our protester brothers and sisters," said Sarabjit Kaur, who is going along with 10 volunteer chefs.

Farmer body Bharatiya Kisan Union (BKU) Ekta Dakonda President Buta Singh Burjgill said the 'langar' (free meal service) will go on until the Central government takes back the laws. "It will be a historic protest in Delhi amid the presence of two lakh farmers. We won't go back from our protest even half an inch."

He said they would stage a sit-in protest wherever they would be stopped while proceeding towards Delhi.

Another faction leader Balbir Singh Rajewal of the BKU on Monday appealed to farmers and their well-wishers to come on the roads on November 26 to protest against the 'black' laws.

"It's Punjab Chief Minister Amarinder Singh's duty to lead from the front to get their grievances resolved, but unfortunately he is playing as per the Centre's script," he said in a tweet.

Stepping up his efforts to resolve the crisis, the Chief Minister last week urged the Centre to show magnanimity and to support the state in creating a congenial environment for ending the prolonged farmers' agitation.

It was the joint responsibility of both, the state and the Central governments, to provide a conducive environment for resolving the current crisis resulting from suspension of train services, said the Chief Minister, who is likely to hold meetings with the Prime Minister and the Union Home Minister in Delhi.

Neither Punjab nor the nation could afford to allow the situation to continue indefinitely in this manner, he has stressed, pointing to the crores of rupees in losses being suffered by the industry and economy in the state.

The agriculture sector was also badly affected as the movement of foodgrains, fertilizers, urea, etc., had been hit hard due to the rail blockade, he added.

Up in arms, representatives of farmers across the country on November 19 unanimously decided here to rally in Delhi on November 26 to lodge their protests.

They decided on this issue after their parleys with the Union Ministers remained inconclusive.

The farmer leaders warned the respective state governments that if they were stopped from proceeding towards Delhi, they would stage indefinite protests en route. They also demanded permission to rally at the Ramlila Maidan, failing which they threatened to block entry points to Delhi from Haryana and Uttar Pradesh.

With only 1.57 per cent of the country's total population, Punjab contributes 40 per cent to the national food pool. - IANS