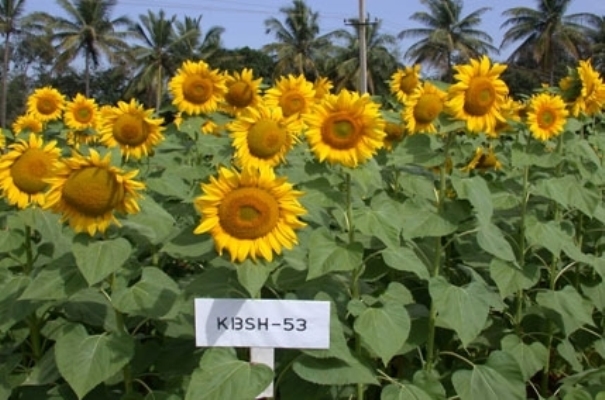 IIndian sunflowers are blooming in Uganda, thanks to University of Agricultural Sciences in Bengaluru (UAS-B) transferring their hybrid seed know-how to the East African country, an official said on Wednesday.

"We have recently transferred the germplasm technology of hybrid sunflower variety (KBSH-53) to Uganda, as another variety (KBSH-41) is already popular in the African country," the university's Research Director Y.G. Shadakshari told IANS here.

The seed know-how was transferred under an agreement between the two countries through the National Bio-diversity Authority at Centre and the state.

With modified equatorial climate, Uganda is a landlocked country around Kenya, Sudan, Congo, Rwanda and Tanzania in East-Central Africa.

"Uganda has shown interest in our variety of sunflowers, whose edible oil is used for cooking a variety of dishes. Seed varieties KBSH-53 and KBSH-78 were developed as part of the agreement. The new variety (KBSH-53) will be used for cultivation after it is cleared through field tests," said Shadakshari.

Once the Ugandan regulator certifies the Indian variety, its seeds will be given to the local farmers for growing the sunflowers, which bloom and blossom facing the sun.

"The sunflower sector in Uganda made a significant contribution to its economy, as is evident from 2017 data, when 2.4 lakh hectares of land was used for growing the edible flowers," recalled Shadakshari.

Sunflower is used to make assorted oils, animal feeds and its seeds are used as snacks.

"Though sunflowers are popular in India as cooking oil and animal feed, its seeds are used for snacks in Uganda, where the demand for the Indian variety has been growing," asserted Shadakshari.

As the maturity period of sunflowers is 120-150 days after sowing and planting, the farmers have to factor the growing period for harvesting the crop, but the new variety KBSH-53 can be harvested within 85-90 days. It is also pest resistant.

"Sunflowers grow best on well drained, high water-holding capacity soil with a neutral pH 6.5-7.5. The optimum soil classification for them is loam, silty loam and silty clay loam soils," the director pointed out.

He added that the University has not demanded any royalty from them, instead it has issued a licence for a fixed sum to allow them to use this technology for a period of five years.

Another UAS-B scientist on the condition of anonymity said that the technology had to be transferred due to cultivation of sunflower drastically came down from somewhere about 50 lakh hectares about a decade ago to mere 1.7 lakh hectares but still Karnataka is the largest sunflower growing state in the country.

"Over the last one decade, farmers who were sowing sunflower have migrated to other profitable less work intensive crops like cotton and maize, as a result of this the UAS-B could not supply the required quantity of seeds that were in demand by Uganda," he explained.

Uganda's seed procurement demand was annually about 350 to 400 quintals as sunflower farmers switched over to other crops, the university thought it was appropriate to transfer its seed technology to Uganda.

Sunflower production performance on reduced agricultural capacity soil, such as those affected by salinity, drought or wetness is not ideal, the director added. -IANS