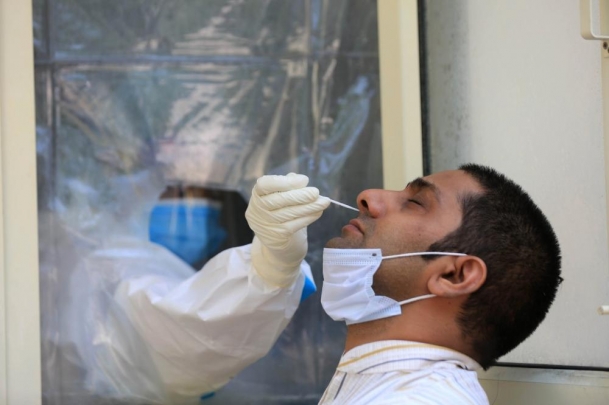 In view of the third wave of Covid-19 infection underway in the national capital, the Centre has advised the Delhi government to increase targeted testing and build medical care capacity to control the surge of patients incoming, informed the union health ministry in a press conference on Tuesday.

"In the meetings, we drew the attention of the Delhi administration to increase testing at spots with potential to increase infection like markets, workplaces, factories and places of religious gathering. The UT administration has started acting upon it," he shared.

He also said that the Delhi administration was further advised to enhance the capacity of beds, oxygen and other medical equipment required for the patients' care infected by the viral disease.

The latest upsurge of Covid-19 numbers has brought a collapse of healthcare facilities in the national capital. For over a week, there has been a rising scarcity of ICU ventilator beds across 96 hospitals in the capital city designated for the treatment of Covid-19. The patients are running pillar to post just to occupy a single bed.

When asked if the daily tally of infection would cross 15,000 a day in the coming weeks, Bhushan said that it cannot be predicted. "The adherence or disregard to preventive measures decides whether the cases would rise or fall. We can predict such things any number or go by any estimate quoted by an individual," Bhushan said.

However, the prediction was foresighted by the National Centre for Disease Control (NCDC) itself which comes under the Union Health Ministry. The NCDC, in a report drafted recently, had warned that Delhi needs to be prepared for about 15,000 Covid-19 cases daily, taking into account the upcoming winter season, related respiratory problems, large influx of patients from outside and festive gatherings.

Bhushan also did not reveal the stand of the Centre on the point of community transmission stage which the health experts expect to have hit the national capital. Such things are based on facts, figures and data. We cannot announce it just like that.

His statement is in contradiction to the Union Health Minister Dr. Harsh Vardhan, who had admitted weeks ago that India is in the throes of community transmission. However, he added that it is limited only to certain districts and states. After Maharashtra, Delhi is the second region where daily new infections of Covid-19 are crossing 5,000-mark every day.  -IANS