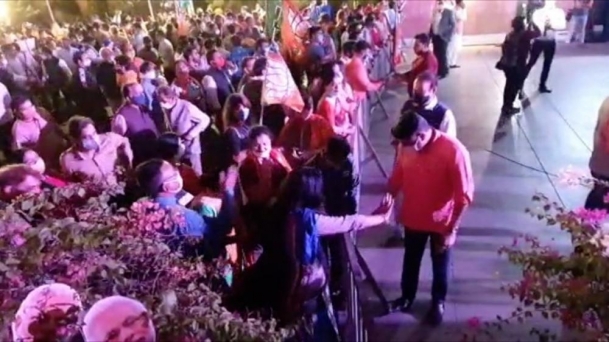 BJP supporters gathered outside party's Delhi headquarters broke down all the barricades on Tuesday ahead of national president J.P. Nadda's arrival, even as results of the Bihar Assembly polls and states' bypolls were still trickling in.

Security deployed from preventing chaos could not prevent the deluge of exuberant party workers as they jumped barricades to wish and welcome him. And this was even before his arrival.

BJP has virtually swept bypolls in Uttar Pradesh, Gujarat, Madhya Pradesh, Karnataka and Manipur; even in Bihar they have done considerably better than the last Assembly polls.

The supporters opened the end of the barricades between the pathway that was kept to separate crowd from mobbing Nadda, as preparations were still afoot to welcome him.

The charge of the security of the premises was taken over by the Delhi Police as per the protocol.

The fate of the Nitish-led JD(U) government will be decided today as election results to the 243-member legislative assembly will be declared.

The counting of votes began at 8 am at 55 centres across 38 districts. In the Grand Alliance, RJD contested on 144 seats and Congress on 70.

Results of bypolls were still coming in at a few places. - IANS