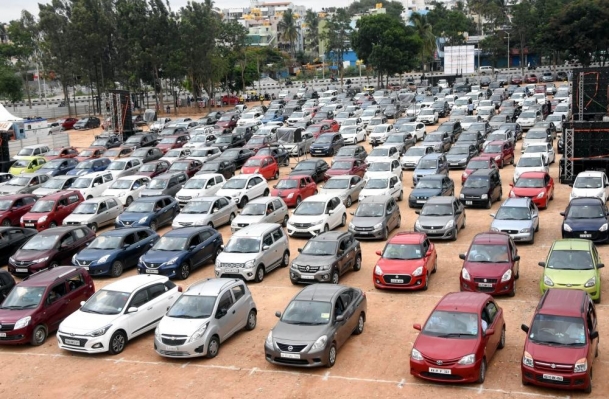 However, sales remained in the red on a year-on-year basis.

The Federation of Automobile Dealers Associations data showed that vehicle registration in October rose to 14,13,549 units from 13,44,866 units sold in September.

"October continues to see positive momentum on monthly basis but on a yearly basis, the negative slide continues to increase. The 9 day Navratri period witnessed robust vehicle registrations but could not save October from going in red as compared to last year when both Navratri and Diwali were in the same month," FADA President Vinkesh Gulati said.

"While new launches continued to be in demand in passenger Vehicle segment, entry level motorcycles witnessed a lean demand in 2-wheeler segment. With supply side mismatch, most of the passenger vehicle dealers ended with limited stock of high selling items and odd variants which did not attract much demand. This coupled with lower discounts, compared to last festivals also played a spoilsport."

"FADA urges the government to urgently announce an attractive incentive based 'Scrappage Policy'. It also requests the government to release funds for infrastructure projects which it has awarded as this will help demand generation and will lead to higher production of vehicles."

On a yearly comparison, passenger vehicles retail sales declined by 8.80 per cent to 2,49,860 units from 2,73,980 units off-take during the like month of last year.

In its outlook, FADA said: "As we enter the last leg of festivals and with Covid getting into its 3rd wave in many cities, there is a sense of cautiousness amongst customers. Due to the lockdown announced in few European countries, procurement of spares will also be a cause of hinderance for smooth supply of vehicles in Indian markets."

"This will create a supply and demand mismatch thus affecting the passenger vehicle sales. FADA once again cautions both OEMs and Dealers to keep a check on vehicle inventory as post festivals, demand may remain subdued." - IANS