'T Natarajan is a find of this IPL' 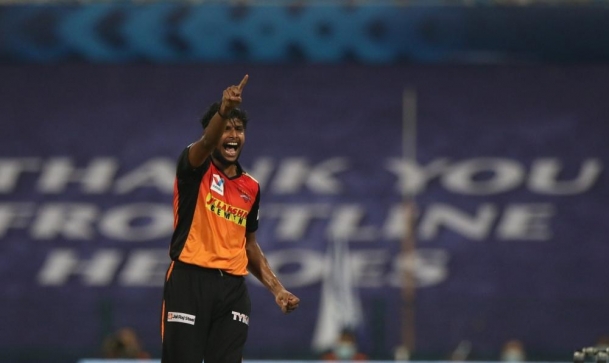 Even though SunRisers Hyderabad couldn't make it to the finals of the Indian Premier League (IPL) 2020, they were plenty of reasons for the team to be proud of - one of which was the performance of left-arm pacer T Natarajan.

SRH's journey in IPL 2020 came to a disappointing end on Sunday evening as they suffered a 17-run defeat to Delhi Capitals in Qualifier 2 at the Sheikh Zayed Stadium to bow out of the competition.

However, despite the roller-coaster ride and a season where SRH couldn't come out with their "best" cricket - as stated by Kane Williamson, Natarajan's performance was something which earned praise from all quarters.

The left-arm pacer bowled the most number of yorkers in the season and was regarded as the 'yorker king' for his heroics. The 29-year-old finished with 16 wickets from 16 matches and finds himself at the 10th spot in the list of leading wicket-takers in the tournament before the final.

"Natarajan has been...waiting in the wings. So to get that chance, to have an IPL the way he has is outstanding. Natarajan is a find of this IPL," said SRH skipper David Warner after their defeat against the Delhi Capitals.

Natarajan bowled a total of 377 deliveries this season and conceded 504 runs, with an economy rate of 8.02. However, his bowling in the death overs, especially his ability to bowl yorkers on a consistent basis, was something which made former cricketers take notice of his skills.

One of his yorkers which caught the eye of many was against Royal Challengers Bangalore in the Eliminator when he got the priced scalp of AB de Villiers. In the 18th over of RCB innings, Natarajan stunned de Villiers with a perfect yorker, and hit the timbre.