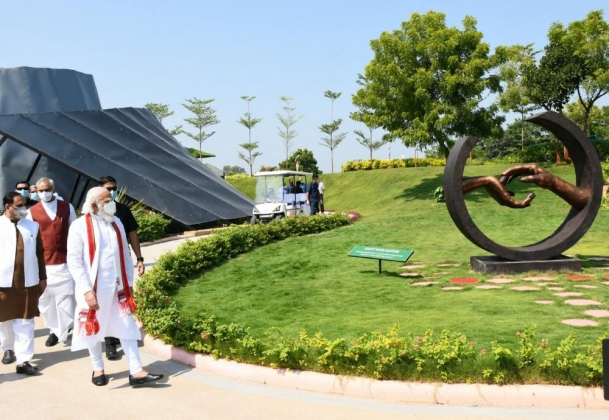 Prime Minister Narendra Modi inaugurated the dynamic lighting for the Sardar Sarovar Dam on Friday evening. He also unveiled the website of Statue of Unity in all the UN official languages and launched the Kevadia App, at the Unity Glow Garden. PM Modi also inaugurated the Cactus Garden.

The Unity Glow Garden is an unique theme park spread over an area of 3.61 acre. It has an glimmering array of installations, figures and optical illusions which will welcome tourists to experience the joy of night tourism.

Meanwhile the Cactus Garden that the PM inaugurated, is a "grand architectural greenhouse" with 450 national and international species from 17 countries. It has around 6 lakh plants including 1.9 lakh cactus plants in an area spread over 25 acre.

Earlier, he inaugurated Sardar Patel Zoological Park and Geodesic Aviary Dome in Kevadia. PM Modi dedicated 17 projects to the nation under Integrated Development of Kevadia and laid the foundation stone for 4 new Projects.

Earlier in the day, Prime Minister Modi arrived in Ahmedabad for a two-day visit to Gujarat. During the day, he inaugurated the world's first ever technology driven nutrition park for children, Ekta mall, Aarogya van amid other projects.- IANS