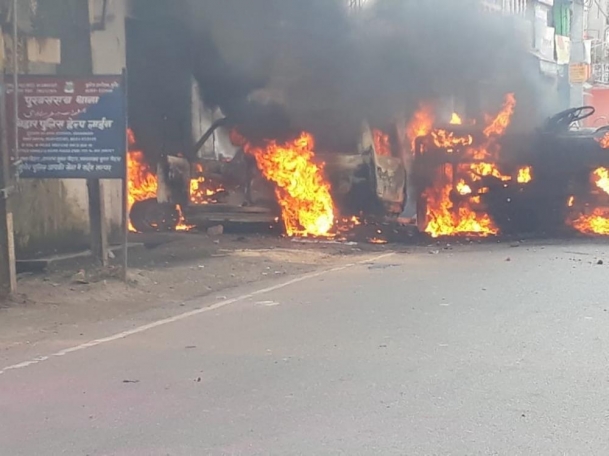 An angry mob on Thursday vandalised the office of the Superintendent of Police and attacked a police station in Munger district of Bihar.

Meanwhile, the Election Commission has ordered the removal of District Magistrate Rajesh Meena and Superintendent of Police Lipi Singh in view of the situation in Munger. The investigation into the incidents has been given to the Divisional Commissioner of Magadha, who will submit his report in seven days. The new District Magistrate and Superintendent of Police will be posted today (Thursday).

Earlier, a violent clash had erupted between the police and people on Dussehra during the Durga idol immersion in which one person had died.

The relatives of the deceased on Thursday alleged that the man had died in police firing and demanded action against the police.

A police official said that a mob took to the streets on Thursday and started pelting stones at Vasudevpur Police Outpost and Purabsarai Outpost. Thereafter, the mob set the outposts ablaze.

An officer posted in Vasudevpur OP said that around 150-200 people suddenly came and started pelting stones at the OP and then set it ablaze. "We somehow managed to save our lives," he said.

A mob also burnt vehicles in the police station. In addition, the Superintendent of Police Office and residence of the Sub-Divisional Officer (SDO) were vandalised.

Tension is prevailing in the area after the incident and additional police has been deployed in the city.

Earlier, on Dussehra on October 25, a clash took place between police and local people during the Durga idol immersion. A man, Anurag Kumar, was killed in the incident and many others received injuries. Thereafter, amid the Bihar Assembly elections, many political parties made an issue out of the incident and targeted the state government.

Rashtriya Janata Dal leader Tejashwi Yadav demanded strict action in the case and a probe by a retired High Court judge. He compared this incident to Jallianwala Bagh. Chirag Paswan of the Lok Janshakti Party also lashed out at the government over the incident. - IANS