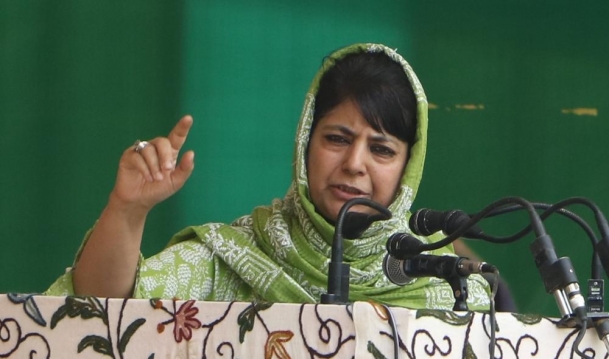 Lashing out at the Centre, former Jammu and Kashmir Chief Minister and Peoples Democratic Party (PDP) President Mehbooba Mufti said on Friday that she won't raise any other flag till the flag of the erstwhile state of Jammu and Kashmir is restored.

Mufti appeared before mediapersons with the flag of the erstwhile state of Jammu and Kashmir and her party flag placed in front of her at her residence on the Gupkar road in Srinagar.

In her first press interaction after she was released from her 14-month long detention, the former Chief Minister said that her fight is not confined merely to the restoration of Article 370, but for the resolution of Kashmir issue as well.

"Our relationship with our national flag is not independent of the flag of the erstwhile state of Jammu and Kashmir. When we get that flag, we will raise the Indian flag as well," she said.

"Till the time we get back the flag that was robbed from us, we will not raise any other flag," she added.

Mufti said that people have made sacrifices for the resolution of the Kashmir issue and it is now the turn of the leaders to do their bit.

She said the Centre is not interested in the people of Jammu and Kashmir, but just the territory of Union Territory.

"They are not interested in the people of J&K, who are expendbles for them. What they want is territory, which was already with the people by legal means till August 5 last year. But they broke their relationship which was the basis for accession. We had acceded to a liberal, secular and democratic India, we are not comfortable with today's India," she said.

Mufti said she has nothing to do with the elections but party leaders will decide on the issue and the People's Alliance for Gupkar deceleration signatories will take a call on the matter.

"We had boycotted the panchayat elections. We will speak to our workers, and the alliance will take a call on the issue of elections. As far as I am concerned, I will not contest any election without the flag of the erstwhile state of Jammu and Kashmir and the constitution," she said.