﻿A first in India: Critically endangered vultures introduced into wild 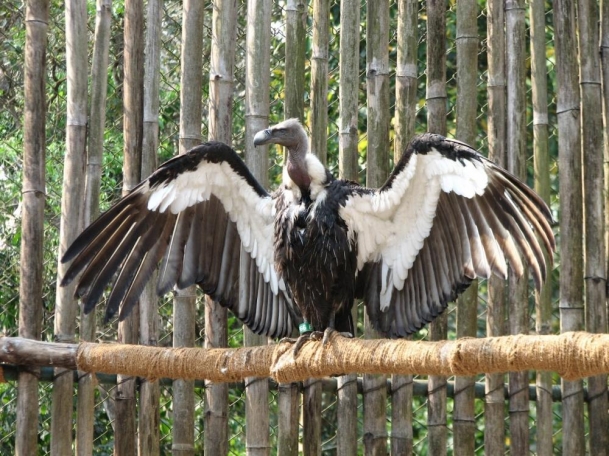 After years of grit and determination, eight critically endangered white-rumped vultures, six of them captive-bred, were reintroduced into the wild on Thursday for the first time in India since the vulture conservation and breeding centre was set up in the lower Shivaliks near here in September 2001.

For biologists, the release of the vultures is a landmark occasion after January 2007 when the first white-rumped chick was born in captivity in the centre.

"The release of vultures is a great occasion for the biologists across the globe. The next crucial step is ensuring the safety of the environment in vulture safe zone,an excited Vibhu Prakash, Bombay Natural History Society (BNHS) Principal Scientist and centre head, told IANS.

The released vultures, comprising six captive-bred and two rescued ones from the wild, are of the age seven-eight years.

Each of them has been tagged with a 30-gram device for satellite transmitter that allow them to monitor their movements and survival, Prakash explained.

Nepal was the first country in Asia to release eight captive-bred white-rumped vultures in November 2017 but this release is the first in India, and a major step.

The centre is located on the edge of the Bir Shikargaha Wildlife Sanctuary in Morni hills, where the eight vultures were released.

It is a joint project of Haryana and the BNHS which has had major support from the UK's Royal Society for the Protection of Birds (RSPB), The Rufford Foundation and the British government's Darwin Initiative for the Survival of Species Fund -- to establish the centre and investigate the catastrophic declines of three critically endangered Gyps species of vultures in India.

At the Pinjore centre, three of the nine Indian species of vultures -- the white-rumped, the long-billed and the slender-billed -- have been bred in captivity after their populations crashed by 90 per cent in the mid-1990s. The birds are now listed as Critically Endangered listed by the IUCN, the highest threat category ahead of extinction.

Prakash, who along with his wife Nikita devoted their life for conserving vultures, said the Covid-19 pandemic has delayed their release that was earlier planned in April.

The Bir Shikargaha sanctuary has been declared a vulture safe zone. The sanctuary extends transboundary into Himachal Pradesh where the wildlife awareness among the villagers is quite high.

"We will monitor the behaviour of vultures in the wild through the satellite transmitters. If any of the released vulture die or get injured, we can quickly recover them and determine what happened. The satellite telemetry will be key for us to know the cause of death and prevent other vultures dying from that cause," he said.

The vulture, a nature's scavenger, cleans the environment of animal carcasses. Villagers rely on them to dispose of cattle carcasses.

The reason, say biologists, for bringing the vultures to the brink of extinction in South Asia mainly to the extensive use of diclofenac in treating cattle. Vultures that consumed the carcass of animals treated with diclofenac died with symptoms of kidney failure.

The Indian government banned its veterinary use in 2006, and although this was a crucial step, it has not been fully effective, and there are also now other vulture-toxic drugs in use, warn scientists.

Chris Bowden of the Royal Society for the Protection of Birds, who has been coordinating the programme in South Asia, told IANS on phone: "This release shows we are moving to a new phase in this extraordinary story -- and even though the careful monitoring results within 100 km, which includes five neighbouring states, have shown that diclofenac levels have declined since the national ban was declared 14 years ago"

"But unfortunately," he warned, "it also shows there are still significant and alarming amounts of the drug out there, and so this release is a very important trial".

BNHS scientist Prakash said, "If there is no toxicity-related death of these eight birds in two years, then we will go for release of 20-25 birds each year."

"We are planning to introduce 100 pairs each of the three species of white-backed, long-billed and slender-billed in the wild in the next 10 years. Before that, findings from the first released batch will be crucial in the future programmes."

The long-billed and slender-billed vultures will be released in Madhya Pradesh and Assam respectively.

Prior to this release, two captive Himalayan griffon vultures were released in the wild in June 2016 from the Pinjore centre on an experimental basis.

Both birds were wing-tagged and leg-ringed for identification, but not tagged with satellite transmitters.

This release is a preliminary test of Asia's first Gyps Vulture Reintroduction Programme under which the captive-bred birds are to be introduced in the wild, and has been helpful in developing plans for these more significant and endangered birds.

An elated Bowden added: "The Pinjore centre has become the focal point for vulture conservation in Asia, having played a key role in a timely manner for establishing captive populations of vultures, and indeed the detection of the main culprit diclofenac and other drugs."

"The safety-testing of other drugs like nimesulide by the Indian Veterinary Research Institute with the BNHS there is yet another crucial element which urgently needs to speed up.

"We really hope these released birds will survive, but there is a lot more to do to ensure their environment is safe. For example one further drug, Aceclofenac, which is still in legal veterinary use, has been scientifically demonstrated to convert immediately to diclofenac in cattle, so poses the same threat to vultures, and although earlier steps to ban this were underway, but have not yet resulted in action."

"But let's at least celebrate this step today and monitor how the birds fare with great interest," Bowden added.