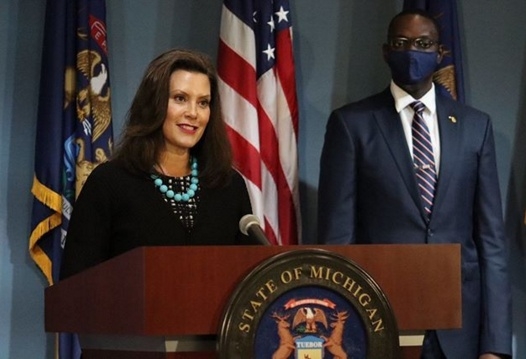 At least 13 people have been charged in a domestic terror plot to abduct Gretchen Whitmer, the Democratic Governor of the US state of Michigan, officials said.

Addressing the media on Thursday, Michigan Attorney General Dana Nessel said that six people were charged federally with conspiracy to kidnap, and the seven others, associated with the militia group "Wolverine Watchmen", were charged by the state, CNN reported.

"The individuals in (state) custody are suspected to have attempted to identify the home addresses of law enforcement officers in order to target them, made threats of violence intended to instigate a civil war, and engaged in planning and training for an operation to attack the capitol building of Michigan and to kidnap government officials, including the governor of Michigan," Nessel was quoted as saying.

In a CNN interview on Thursday night, Whitmer thanked the law enforcement for making the arrests.

"This is unlike anything we have seen before. The brave men and women of these two police organizations put their lives on the line to keep me and my family safe.

"I'm incredibly grateful and humbled by the work they do," she said.

In televised remarks earlier in the day, the Governor specifically blamed President Donald Trump, saying: "Just last week, the President of the US stood before the American people and refused to condemn white supremacists and hate groups like these two Michigan militia groups.

"'Stand back and stand by', he told them Hate groups heard the President's words not as a rebuke, but as a rallying cry, as a call to action. When our leaders speak, their words matter. They carry weight."

"President Trump has continually condemned white supremacists and all forms of hate," McEnany said in a statement to CNN.

"Governor Whitmer is sowing division by making these outlandish allegations. America stands united against hate and in support of our federal law enforcement who stopped this plot."

The Federal Bureau of Investigation (FBI) learnt of the abduction plot earlier this year through a social media group of individuals.

"They discussed different ways of achieving this goal from peaceful endeavours to violent actions... Several members talked about murdering 'tyrants' or 'taking' a sitting governor," CNN quoted a federal criminal complaint as saying.

According to a CNN report, Governor Whitmer has been the target of multiple death threats in light of her coronavirus response efforts and decision to issue stay-at-home orders.

In April, protesters and extremists gathered at the state Capitol for a rally, and called for Whitmer to lift her stay-at-home order.

Earlier this year, armed protesters entered the state capitol, where it is legal to openly carry firearms, and demanded an end to Michigan's state of emergency. - IANS